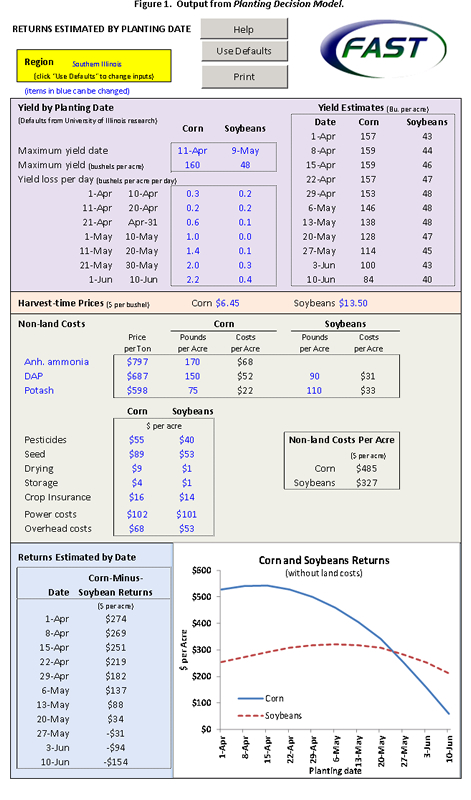 Yield by planting date: Yields for differing planting dates are taken from research conducted by Emerson Nafziger and Vince Davis, as presented in The Bulletin, a publication of the Department of Crop Sciences, University of Illinois ( download “Corn Planting Date Revisited” released on April 10, 2009 here and “Should I Start Planting Soybeans in April released on April 23, 2010 here).

Non-land costs: The model includes defaults based on University of Illinois budgets. Current costs are high from a historical perspective, with the difference in corn and soybean costs approaching $200 per acre. 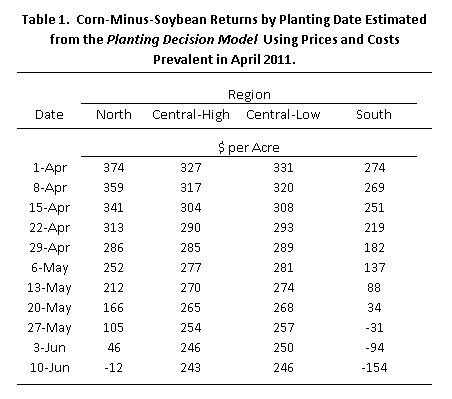 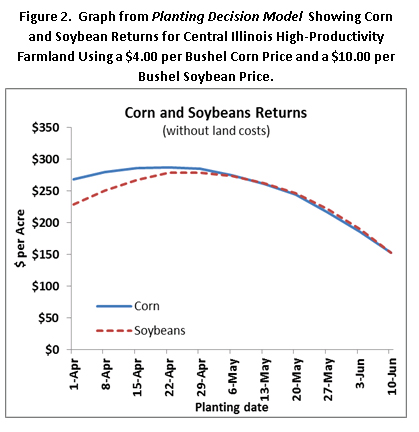 Commodity prices play a large role in determining corn-minus-soybean returns. The $6.45 price for corn and $13.50 price for soybeans favor corn production by a much larger margin than more typical prices are $4 per bushel for corn and $10 per bushel for soybeans. For central Illinois farmland of high productivity, a $4 corn and $10 soybean price causes corn-minus-soybean returns to turn negative in the second week of May and the difference in corn and soybean profitability would be much smaller, as illustrated in Figure 2 which shows a corn and soybean returns graph produced by the Planting Decision Model. Hence, changes in commodity prices will impact estimated returns by planting date.

The Returns Estimated by Planting Date sheet in the Planting Decision Model will be useful in evaluating whether to switch from corn to soybeans. In southern Illinois, soybeans begin to be projected more profitable than corn towards the end of May. Switching for northern and central Illinois likely occurs in June. Switching dates are sensitive to corn and soybean prices.