Policy debates are currently dominated by the budget. While this is true regardless of whether or not the topic is agriculture related spending, the heat has been put on ag spending – specifically farm programs – in many recent popular press articles. It is not difficult to find criticisms of farm programs and claims of their partisan motivations,and attacks against proposals which seem light on farm program spending cuts. The relatively healthy ag economy and significant increase in farm income levels over the past few years are the most often argued points against the current design of farm programs, and have made it increasingly difficult to continue to justify the need to support and smooth farm incomes.

Over the next few weeks we will provide a series of posts which analyze some of the farm policy issues currently being debated and proposed changes to the design of the farm safety net (i.e. commodity programs, crop insurance, and disaster assistance). Today, we provide some context for these issues by taking a look at federal spending on farm commodity programs and crop insurance, and comparing those expenditures to spending on other USDA programs as well as budget items outside of the USDA and the farm bill.

Table 1 reports actual spending as a percentage of total federal outlays across a number of programs for 2009. USDA spending on commodity and crop insurance programs represented less than 1% of total spending. Program spending on social security and defense is roughly 40 times that of these farm programs.

While total spending on USDA programs represents a larger percentage of total federal outlays, it has declined from approximately 6 percent of total federal spending from the late 70s through the mid 80s to between 3 and 4 percent of total spending over the past 15 years. Commodity programs and crop insurance represent a relatively small portion of this total USDA spending. A much greater portion of the USDA’s budget is devoted to food, nutrition, and consumer services, as illustrated in Table 2. 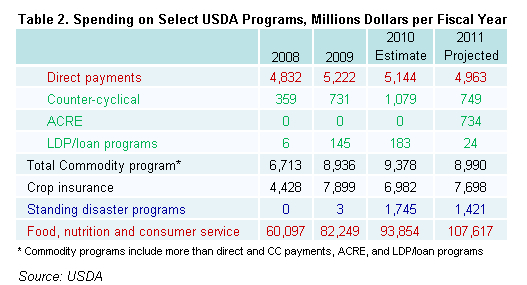 Table 2 reports fiscal year (FY) spending on selected USDA programs. Since 2008, total commodity program spending has ranged from $6.7 billion to approximately $9 billion. Roughly $5 billion of this is for direct program payments. Crop insurance spending has increased over time and is now approaching the same level as that of commodity programs with spending ranging from about $4.5 billion to more than $7 billion per year since 2008. Standing disaster assistance (SURE), introduced in the 2008 farm bill, is estimated to generate about $1.7 billion in spending in FY 2010 and projected to have about $1.4 billion in spending for FY 2011. In contrast, USDA spending on food, nutrition, and consumer service programs (e.g. the Supplemental Nutrition Assistance program, more commonly known as food stamps) has increased from $60 billion in FY 2008 to more than $100 billion projected for FY 2011.

So what do these percentages and dollar amounts mean in terms of future cuts to farm program spending or modifications to existing programs? One could argue that these numbers show that 1) in relative terms, spending on USDA programs has already been declining over time, and 2) spending on actual farm programs, such as commodity programs and crop insurance, represent a small portion of USDA spending and a very small portion of total Federal spending. Therefore, the contribution that cuts to agricultural programs can make to meeting overall budget reduction goals is also relatively small. For example, completely eliminating the direct payment program – and its $4.9 to $5 billion per year price tag – would provide just a small portion of the total budget cuts being called for in FY 2011 and beyond.

However, the fact that farm incomes are at all time highs is an impossible fact to ignore. Furthermore, many of the programs which comprise the farm safety net provide overlapping coverage to producers suggesting that modifications could be made which would increase spending efficiency as measured by benefits to producers generated per dollar of taxpayer spending. Identifying these inefficiencies and making program modifications to eliminate or reduce them, rather than simply eliminating or making large cuts to existing programs, could potentially result in a collection of farm programs which provides an effective safety net at a reduced cost to taxpayers.