U.S. farm subsidies are often villified because a “disproportionate share of the benefits” go to large farms. In some sense, this shouldn’t be surprising; farm subsidies are designed to pay farms for their productivity. Farmers receive a subsidy for each bushel (or pound, depending on the commodity) they produce. Produce more bushels, get more subsidies. Even more productive land receives higher subsidies (through Direct and Counter Cyclical Payments).

The real problem here is the standard of “fairness.” Subsidies are a negative tax, but when we talk about taxes we don’t complain that they are “unfair” because the wealthiest 5% of Americans pay 59% of all tax revenue (in 2008). You don’t hear, “we should reduce taxes on the rich because they pay a disproportionate share of total tax revenue.” Even if you did hear someone say that, you wouldn’t take them seriously. That’s not how we as a society have decided to measure the “fairness” of the tax system.

So, are farm subsidies progressive or regressive? Before we can answer that, we need to establish a standard by which to measure subsidies’ progressivity. We could use farmer income, which is the same standard we use when talking about taxes. But remember, farm subsidies are essentially paid to businesses (the critics won’t let you forget that ) and businesses seem to have all sorts of accounting tricks to inflate or deflate their income.

A more consistent approach would be to use business revenue or assets as the yardstick by which to measure the fairness of farm subsidies. Under this approach, a “fair” subsidy would be higher, relative to their sales or assets, for small farms than large farms. Intuitively, this type of subsidy gives small farms an opportunity to leverage the subsidies and become bigger and minimizes large farms’ ability to use the subsidy to grow.

Ironically, U.S. farm subsidies are progressive under this standard, and have been for some time. Below is a graph taken from a report by the Government Accountability Office (GAO) in 1984. Subsidies are 10% of sales for small farms but only 4% of sales for large farms. 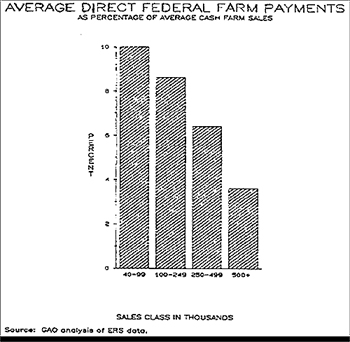 More recent data paint a similar picture. Using the 2002 Census of Agriculture, I calculated subsidies as a proportion of farm sales 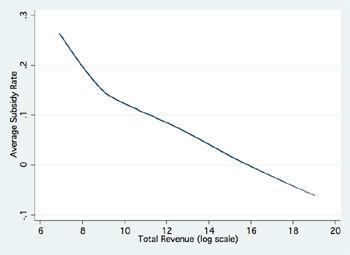 And, using the Census of Agriculture from 1987 – 2002, here is the progressivity of farm subsidies relative to a farm’s total assets 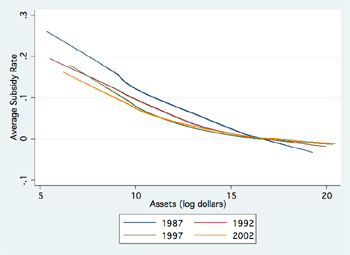 More about these graphs and the distribution of farm subsidies can be found here .

(NB: the lines dipping below zero are an artifact of the estimation technique (loess); no one in the data had negative subsidies)

Growing up on a farm, I learned to fix almost anything with some bailing wire, a hammer, and some duct tape. Sometimes the fix was intentionally temporary–while we waited for the right part; sometimes we hoped it would last b/c it would be too expensive to “do it right.” Well, you know what they say, “hope in one hand….” Permanent solutions invariable required the right tools and the right parts.

The Internet is an excellent tool for one of the primary missions of land-grant schools: outreach and extension. Farmdoc is a prime example of the innovative, forward-thinking that goes on around me here at the University of Illinois. It’s extension and outreach for the 21st century, delivered by the Internet. The farmdoc folks recently started blogging, and I had the opportunity to cross-post my “Progressive” subsidies post there yesterday. There have been a few interesting comments.

The comments consistently observe that subsidy progressivity doesn’t capture all facets of the agricultural-subsidy issue. Unlike the income tax, which is ubiquitous (just like death), only a small slice of the population receives farm subsidies. Measuring the progressivity of subsidies might not be useful when comparing subsidy recipients with non-recipients.

Fair comment. So is measuring subsidy progressivity ever useful? Yes. It is a useful tool when looking at the distribution of agricultural subsidies among farms that receive them. Too often the policy debate is clouded by the argument that, “subsidies go to ‘big program-crop producers’ but not to the little guy with an acre of vegetables.” This rhetorical fallacy conveniently overlooks the “little program-crop producers.” If we should care about small family farms, then we should care about all of them. My point is, among farms receiving subsidies, the distribution of subsidies is “fair.” Progressivity is the right tool for the question. 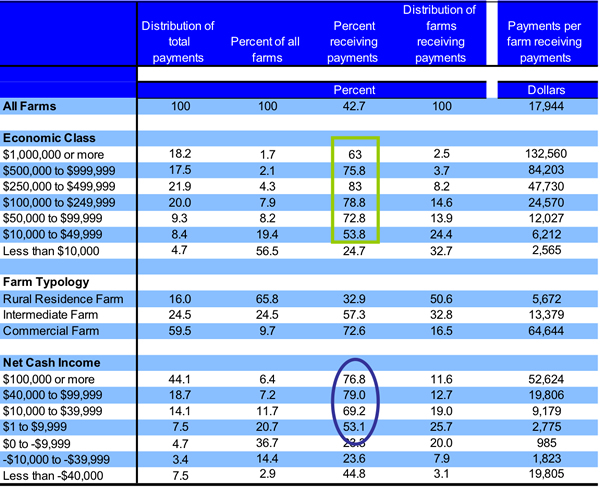