The soybean market is increasingly looking to prospects for the 2011 U.S. crop for price direction. Still, the projection for small year-ending stocks of soybeans means that the on-going rate of consumption will have some price influence. The Census Bureau’s estimate of the size of the domestic crush during March was released today. That report revealed a continuation of the slow pace of the domestic crush.

For the year, the USDA projects the domestic crush at 1.65 billion bushels, 102 million bushels (5.8 percent) smaller than last year’s crush. The magnitude of the crush is driven by soybean meal demand since meal is not storable and soybean oil is easily stored. From September 2010 through February 2011, domestic soybean meal consumption exceeded that of a year ago by 2 percent, but exports were down by 21 percent. Total consumption was off by 5 percent. Today’s report revealed that total meal consumption in March was 14 percent less than in March 2010. In addition, the average yield of soybean meal per bushel of soybeans crushed so far this year was one percent higher than in the previous year. As a result of reduced meal consumption and a slightly higher yield of meal per bushel of soybeans, the monthly soybean crush has been below that of the previous year since October 2010 (figure 1). The crush during the first 7 months of the marketing year was 81 million bushels (7.4 percent) smaller than during the previous year. The crush during March, as reported today, was down just over 10 percent. To reach the USDA projection, the crush during the last 5 months of the year needs to be only 21 million bushels (3 percent) smaller than that of a year ago. The April domestic crush report will be released on May 26.

Even though the domestic crush has been smaller this year, month-end stocks of soybean oil have been larger (figure 2). The yield of soybean oil per bushel of soybeans crushed has been 4 percent higher than the yield of a year earlier. While soybean oil exports were up 8 percent in the period September 2010 through February 2011, domestic use was down 6 percent. The domestic use of soybean oil for production of biodiesel was down by 53 percent. Consumption began to recover in January 2011 when the blenders’ tax credit was re-instated, but remained small through February. Estimates of use during March will be released on May 5.

Consumption of U.S. soybean oil for all purposes was off nearly 4 percent from September 2010 through February 2011, but was down nearly 8.5 percent in March. The USDA projects that year ending stocks of soybean oil will be a billion pounds smaller than stocks at the beginning of the year. That decline has not yet begun.

Estimates of the domestic crush and consumption of meal and oil through the first 7 months of the marketing year, in conjunction with the harvest of a large South American crop, suggest that the domestic crush for the 2010-11 marketing year may come up short of the USDA projection. Both soybean and soybean oil stocks at the end of the year look to be larger than currently projected. 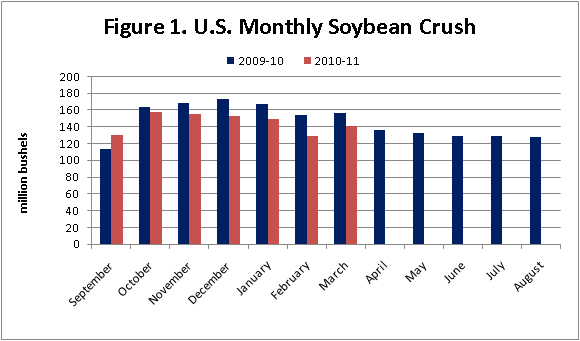 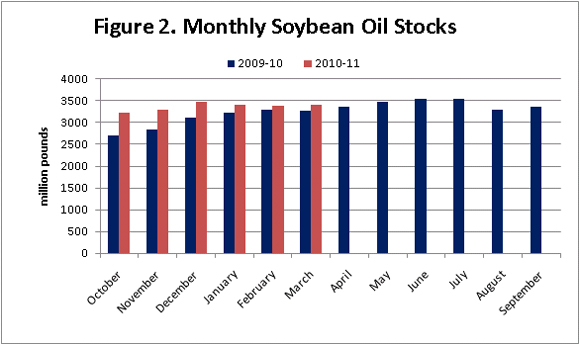