As of May 22, 79 percent of corn has been planted in 18 states that account for 92 percent of corn production in the United States. The 79 percent is near the average from 1980 through 2010. Two areas have low percent plantings: the eastern Corn Belt and the upper Midwest. In these two areas, it is unlikely that other crops such as soybeans will compete for corn acres. However, some farmers may take a prevented planting payment from crop insurance once the final planting date has been reached, thereby reducing the number of corn acres planted in 2011.

The National Agricultural Statistical Service (NASS) prepares Crop Progress reports that give percent of corn acres planted for 18 states that account for 92 percent of corn planted in the United States. In the May 23, 2011 report, 79 percent of the corn acres are reported as being planted in the 18 states for the week ending on May 22. From 1980 through 2010, the average percent planted by this time is 81 percent (see Percent Corn Planted graph below). Hence, the 79 percent for 2011 is near the average for the past 31 years. The near historical average for corn planting suggests that corn acres may not be lost in 2011. However, weather and planting progress over the next two weeks likely will have a large impact on acres planted in 2011. 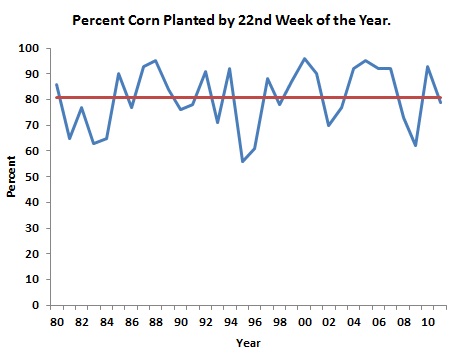 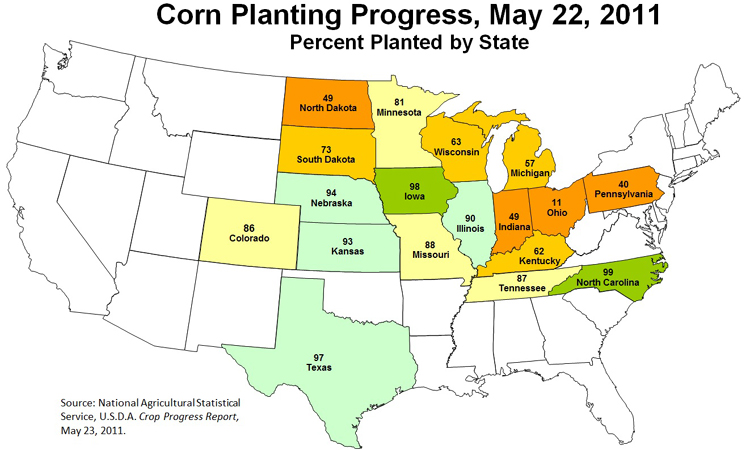 To translate crop progress into acre totals, prospective planting acres contained in the March 2011 Prospective Planting Report by NASS have been multiplied by one minus percent corn planted. This multiplication gives estimates of acres by state that have not been planted yet. There are eight states with over one million acres of corn that have not been planted by May 22nd:

It is unlikely that many of the acres that still have to be planted to corn will be planted to other crops. In the eastern Corn Belt, for example, soybeans could be planted rather than corn. However, current market prices cause returns from corn production to be projected higher than soybean production if planting occurs in May.

Prevented planting will not compete for corn acres until after the final planting data has been reached which varies from May 31st through early June for the Corn Belt and the upper Midwest. A great deal of planting can occur before the final planting date is reached. Therefore, it is quite possible that most acres planed for corn will end up being planted to corn.