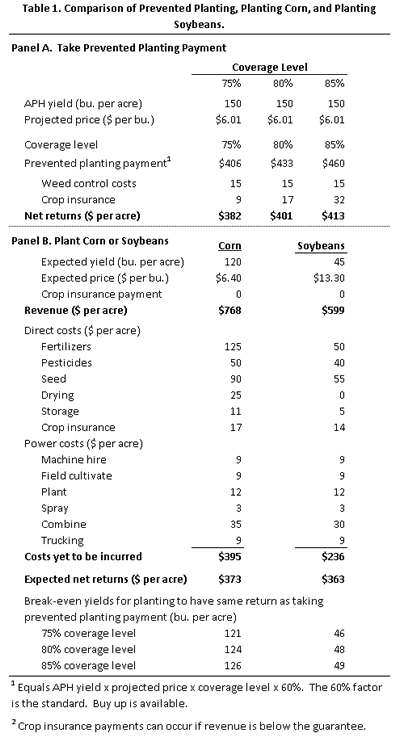 Expected prices represent harvest-time prices. The $6.40 corn price and $13.30 soybean price are near cash bids for harvest delivery in the third week of May. Higher expected prices lead to more of an economic incentive to plant.

Considerations other than net returns

The above prevented planting example assumes that a crop is not planted on prevented planting acres. Farmers can plant a crop after 25 days have passed from the final planting date. More details on these provisions are provided the May 19th FarmdocDaily entry entitled Prevented Planting Provision in Crop Insurance.

What is different this year from previous years?

From this point on, prevented planting acres will be impacted by two factors:

For farmers who have purchased the COMBO product with high coverage levels, taking a prevented planting payment will be a viable alternative compared to planting corn and soybeans. Weather and expected prices will impact the number of prevented planting acres.