The Federal Open Market Committee (FOMC) met this past Tuesday and Wednesday. The statutory dual mandate of the Committee is to foster maximum employment and price stability. From the FOMC statement: “The slower pace of the recovery reflects in part factors that are likely to be temporary, including the damping effect of higher food and energy prices on consumer purchasing power and spending as well as supply chain disruptions associated with the tragic events in Japan.” The Committee decided to keep the target range for the federal funds rate at 0 to ¼ percent and conditions likely warrant low levels for the federal funds rate for an extended period.

Continuing macroeconomic problems in Greece, a depressed U.S. housing market and disappointing May unemployment data raise concerns that economic growth may slow and be weaker than expected. A key question is whether this is a soft patch and just a temporary issue or is the economy actually at a tipping point with a substantial prospect for a double-dip recession as suggested by Yale economist Robert Shiller. 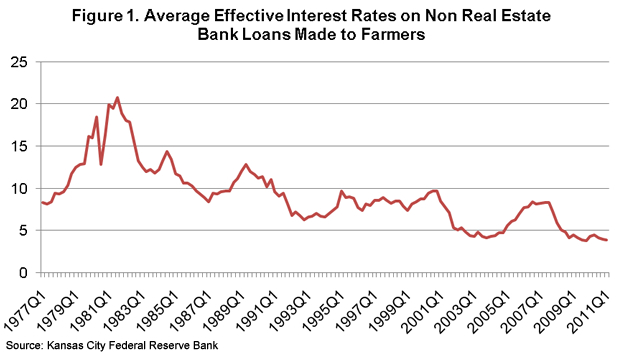 A potential risk for borrowers is that they became more indebted than they otherwise would have under normal interest rate environments. A general rule of thumb is that interest costs on farms should not exceed 20 to 25 percent of gross farm income. Figure 2 shows that interest expense as a proportion of value of farm production (VFP) has decreased in this decade. The median level for Illinois FBFM is less than 3 percent while 75 percent of Illinois FBFM farms are less than 5.1 percent. 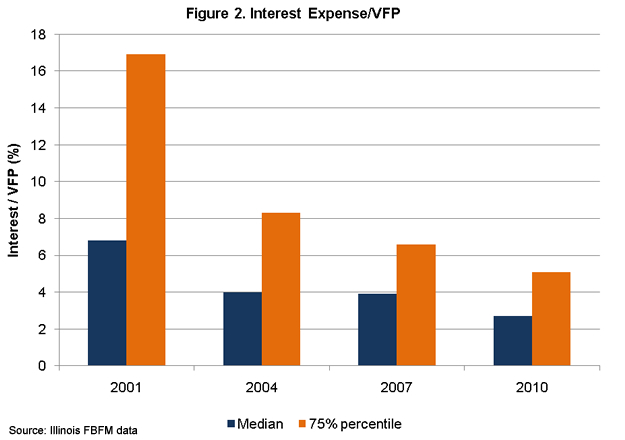 Interest coverage is another measure used to assess the ability of a business to meet debt obligations. The measure is the number of times a farm can make interest payments on its debt with its earnings before interest and taxes. Again, in Figure 3 this measure shows Illinois farms, on average, have exhibited an increased ability to meet debt payments over the past decade. The median measure exceeds 12 in 2010 while only 25 percent of FBFM farms have interest coverage levels below 5.7. 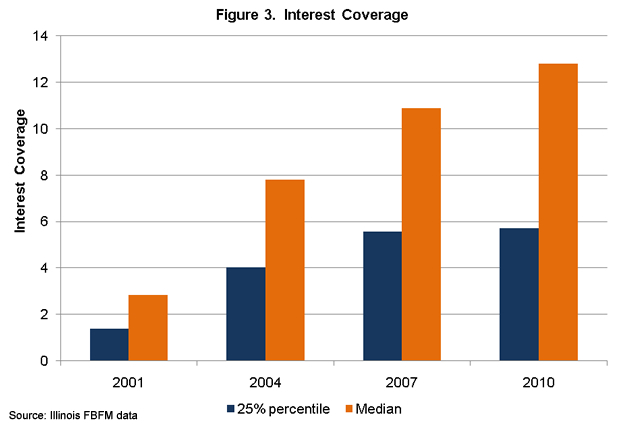