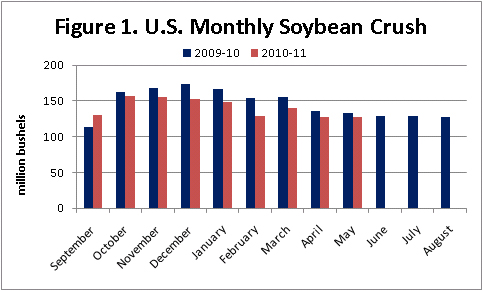 At 11.65 pounds, the apparent soybean oil yield per bushel of soybeans remained high in May, but slightly below the record 11.76 pounds in April. Apparent soybean oil consumption (domestic plus exports) was 86 million pounds (5.5 percent) larger in May than in April. Soybean oil factory and warehouse stocks at the end of May were estimated at 3.174 billion pounds, 168 million less than stocks at the end of April and 294 million pounds less than stocks of a year ago (Figure 2). 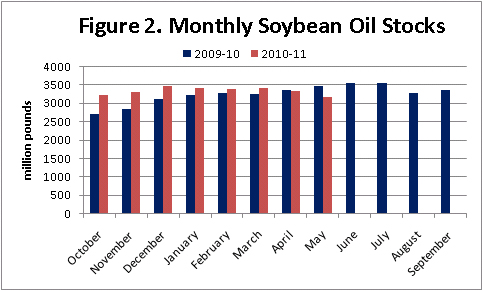 The apparent yield of soybean meal and hull meal per bushel of soybeans also remained high in May, at 48.43 pounds. The calculated yield in April was a record 48.64 pounds. Total disappearance of soybean meal during the month was 173.3 thousand tons (5.8 percent) larger than in April and 195.4 thousand tons larger than in May 2010. Disappearance in both April 2011 and May 2010 were relatively small. Larger use in May was likely in the domestic market, as low prices of soybean meal relative to grain prices likely encouraged some substitution of meal for grains.

The May soybean crush report indicates that soybean oil and meal consumption are progressing a little more rapidly than projected, resulting in a slightly higher rate of soybean crush than expected. The increases are relatively small and do not substantially alter the supply-demand balance for the current marketing year. The USDA’s quarterly Grain Stocks and Acreage reports to be released on June 30 will provide important information for re-assessing those balances for the current and upcoming marketing years.