In its July 7th report, the Agricultural Market Service reports fertilizer contract prices for fall delivery as $814 per ton for anhydrous ammonia, $688 per ton for Diammonium Phosphate (DAP), and $627 per ton for potash. Using these fertilizer prices too calculate 2012 fertilizer costs grown on high productivity farmland results in $162 per acre. The $162 per ton projection is above 2010 and 2011 costs, but below 2009 costs.

The $162 per acre fertilizer cost projection for 2011 is calculated using application rates of 180 pounds per acre of anhydrous ammonia, 170 pounds for DAP, and 85 pounds for potash. These application rates are based on University of Illinois agronomic recommendations, with phosphorus and potassium applied at replacement rates. The expected yield used in calculating nutrient needs is 195 bushels per acre.

If actual costs in 2012 equal projected costs, the $162 per acre costs will be the second highest on record for central Illinois farms with high-productivity farmland (see graph below). Only the 2008 cost of $185 per acre exceeds the 2012 projected costs. The actual fertilizer cost of $124 in 2010 and the projected of $150 per acre for 2011 are below the projected 2012 costs. 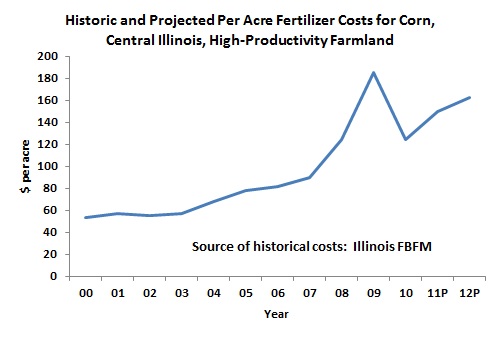 Much of the very high 2009 costs can be attributed to high fertilizer prices during the fall of 2008, the period in which much of fertilizers purchased for 2009 were purchased. From highs in 2008, prices fell steadily resulting in lower costs of $124 per acre in 2010. Fertilizer prices began increasing in 2010, resulting in higher costs in 2011 of $150 per acre. Prices have continued to rise in 2010.