To address the question of the accuracy of August yield forecasts, we examined the size of the August forecast errors for corn and soybeans over the 41-year period from 1970 through 2010. This analysis is a partial update of a much more comprehensive evaluation of corn and soybean forecast errors that we published in 2006. The annual August forecast errors, in percentage terms, are plotted in Figure 1 for corn and Figure 2 for soybeans. The forecast errors are calculated as: (Final Estimate-August Forecast)/ Final Estimate. A positive calculation means the yield was underestimated in August and a negative calculation means the yield was overestimated in August. 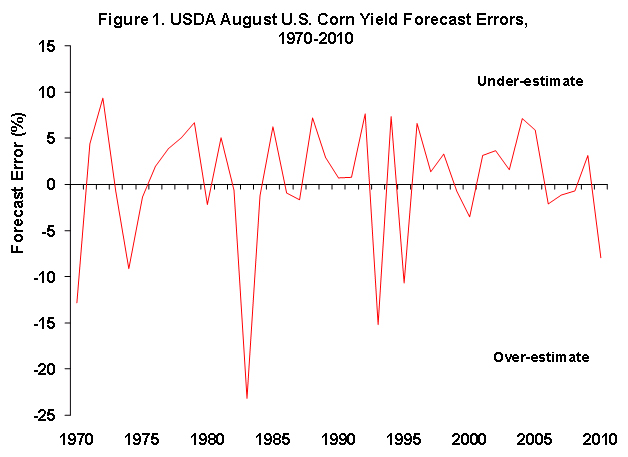 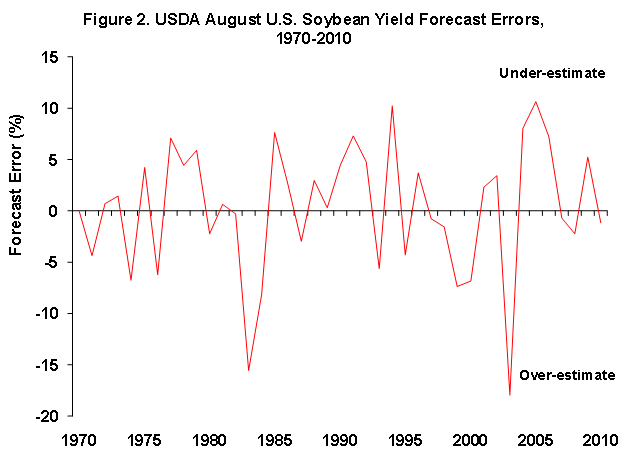 For both corn and soybeans, August forecast errors have varied widely, both in terms of direction and magnitude, and the largest errors have been associated with overestimates of yield. Over half of all errors in both corn and soybeans fall in the range of +/-5%. Visually, forecast errors for corn appear to have been smaller in recent years, while forecast errors for soybeans appear to have been larger, but a trend is not obvious. To provide a more complete assessment of changes over time, the observations are divided into two roughly equal periods: 1970-1989 and 1990-2010. For each period, three calculations are made and presented in Table 1. These calculations include: the largest over-estimate of yield in August in each period, the largest under-estimate of yield in August in each period, and the average absolute error in each period. For corn, both the maximum August yield forecast errors and the average absolute error were smaller in the most recent period. The opposite results were found for soybeans, with both the maximum and average absolute errors being larger in the most recent period.

The analysis of yield forecast accuracy presented here provides mixed conclusions, with August corn yield forecasts being more accurate in the most recent period and soybean yield forecasts being less accurate in the most recent period. Measured in terms of average absolute error, the difference in soybean forecast error accuracy for the two periods is not large. Overall, the evidence is not consistent with the charge that USDA corn and soybean yield estimates in August are becoming substantially less accurate.