The discovery period for determining projected prices and volatiles for wheat has ended and the Risk Management Agency (RMA) has released these factors. In Illinois and many other Midwestern states, the 2012 projected price for wheat is $8.20 per bushel. The volatility is .27.

The 2012 volatility of .27 is below the 2011 volatility of .32. Volatilities are an important factor determining crop insurance premium. All else being equal, the lower .27 volatility will lower premium for 2012. 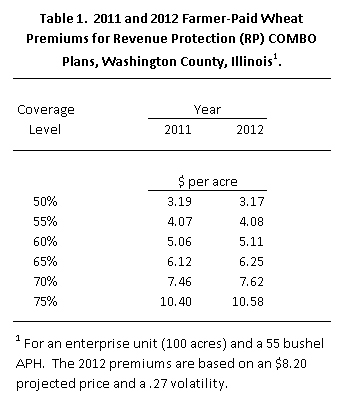 Nearly identical premiums for RP suggest that farmers may find wheat insurance more cost effective in 2012 relative to 2011. For roughly the same premium in 2012, a farmer will on average receive a 14 percent higher premium.

While more cost effective, one of the reasons for purchasing crop insurance comes to an end in 2012. The Supplement Revenue Assistance Payments Program, more commonly called SURE, was authorized in the 2012 Farm Bill for the 2008 through 2011 crop years. This program required all acres to be insured before payments are received. Since SURE is not authorized for 2012, the incentive to purchase crop insurance offered by SURE ends. Still, however, there may be an incentive to purchase crop insurance to take part in Federal ad hoc disaster programs. Ad hoc disaster programs have been legislated in the past. These ad hoc programs typically make higher payments to purchasers of crop insurance.