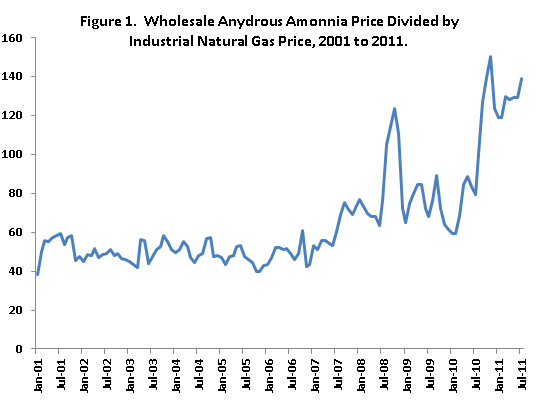 The ammonia-to-gas price ratio was relatively stable from January 2001 through December 2006, with a ratio average of 49. This 49 ratio indicated that the anhydrous ammonia price per ton was 49 times the per thousand cubic feet price of natural gas. Since the end of 2006, the ratio has been higher and much more variable. The ratio averaged 61 in 2007, 85 in 2008, 74 in 2009, and 97 in 2010. So far in 2011, the ratio has averaged 128. These higher ratios indicate that anhydrous ammonia prices have increased relative to natural gas prices.

The increase in the ammonia-to-gas ratio occurred roughly at the same time as when commodity prices increased. Between 1975 through 2096, Illinois corn prices average $2.40 per bushel. Since 2006, corn prices have average $4.26 per bushel. The increase in corn prices correspond to an increase in crop production around the world, leading to more demand for fertilizers. Hence, increases in demand may partially explain the ratio increase.

Also note that the ratio has been “spiky” since 2007 (see Figure 1). The ratio reached a high in October 2008 of 123. This high was followed by a decline, corresponding to declines in prices of many assets as the financial crisis became evident in 2008. The ratio has been high again since late 2010 through the first half of 2011, averaging close to 130.

Both of the spikes have been associated with high corn prices. These high corn prices could signal shifts in crop production that could change the demand for nitrogen fertilizers. It could also signal profit taking on the part of manufacturing of fertilizers.

In any case, ammonia-to-gas price relationships have become much more variable since 2007. This suggests that ammonia price variability is not being caused by natural gas prices, but is more likely due to demand factors.