Senators Brown, Thune, Durbin, and Lugar recently released a Farm Bill proposal entitled the Aggregate Risk and Revenue Management (ARRM) program. If enacted, the ARRM program would replace Direct Payments, Counter-cyclical, Marketing Loan, Average Crop Revenue Election (ACRE), and Supplemental Revenue Assistance Payments (SURE) programs with ARRM. ARRM is a revenue program designed to make payments in years of low revenue. In this article, simulated payments from ARRM from 1995 through 2010 are compared to actual commodity program payments that occurred during that period.

Figure 1 shows simulated ARRM payments and actual commodity program commodity payments stated on a per acre base. Payments are for an example farm in McLean County, Illinois that currently devotes two-thirds of its acres to corn and one-third to soybeans. ARRM payments are averaged over corn and soybean production. Actual commodity payments come from a variety of programs including Production Flexibility Contract payments, Agricultural Marketing Transition Assistance payments, Marketing Loss Assistance payments, Counter-cyclical payments, Marketing Loan and Deficiency payments, Direct Payments, and ACRE payments. Some of the programs for which payments are shown in Figure 1 no longer exist. 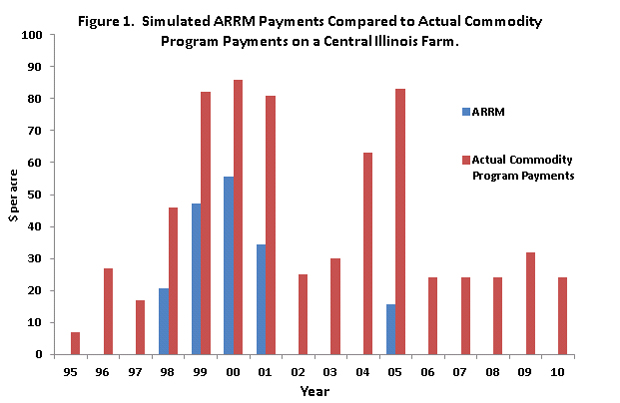 Simulated ARRM payments are less than actual commodity program payments. Over the 1995 through 2010 period, actual commodity payments average $42 per acre while simulated ARRM payments are $11 per acre, 75 percent less than actual commodity program payments. These declines are significant and are larger than may be gained from the perspective of Congressional Budget Office baselines. CBO estimates indicate that ARRM would save $20 billion over ten years from total outlays for current commodity programs of about 60 billion, yielding a reduction of 33 percent. This difference between the two is due to two reasons. First, some of the payments in Figure 1 come from programs that no longer exist. Second, programs such as Counter-cyclical and Marketing Loan programs that made large payments historically are not projected to make large payments in the future because of a significantly different price environment. 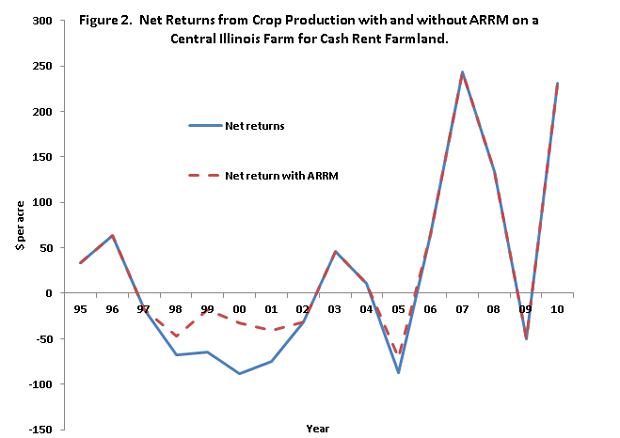 Note, however, that ARRM payment would not have brought net returns into positive levels. The period 1998 through 2001 was one of relatively low prices, leading to a period of low incomes, with commodity program payments constituting much of net farm income. According to Farm Business Farm Management (FBFM) summaries, net farm incomes averaged across Illinois grain farms were $18,176 in 1998, $35,353 in 1999, $53,450 in 2000, and $31,982 in 2001. Had commodity program payments not existed average net incomes would have been below $0. Commodity programs payments reduced financial stress that would have occurred during this period.

Budgeting pressures are leading to a commodity program that will make smaller payments to farmers. This is occurring at the same time as gross revenues, costs, and revenue variability on farms have increased. Simply put, the size of ARRM payments will be relatively smaller to cost and revenue levels in the future compared to commodity program payments in the past. Future declines in prices could lead to much larger losses than in the past. This suggests that financial stress reductions from ARRM may be less in the future than reductions occurring from commodity programs in previous years.