In the October 4th post, Gary Schnitkey pointed out the difference in the intra-year price risk protection offered by crop revenue insurance programs and risk that may persist over multiple crop years due to price declines relative to historical averages. In the figure from that post, Schnitkey highlighted two eras – the mid-80s and 1998-2002 – as two periods where insurance price guarantees (base prices) would have been below the 5-year average price level. This indicates periods of potential financial stress where crop revenue insurance coverage might have been considered inadequate.

Today, I take another look at this issue by comparing the timing and magnitude of insurance period price changes for corn to price changes in the marketing year average (MYA) corn price relative to historical levels. Specifically, I compare the deviations of the final harvest price from the base/guarantee price for crop revenue insurance to deviations of the actual MYA price from the 2-year rolling average. The latter provides a measure of the price protection offered through the ACRE program.

Figure 1 below plots the price deviations for each of these cases. The blue series labeled ‘Insurance’ reports the percentage change in the price for crop insurance (deviation of average November settlement from the average February settlement for the December contract). The red series labeled ‘MYA 2-yr’ reports the percent deviation from the MYA price for that year from the average of MYA price for the previous 2 years. Negative values in figure 1 imply that actual price levels fell below the guarantee or base price to which they are being compared. For the insurance series, price declines in excess of 15% would begin to trigger insurance indemnities at higher coverage levels, while price declines in excess of 10% could potentially trigger losses due to price declines for the ACRE program. 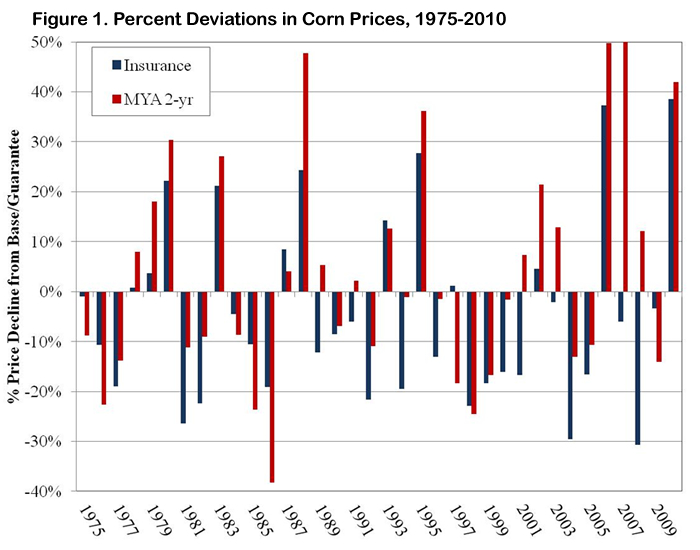 There are a number of periods in figure 1 which illustrate the difference between price protection within a crop year (insurance) relative to multiple crop years (ACRE). From 1984-1986, the losses triggered by insurance products would have been significantly smaller than those from an ACRE style program. Thus, while insurance base prices would have been below average price levels during that period, the magnitude of the protection provided by insurance programs would have also been relatively low. Insurance program losses driven by prices would have also been relatively low for the 1975-1976 and 1997-1998 crop years.

In contrast, price-driven losses for insurance would have exceeded those from an ACRE style program from 1999-2001. This would have also occurred for the 1977 and 1981-1982 crop years. Of particular interest are the more recent crop years since 2004 when large price-driven losses have occurred for revenue insurance programs while, with the exception of 2009, the MYA price has generally been on an upward trend and above its historical average. Furthermore, while two price deviations compared in figure 1 are generally similar, there are some notable exceptions, such as 1994 and 2008, where revenue insurance could have triggered losses while an ACRE style program would not have triggered losses as a result of price declines.

While the amount of overlap or inefficiency in agricultural programs is often criticized, this illustrates the differences in coverage between crop revenue insurance and the ACRE revenue program. Despite their similarities in terms of offering revenue protection, there is a fairly significant disparity in the form of that protection based on the price guarantees and timing of price risk protection provided by the two programs. While efficiency gains could be achieved by integrating the programs, there should be a clear objective for the type of price risk protection that should be offered to crop producers along with an understanding of what existing programs offer before significant changes to either should be made.