Table 1 shows corn yields, stated as a percentage of the Actual Production History (APH), below which insurance payments will occur under each of the three plans within the COMBO product. Under Yield Protection (YP) at an 85 percent coverage level, payments will occur when yield is below 85 percent of the APH yield (see Table 1).

RP with Exclusion (RPwExl) does not use the higher of projected or harvest price in its guarantee. As a result higher yield losses are required when the harvest price is above the projected price. At an 85 percent coverage level, RPwExl requires yields to be less than 81 percent of the APH yield, compared to 85 percent for YP and RP. 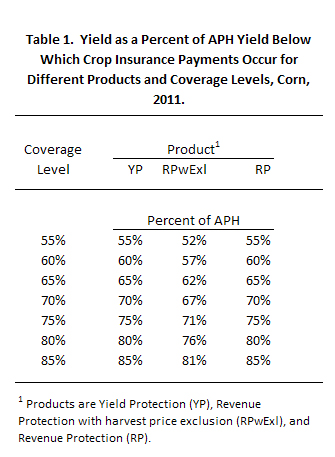 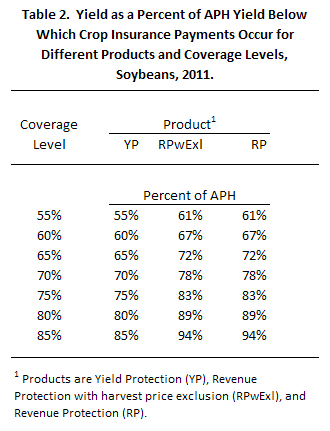 Projected Crop Reporting District (CRD) yields for 2011 give indications of where farms are more likely to receive insurance payments. The 2011 projected yield is taken as a percent of the ten-year average to show the current year’s yield relative to historic yields. A lower percent indicate the more crop insurance payments likely will occur in that CRD. 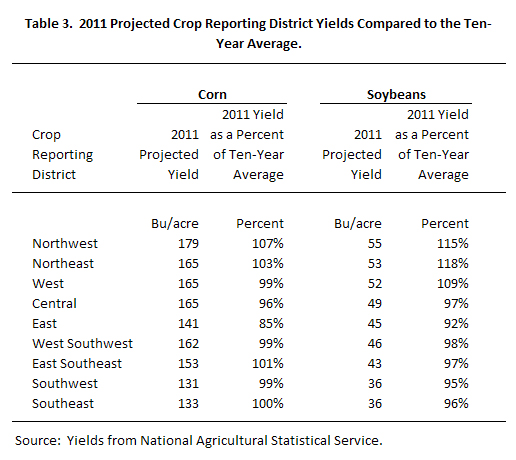 For soybeans, the northern Illinois had yields significantly above the ten-year average: Northwest (115%), Northeast (118%), and West (109%). The Central and Southern portions of the state have 2011 yields relative to the ten-year average in the 90 percent range. The East CRD had the lowest relative yield of 92 percent (Table 3). The 92 percent is close to the trigger level for insurance payments (see Table 2). Again, insurance payments for soybeans are more likely for farms in the East CRD compared to CRDs with higher relative yields.

This post shows yields stated as a percent of APH yield below which insurance payments will be made in 2011 for corn and soybeans. The East CRD has the lowest relative yields. Insurance payments are most likely in this CRD.