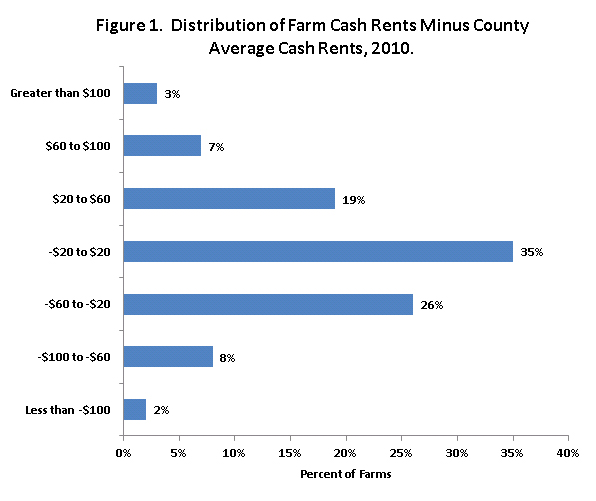 Overall, the average of cash rents from FBFM data are close to the averages from NASS. Over the entire state, FBFM rents average within $2 per acre of the NASS average county rents. This suggests that NASS data provides good indications of average county cash rents.

While NASS averages are accurate, average county rents mask the variability in rents within a county. Only 35 percent of farm cash rents are within $20 of the average rent. This leaves many cash rents that vary significantly from averages.

Furthermore, average cash rents from FBFM used in Figure 1 likely understate variability. Data used in constructing rents are average for a farm. Many farms have rented land from more than one landlord. Hence, a farm likely has some rents that are above the average and other rents that are below the average.

There are cash rents significantly above the average. For example, there are three percent of the farm rents that are $100 higher than the average county cash rent. In 2011, the average county cash rent in McLean County is $233 per acre (see FEFO 11-16). This would imply that that three percent of farm rents are above $333 per acre ($233 average plus $100). These above-average cash rents generally receive a great deal of public attention.

The distribution of cash rents points out difficulty in relying on average to cash rents. It also suggests that “high” cash rents should be taken as a limited indication of all rents within the rental market.