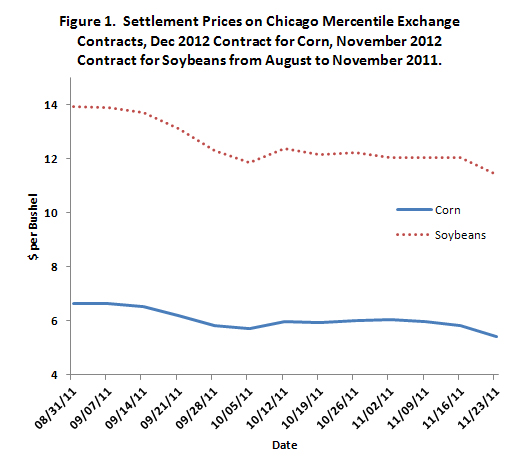 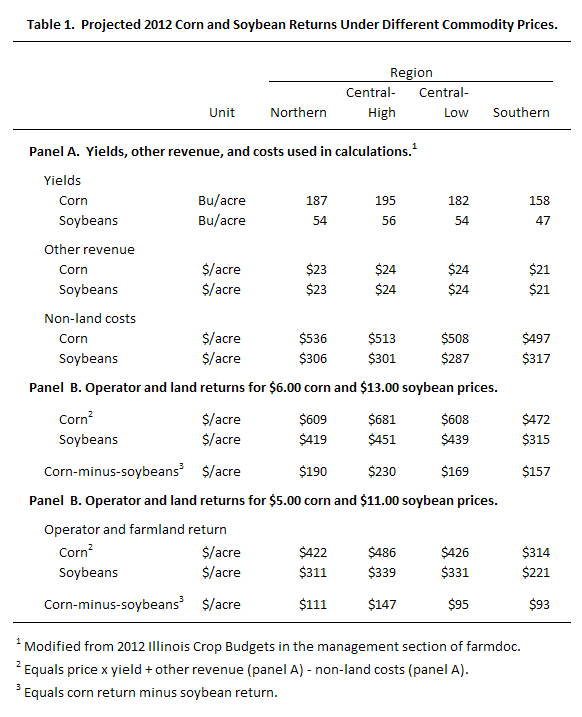 At September projected prices ($6.00 corn and $13.00 soybeans), the operator and farmland return for corn is projected at $608 per acre in the Central-Low region (Panel B of Table 1). For November price ($5.00 corn and $11 for soybeans), operator and farmland returns are lower and are at $426 per acre (see Panel C of Table 1). From September to November, corn returns have fallen by $182 per acre. Soybean returns are lowered by $108 per acre from $439 per acre using September prices to $339 per acre using November prices. Overall, changes in projected prices reduce returns $182 per acre for corn and $108 per acres for soybean. Given a corn-soybean rotation that is split 50 percent between each crop, returns have declined an average of $145 per acre.

While price declines have reduced expected returns, November prices still result in returns above historical averages. For a 50-50 corn and soybean rotation, the average operator and farmland return in 2012 is projected at $379 per acre (average of $426 for corn and $331 for soybeans). From 2000 to 2010, the average operator and farmland return for a 50-50 rotation has averaged $230 per acre. Except for farms with high cash rents, November prices still suggest a profitable year.

In summary, futures price changes between September and November suggest:

Commodity prices obviously are volatile. It is likely that futures prices will change over the next several months, resulting in changed implications from those given above. Perhaps the most critical time period will be during the month of February, when futures prices are used to set projected prices for crop insurance. Once these crop insurance prices are known, much more will be known about the downside risk farmers face for the 2012 crop.