The small corn crop in 2011 should result in small inventories by the end of the marketing year. Large grain crops in the rest of the world will keep export demand weak. The expiration of the ethanol benders’ tax credit and declining broiler and cattle numbers point to stagnant domestic consumption in the first half of 2012. Southern hemisphere corn production is expected to increase in 2012, but hot, dry conditions are currently being experienced in Argentina. U.S. farmers may increase corn acreage and a higher yield in 2012 would result in more abundant supplies, but uncertainty will persist through the summer. Prices are expected to remain in the mid-$5 to low-$6 range in early 2012. Prices later in the year will reflect crop prospects and world financial conditions.

A small U.S. soybean crop in 2011 has been met with weaker demand. A large South American harvest in 2011 and expectations for another large crop in 2012 has resulted in weaker export demand for U.S. soybeans, meal, and oil. Chinese purchases started more slowly than in the previous year. Year ending stocks of U.S. soybeans will be relatively small, but adequate. U.S. soybean acreage in 2012 will need to be maintained near the level of 2011. Supply uncertainty will persist through the summer of 2012, suggesting that prices will be maintained in a wide range around $11.

Total U.S. wheat production declined sharply in 2011, but SRW production was nearly double the small crop of 2010. Production of wheat in the rest of the world was up sharply, leading to declining export demand for U.S. wheat and prospects for adequate year ending stocks. Most of the 2011 wheat crop in Illinois has been sold, at an average price near $6.60. The focus early in 2012 will be on U.S. winter wheat seedings, the status of drought conditions in the HRW areas, and prospects for the Australian crop. A more modest northern hemisphere wheat crop in 2012 and a lingering drought in the U.S. southwest would be supportive for prices late in 2012. Prices in the first half of the year may remain in the mid-$5 to mid-$6 range. 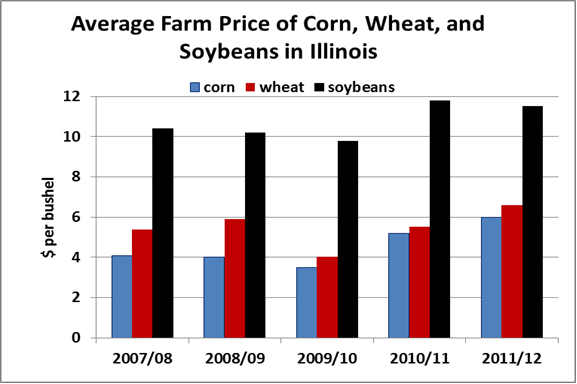 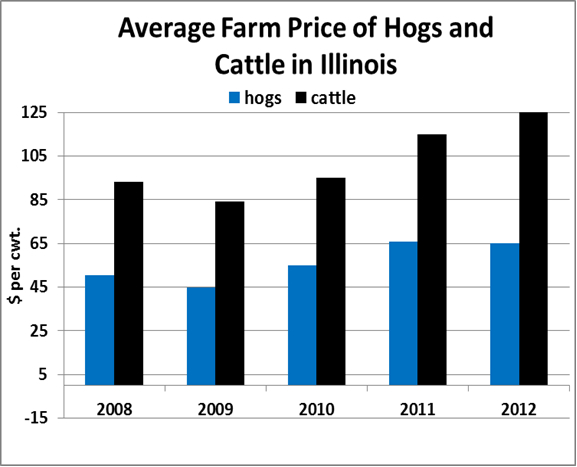