In many areas of central Illinois, corn-after-corn yields were substantially below corn-after-soybean yields in 2010 and 2011. These yield drags, along with large increases in corn costs, have led some farmers to reevaluate corn-soybean cropping decisions. For land productivities that predominate in Illinois, corn-after-corn and continuous corn usually have higher budgeted returns than soybeans. However, more intense corn rotations reduce corn-after-soybeans acres, often some of the most profitable acres on a farm. Reduction in corn-after-soybean acres will impact returns in future years. This article examines the longer-run return impacts of corn-soybean rotations. 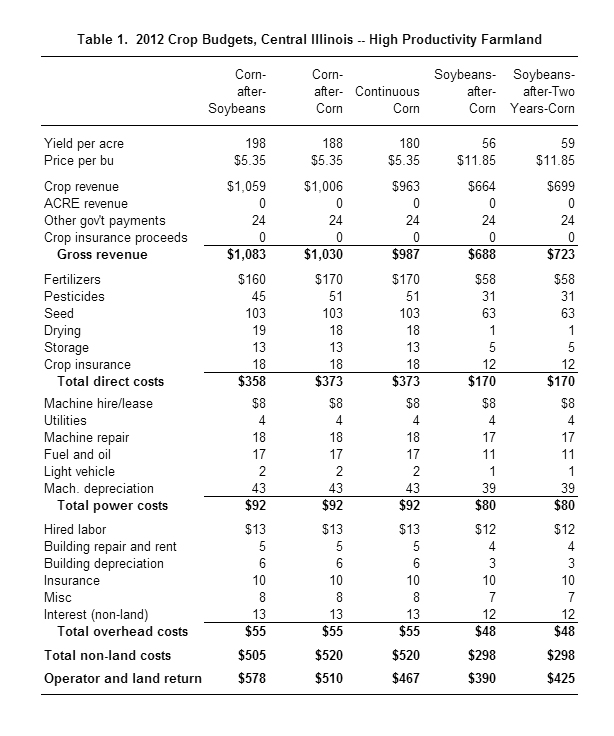 Yields differ for the different budgets. Corn-after-soybean yield is 198 bushels. Compared to corn-after-soybeans, corn-after-corn is 10 bushels less at 188 bushels per acre and continuous corn is 18 bushels less at 180 bushels per acre. Soybeans-after-corn has a 56 bushel per acre yield. Soybeans-after-two-years of corn have 3 bushels higher yield at 59 bushels per acre. Differences in yields in these budgets reflect research conducted at the University of Illinois. Emerson Nafziger reported some of the corn yield research in a 2012 Corn & Soybean Classic Proceedings entitled “Fixing What Ails Continuous Corn” (Department of Crop Sciences, University of Illinois).

Operator and land returns are:

Note that all corn budgets have higher returns than soybean budgets. For the coming year, budgets suggest that returns are maximized by planting all corn.

For these three rotations, rotation returns are:

Third year: In the third year, all land will be in continuous corn having a return and have a projected return of $467 per acre. The $467 per acre return is below the $504 return for corn-corn-soybeans.

The yearly tradeoffs then of moving from corn-corn-soybeans to continuous corn are:

Since there returns vary over time, this is a present value problem. Under current realistic discount factors, present value calculations suggest corn-corn-soybeans is the most profitable rotation over time.

First-year: In the first year, 2/3 of the acres will be continuous corn and 1/3 will be soybeans-after-two-years-corn. This combination will have a return of $453 per acre, which is $14 less than continuous corn.

The yearly sequence of difference in returns is:

Again this is a present value problem, with most discount factors indicating that the switch to corn-corn-soybeans has the higher return.

Key to the above calculations are the assumptions concerning yield drags for corn-after-corn and continuous corn. Lower yield drags will cause the profitability of more intense rotations to increase.

Reliance on more tillage to continue with corn heavy rotations will reduce the return advantages or more intensive corn rotations.

Budget above use projected 2012 commodity prices ($5.35 per bushel for corn and $11.85 for soybean). These prices likely are higher than what prices will average over the next five-years. Estimates of these long-run prices are $4.50 for corn $10.50 for soybeans. At these prices, rotation returns become:

Actual costs vary across farms. Hence, each farm should use their own projected costs in rotation considerations.

It has been noted that cash rent arrangements that are short-term may encourage more corn production. If a farmer believes that they will only be able to rent a farm for one year, there is an incentive to plant all corn so as to maximize profits in one year.