During the last several months, world economic growth has emerged as an issue. To provide context, this article identifies the 10 countries with the largest economy as measured by gross domestic product (GDP) as well as the 10 countries that have contributed the most to world economic growth since the onset of the 2007 financial crisis. In addition, information is provided on the Euro area because of the attention currently being focused on it. The Euro area is composed of 17 countries that use the Euro as their currency. These 17 countries are Austria, Belgium, Cyprus, Estonia, Finland, France, Germany, Greece, Ireland, Italy, Luxembourg, Malta, Netherlands, Portugal, Slovak Republic, Slovenia, and Spain.

Data used in this paper are from the International Monetary Fund accessed during January 2012 at http://www.imf.org/external/data.htm#data. Because of the economic turmoil during the last part of 2011 and the resulting potential for estimates of 2011 GDP to change notably, 2010 was used as the latest year Each country’s GDP is measured in current (non-deflated) U.S. dollars. Despite being a commonly-used measured, using current U.S. dollars introduces potential measurement problems. In particular, a country’s GDP measured in current dollars means that growth could be the result of inflation and/or changes in the value of a nation’s currency relative to the U.S. dollar. Therefore, economists often use GDP valued at purchasing power parity (PPP). PPP is a condition between countries where an amount of money has the same purchasing power in the different countries. The PPP adjustment to GDP is subject to debate but does provide a second perspective on economic activity that is often considered to be a more accurate, though not perfect, perspective.

The U.S., the world’s largest economy, accounted for 23% of world economic output in 2010 measured in current U.S. dollars (see Table 1). Its share is smaller when using the PPP adjustment of GDP, 19.5% (see Table 2). China is the second largest country in both measures but is notably closer to the U.S. when using the PPP adjustment. The Euro area is larger than China, but the difference is small for PPP adjusted GDP. For both measures of GDP, the majority of countries ranked in the top 10 are usually classified as developed countries. 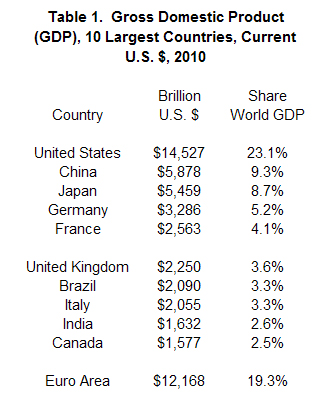 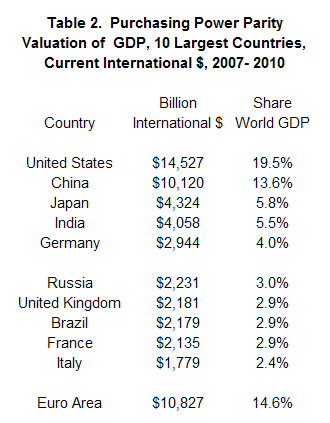 In terms of economic growth from 2007 through 2010, China is the world’s largest economy using both measures (see Tables 3 and 4). China accounted for at least one-third of world growth. The U.S. ranks third or fourth. Thus, China, not the U.S., is the world’s largest economy in terms of contribution to world economic growth. Additional observations on these two tables include: 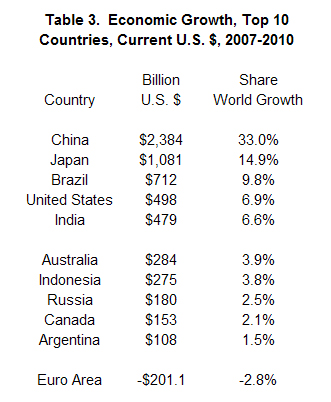 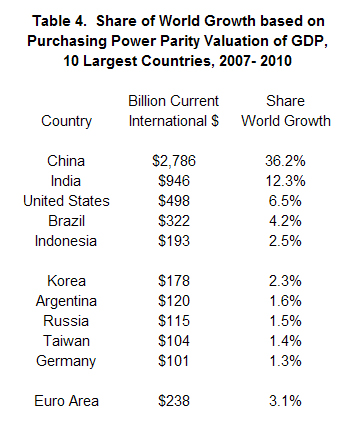 Economic importance can be measured either in terms of the overall level of a variable or in terms of a variable’s contribution to change. Both measures are relevant and appropriate depending on the question. When the question is economic growth, China, not the U.S. or the Euro area, is the world’s largest economy. This observation does not mean the U.S. and Euro area do not matter. They do for many reasons, including international trade with China and other developing countries. But, the evidence since 2007 suggests that world economic growth over the next few years likely will depend importantly on China in particular and the developing world more generally.