This a reprint of a theme overview from the current issue of ‘Choices’ Magazine.

In 2009, crop farmers in Iowa and other states faced the decision of whether to continue with the existing Direct and Counter-cyclical Program (DCP) offered by the Farm Service Agency (FSA) of the United States Department of Agriculture (USDA) or to enroll in a new program called Average Crop Revenue Election (ACRE). The counter-cyclical payments and marketing loans–or loan deficiency payments–available under DCP helped mitigate commodity price risk, while ACRE offered producers a chance to protect against falling crop revenue. However, producers were required to give up some of the benefits of the old program, including a 20% reduction in the direct payments, a 30% reduction in marketing loan rates, and 100% of counter-cyclical payments if they enrolled in ACRE. Prices for the two primary crops grown in Iowa, corn and soybeans, were at high enough levels that counter-cyclical payments and loan deficiency payments were unlikely to be available, so producers had to choose between retaining a small, but certain, cash benefit–80% of the direct payments–each year, and possibly receiving a larger revenue deficiency payment if certain unfavorable combinations of prices and yields occurred in one or more of the next four crop years.

To many university economists in the Corn Belt the choice seemed clear–the reduced direct payment was a small price to pay for establishing a new safety net at a much higher level than DCP offered. The tepid response from farmers was puzzling. In March 2010, a mail survey was sent to 3,384 Iowa farmers to find out what factors most influenced their choice to enroll in ACRE or not, and to determine if any characteristics of their farming operations were significantly related to their decisions.

Recipients were randomly selected from all Iowa producers who were enrolled in FSA commodity payment programs in 2008. The enrollment decision on whether to go with ACRE or DCP was made separately for each FSA defined farm unit. Generally, each farm unit is associated with a different owner or operating entity. Names on the FSA list were sorted by the county in which the farm units were registered, so the sample was proportional to the geographic distribution of farms across the state. Usable replies were received from 356 producers, a response rate of just over 10%.

The producers who responded to the survey were operating an average of 5.0 FSA farm units each, but the range was from one unit to 57 units. A large majority (72%) of the respondents reported that they enrolled none of the farm units either owned or rented that they operated in 2009 in ACRE. Overall, respondents enrolled 20% of their FSA farm units in ACRE, whereas FSA reported that only 12% of the units in Iowa were enrolled. Apparently farmers who enrolled some units in ACRE were more likely to return the questionnaire than those who did not. Only 13% of the respondents enrolled all their farm units, while 15% enrolled just some of their farm units in ACRE. They were more likely to enroll farms that they owned themselves–25% of the owned units were enrolled–than farms they were renting from another owner–16% of the rented units were enrolled.

Respondents were asked to indicate their sources of information about ACRE and rank the importance of each one to their enrollment decisions on a scale of one to five. Not surprisingly, FSA newsletters and FSA personnel were the most common information source, mentioned by 87% of the respondents. The next most common source cited was the farm press, followed by Extension websites and articles, advice from lenders, farm managers or friends, and Extension meetings. The average ranking of the importance of each information source by farmers who enrolled all or some of their farm units in ACRE was compared to the corresponding ranking by farmers who enrolled none of their farms. Farmers who enrolled at least some farms ranked Extension presentations as significantly more important than those who enrolled no farms, indicating that Extension specialists may have had a positive influence on the enrollment decision.

Fifty percent of the respondents who enrolled at least some farms in ACRE used an electronic spreadsheet to analyze their decision, versus only 16% of those who enrolled no farms. Likewise, farmers who used an electronic spreadsheet program enrolled an average of 38% of their farm units, compared to a 16% enrollment rate for those who did not. This indicates that a quantitative analysis of the ACRE decision tended to influence operators to enroll. The most common sources of the spreadsheets used were those developed by Extension and FSA. 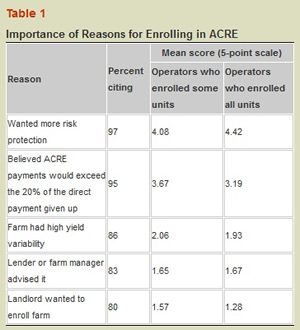 Respondents who enrolled one or more farm units in ACRE were asked to rate the importance of their reasons for doing so. The percentage of the respondents who cited each reason and the average score given to it are summarized in Table 1. Two reasons stood out from the rest: a desire for more risk protection against possible decreases in revenue, and a belief that the payments received under ACRE would exceed the value of the FSA direct payments given up over the four years of enrollment. High yield variability, advice from a farm lender or manager, and encouragement from a landlord were also cited by at least 80% of the respondents as reasons for enrolling; however they were ranked as less important. 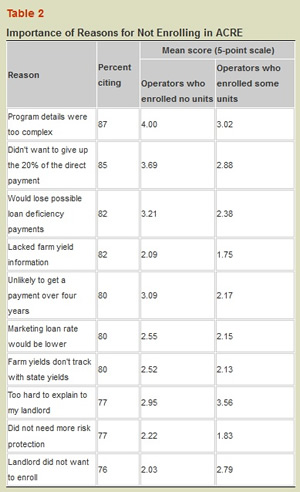 Reasons for Not Enrolling

On the other side of the coin, respondents who enrolled none or only part of their farms in ACRE were asked to rate the importance of various reasons for not enrolling (Table 2). The factor that was most cited and clearly given the most importance was that the details of the program were too complex. The second most important reason for not enrolling was to avoid giving up 20% of the FSA Direct Payment. Several other reasons were cited by at least 75% of the respondents, but were given less importance. Interestingly, a lack of farm level yield information was the fourth most cited negative reason, but was rated the least important.

Some information was gathered about both the characteristics of the farmers who answered the survey and some of the risk management tools that they were using. The farm operators who enrolled all or some of their FSA farm units–those who were at least somewhat favorable toward ACRE–operated more FSA units, farmed significantly more crop acres, and derived a higher percent of their gross farm income from the production of crops than those who enrolled no farm units. Presumably they had more dollars at risk if prices or yields decreased substantially. They also insured a higher percentage of their crop acres, and chose a higher level of crop insurance coverage. Likewise, they priced a higher percentage of their crop prior to harvest than the group that did not enroll in ACRE, either with forward contracts or through the futures market. The average farm debt-to-asset level and average age of the two groups of operators did not differ significantly. The survey results showed that Iowa farmers who were making more use of other common crop risk management tools were also more likely to participate in the ACRE program.

Respondents were given the chance to make suggestions about how ACRE could better serve the needs of crop producers. About one-fourth of them included a comment, and half of the comments said to make the program simpler. Another 18% recommended discontinuing the ACRE program altogether or scrapping all government farm programs.

Programs for mitigating financial risk for crop farmers will be an important part of the next farm bill debate. The ACRE program will likely be modified or replaced with a new revenue safety net. The results of this survey show that in order to attract a high level of participation in ACRE or its successor, the mechanics of the program need to be simple and transparent, and it should offer an expected benefit that clearly exceeds the value of any payments foregone. Program benefits need to be well articulated to landowners as well as tenants. Iowa producers who received information from Extension programs and utilized electronic spreadsheet decision tools were more likely to enroll in ACRE, implying that providing adequate resources for educational programs about new commodity programs may be important to facilitate a well-reasoned enrollment decision.

© 1999-2011 Choices. All rights reserved. Articles may be reproduced or electronically distributed as long as attribution to Choices and the Agricultural & Applied Economics Association is maintained.