In 2011, most corn and soybean acres in Illinois were insured using Revenue Protection (RP) at a 75% or higher coverage level. At these coverage levels, most acres where insured using enterprise units. For those choosing RP at a 75% or higher coverage level with enterprise units last year, a similar choice in 2012 seems prudent given that the Trend-Adjusted Actual Production History (TA-APH) yield endorsement is added to the RP policy. Some consideration to RP with the harvest price exclusion (RPwExcl) may be warranted. Group Risk Income Plan (GRIP) users may wish to re-evaluate choices as GRIP premiums have gone up will RP premiums have come down. GRIP still has attractive features, but relative costs have changed. 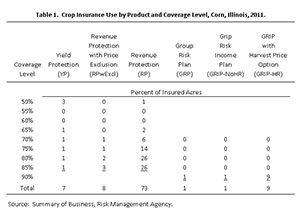 In 2011, 10,171 million acres of corn were insured using multi-peril crop insurance policies in Illinois, The insured acres of10,181 million represents 81 percent of all planted acres in 2011.

Insurance Use on Soybeans in 2011 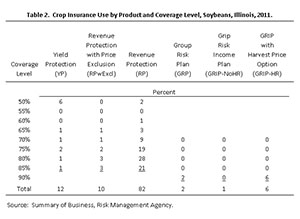 The predominate insurance use in either corn or soybeans last year was RP at a 75% or higher coverage level insured using enterprise units. If this was the choice last year, it will likely be a good choice for the coming year. Two considerations:

Should Enterprise Units be Taken?

Is GRIP-HR Still a Good Alternative?

GRIP-HR use has declined over time, primarily because GRIP premiums have increased while premiums for plans with the COMBO product have declined. GRIP still has useful features, including that payments over time will exceed premiums. However, premium changes may cause a person to consider switching to RP.