I have been asked whether Revenue Protection with the Harvest Price Exclusion (RPwExcl) should be considered as an alternative to Revenue Protection (RP). Unlike RP, RPwExcl does not allow its guarantee to increase if harvest price is above projected price. If RPwExcl is used, I suggest considering a coverage level 5 percent higher than the RP product. These two products have roughly the same premiums. However, payments will vary between the two alternatives. RPwExcl will provide more price protection while RP will provide more yield protection. 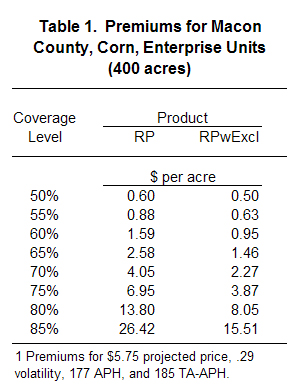 Tradeoffs are illustrated for a Macon County farm having a Trend Adjusted Actual Production History (TA-APH) yield of 185 bushels. The projected price used in the illustration is $5.75, close to the average for the first two weeks of February 2012. The illustration assumes that RPwExcl will be purchased at an 85% coverage level. The RPwExcl-85% guarantee is equal to $904 per acre (185 bushel TA-APH yield x higher of $5.75 projected price x 85% coverage level).RPwExcl-85% will be compared to an RP-80%. RP-80% product has a guarantee equal to:

There is a block around the difference associates with a 130 bushel actual yield and a $7.50 harvest price. This combination simulates 1988 conditions given that they occur in 2012. In 1988, yields in Macon County would have averaged 31 percent below the TA-APH yield while harvest price was 33 percent higher than the projected price. The 31% reduction in yield was applied to arrive at the 130 bushel actual yield and the 33 percent increase was applied to arrive at the $7.50 harvest price. This scenario is meant to simulate one of the worst yielding years, thereby providing an estimate of how large the differences can be between RPwExcl-85% and RP-80%.

RP is designed for farmers who hedge production during the pre-harvest period. If a farmer is aggressive with hedging – hedging something over 40 percent of production in spring – use of RP likely will be preferred, as RPs payments increase in period of low yields and high prices which will partially offset losses occurring from hedging.

The farmdoc Crop Insurance section is available at: http://www.farmdoc.illinois.edu/cropins/index.asp