A key issue framing debate on the 2012 Farm Bill is whether farm supports should be market oriented or fixed by Congress. The issue is most clearly seen in the debate over target prices fixed by Congress vs. a shallow loss program, such as ACRE, with assistance levels tied to market revenue. Similar debates have occurred throughout the history of U.S. farm policy. This article first reviews these historical debates, often referred to at the time as a debate over flexible vs. fixed farm supports. An explanation is then proposed for why the U.S. has consistently chosen flexibility and market orientation. The article then discusses the 2012 Farm Bill debate.

At 3 key points in the history of U.S. policy, debate occurred over fixed supports.

To summarize, when confronted with the high cost of farm programs at each of these 3 decision points, the U.S. chose to keep a common framework for most program crops but to allow program parameters to be customized for individual crops. The U.S. also chose to reduce price support levels even when it meant reversing previous decisions to raise them. In short, U.S. farm policy has trended toward more program flexibility and greater market orientation.

It is well established in the academic literature that predicting price is difficult to do accurately. Thus, it should not be surprising that the occurrence and amount of payments from fixed supports can vary strikingly among crops. A solution for this outcome is program flexibility, thus, in part, customizing the program to each crop?s situation, and making the program more market oriented. As noted above, the U.S. has chosen this solution when the cost of farm supports became too high.

A relatively recent policy change further enhanced the importance of prediction accuracy. In the Federal Agriculture Improvement and Reform Act of 1996 Congress eliminated acreage set asides. While Congress gave farmers greater freedom to make planting decisions, it also eliminated a policy instrument that could be used to adjust farm programs and their cost on an on-going basis. In particular, if market price was lower than expected, set aside could be increased to reduce supply and thus reduce the cost of the fixed support program. In short, eliminating set asides increased the importance of Congress making an accurate prediction when setting fixed supports.

Performance of the price counter-cyclical program, since being enacted in the Farm Security and Rural Investment Act of 2002, is consistent with the preceding discussion. Over the 2002/03 through 2010/11 crop years, of the 9 crops included in Figures 1 through 3:

Despite the historical trend toward program flexibility and market orientation, fixed parameters remain an important feature of some U.S. farm safety net programs. In fact, the degree of fixity varies notably across the programs.

At present, most policy observers expect direct payments to be eliminated. Such a decision eliminates the safety net program with the most fixity. The counter-cyclical program also has a number of fixed parameters, notably target prices and base acres. As discussed above, since its enactment, the counter-cyclical program has tended to provide either little assistance or extended assistance. This outcome is to be expected since prices are difficult to predict accurately. A market-oriented option to determine target prices is to use a moving average of recent prices. Because a moving average follows the market rather than attempting to predict the market, it has the potential to generate a more equitable distribution of payments among crops, as well as, prevent extended periods of assistance. Such an option will be examined in a subsequent article. 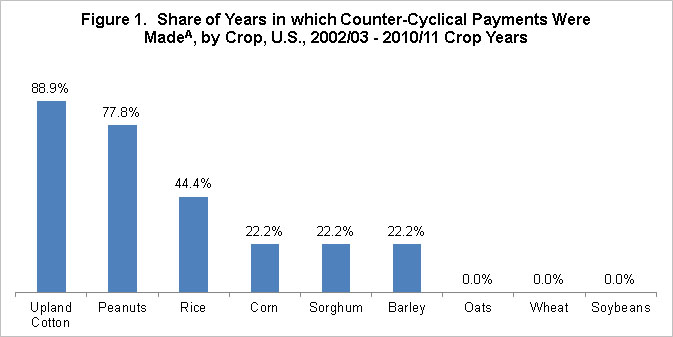 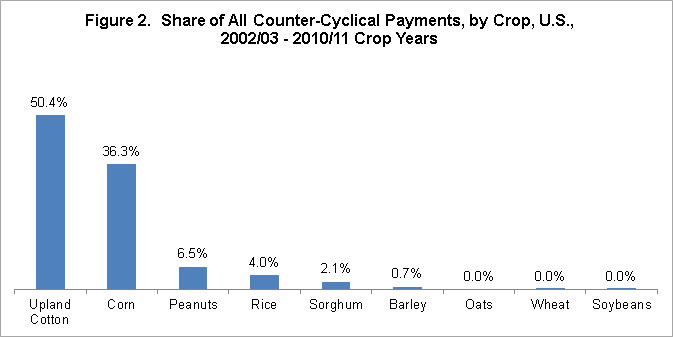 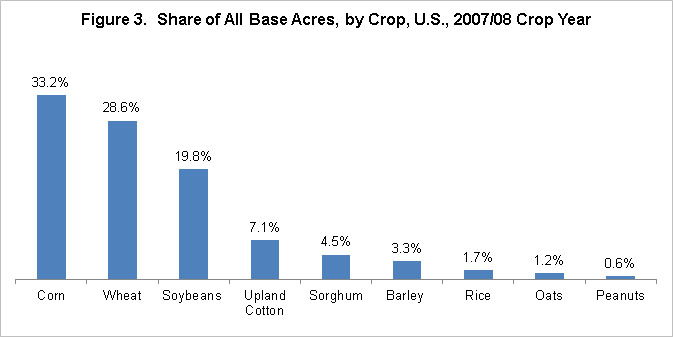 This article is also available at: http://aede.osu.edu/publications.

Source and Notes for all Figures