Average Crop Revenue Election (ACRE) – the counter-cyclical revenue program included in the 2008 Farm Bill – is not likely to make payments for corn, soybeans, or wheat in Illinois for the 2011 crop year. For ACRE to make payments on the 2012 crop year, prices would have to decrease precipitously from 2011 levels. If the 2012 actual corn yield is at its benchmark level, the market year average price for 2012 would have to be below $4.20 before ACRE payments would be received on corn in Illinois. In Illinois, 2012 market year average prices would have to be below $10.35 for soybeans and $5.81 for wheat before ACRE would make payments, given that 2012 actual yields are at their benchmark values.

ACRE is a counter-cyclical revenue program that producers can choose rather than the traditional counter-cyclical price program (click here for more detail). For a specific crop within a state, ACRE will make payments when two benchmarks are met: 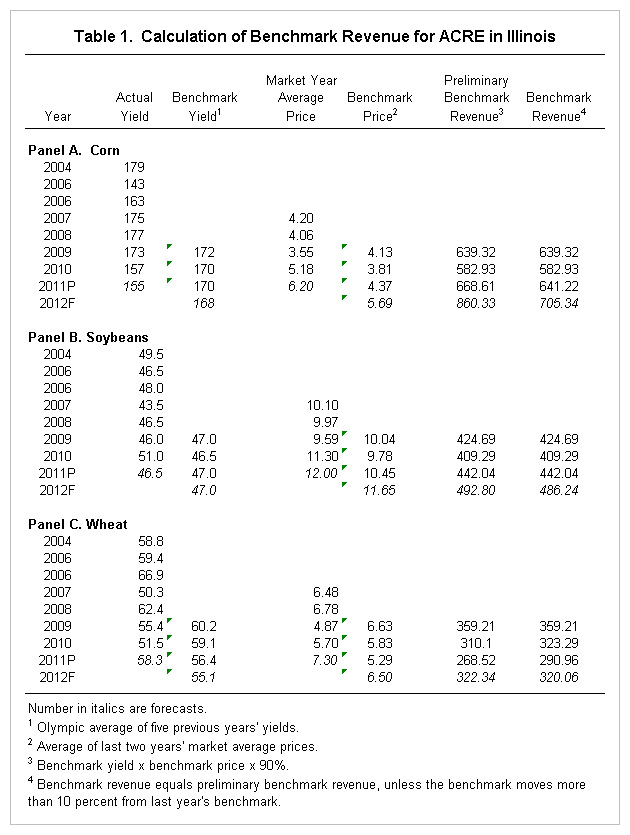 Payments for 2011 will not be known until after the market year average prices are determined. This will be in September for corn and soybeans and in June for wheat. Also, actual yields have not been released yet by the Farm Service Agency (FSA). However, actual yields can be estimated using production and acres released by the National Agricultural Statistics Service (NASS). These estimates using NASS data will be close to final yields released by FSA. Based on estimated yields, the price below which ACRE will make a payment is estimated for corn, soybeans, and wheat.

Corn: The 2011 benchmark revenue is $641.22 and actual Illinois yield will be close to 155 bushels per acre. This means that the 2012 market year average price has to be below $4.14 per bushel ($641.22 / 155) before a payment occurs. The midpoint of the March 9th World Agricultural Supply and Demand Estimates (WASDE) report corn price forecast is $6.20. The chance of prices falling below $4.14 is extremely small.

State benchmark revenues are estimated for 2012 based on

Wheat: Benchmark revenue estimated for 2012 is $320.06. Benchmark revenue is limited by the 10 percent cap on movements of benchmark from one year to the next. For ACRE to make a payment in 2012, the 2012 market year average prices would have to be below $5.81, given that the yield is at its benchmark value of 55.1 bushels per acre.

Even though ACRE payments are unlikely, selecting ACRE still may be prudent as ACRE does provide revenue protection. Farms that are already enrolled in ACRE cannot change the election for 2012. If a farm is in the traditional counter-cyclical price program, that farm can be switched to ACRE on or before June 1, 2012.