In an article entitled Giving it Away Free (see here), the Environmental Working Group proposes that Federal crop insurance programs be replaced with a yield insurance at a 70% coverage level. The 70% yield insurance would have no cost to farmers. In this blog post, size and timing of payments of 70% yield insurances are examined for corn and soybeans in select Illinois counties. Payments from a 70% yield policy would generally be low. As would be expected, areas with higher yield variability would receive higher payments. Payouts from the policy would occur primarily in drought years like 1988, not necessarily corresponding to low revenue years.

For a number of reasons, historical payouts may understate future payouts. An evaluation of likely payments from 70% yield insurances is given in the iFarm Crop Insurance Payment Evaluator available in the crop insurance section of farmdoc (see here). These payments represent expectations for 2012: if 2012 could be repeated a number of times the average of insurance payments would equal the expectations. Payments are given for enterprise units using 2012 projected prices of $5.68 per bushel for corn and $12.55 per bushel for soybeans. 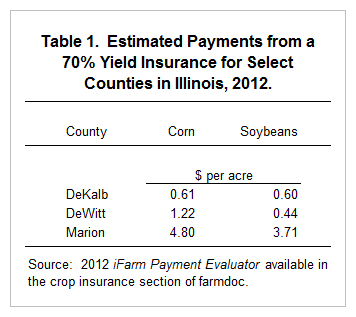 In Illinois, yield insurances tend to make larger payments in very few years, as illustrated in Figure 1. Figure 1 shows a 70% crop insurance program had it existed for all farms in DeWitt County Illinois. Bars give yearly payments averaged across all farms in DeWitt County, stated in terms of a $5.68 projected price. These measures were used to state historical payments in terms of today?s values. Average crop insurance payments only exceed $10 per acre in three years: 1980, 1983, and 1988. 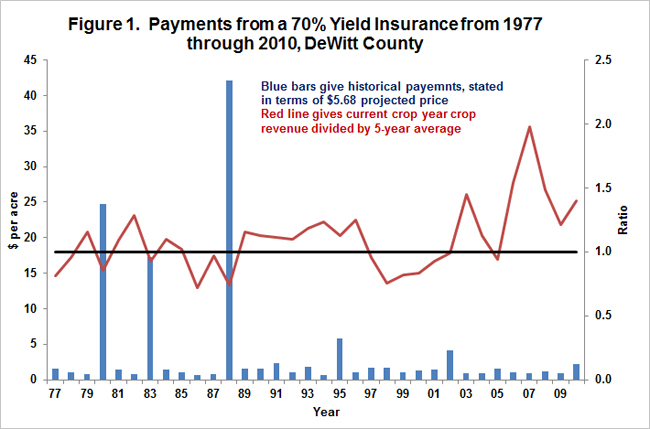 The 70% yield insurance does not necessarily make payments in years in which crop revenue is low. Figure 1 also shows a read line that gives a ratio of the current year?s crop revenue (yield x price) relative to the average of the previous five-year average. A value of 1.0 means that the current year revenue equals the average revenue of the five previous years. Ratios below 1.0 indicate financial stress within agriculture. The ratio was below 1.0 for an extended period during the mid-1980s and late 1990s (see Figure 1), both periods of financial stress within agriculture. Payments from 70% yield insurance do not match well periods of financial stress. This explains why farmer prefer revenue insurances, which tend to better match periods of revenue shortfalls. It also explains why so called shallow loss programs like ARRM have farmer support, as they tend to make payments in years when revenue is low (see here).

Yield insurances with 70% coverage level would make very small payments on most Illinois farms. Payments from this yield insurance would not necessarily match years of low income.