The 2012 Farm Bill currently is being debated, with some prospects that it will be passed this year. Much debate centers on the commodity title and how to reconfigure direct payments, the counter-cyclical price and revenue programs (e.g., target price and ACRE programs), and the standing disaster assistance programs (e.g., SURE). Predicting what form these programs will take is difficult. At this point, however, it appears that direct payments will not be included and overall budget outlays authorized in the 2012 Farm Bill will be less than in previous Farm Bills. What likely will result is a counter-cyclical revenue program somewhat similar to the current ACRE program. An ACRE-like program will have risk implications. The risk implications are discussed in this post assuming that providing a safety net is a goal of the 2012 Farm Bill.

Crop insurance will not provide protection against revenue declines that occur across years, of which price declines are a prime example. To illustrate, take a corn revenue policy that has a 180 bushel Trend-Adjusted Actual Production History (TA-APH) and the 2012 projected price of $5.68. A choice of the highest coverage level of 85% results in a guarantee of $869. If the farmer gets the same 180 bushel yield in 2012 as the TA-APH yield, the price can decline to $4.83 without the farm receiving an insurance payment ($4.83 = $869 guarantee / 180 bushel yield). Given a decline of the harvest price to $4.83, the projected price for 2013 likely would be near $4.83. If $4.83 is the 2013 projected price and the 2013 yield equals the 2013 TA-APH yield, the harvest price could fall to $4.11 without the farmer receiving a crop insurance payment. A price decrease to a $4.11 harvest price in 2013 is not unrealistic.

Two years of trend line or above yields could result in price scenario similar to that given above.

Multiple years of relatively low prices have occurred in the past. To illustrate, Figure 1 shows price histories for corn, soybeans, wheat, cotton, and rice; five crops that receive commodity program payments. Each year’s price is stated as the current year price divided by the average of the five previous prices. A ratio below one indicates that that year’s price is below the previous five-year average. As can be seen in Figure 1, all five commodities had two periods where price ratios where below one: 1) in the mid-1980s and 2) in the late 1990s and early 2000s. Both of these periods were times of financial stress in agriculture. 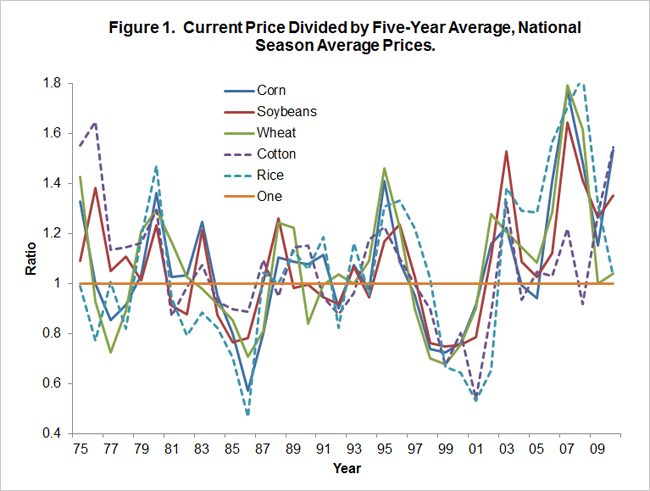 Lost revenue due to low prices during the mid-1980s and late 1990s would not have been covered by crop insurance, because projected prices would have adjusted downward. Not covering these losses suggests a role for Farm Bill commodity programs. Farm Bill commodity programs can cover revenue declines of a multi-year nature due to declining prices or other factors. These have been labeled “shallow losses” because they occur before crop insurance pays, but these shallow losses are what have caused financial stress in the agricultural sector in the past.

One design of a commodity program that provides multi-year protection is to have the guarantee based on historical revenue. Many of the current program proposals base their guarantees on multi-year revenue. The Aggregate Risk and Revenue Program (ARRM) sponsored by Senators Brown, Thune, Durbin, and Lugar uses a five-year Olympic average of revenue where revenue equals harvest price times Crop Reporting District (CRD) yields. The Ag Risk Coverage (ARC) program that was put forward to the Super Committee based its guarantee on an Olympic average of revenue, where revenue is based on the national season average price and farm yield. The Revenue Loss Assistance Program (RLAP) proposed by Senators Conrad, Baucus, and Hoeven bases its guarantee on the Olympic average of five-years of national season average price times a farm’s historical yield.

Yields to Use in Revenue Guarantee