On March 31st, the U.S. Department of Agriculture reported that 95.9 million acres of corn are projected to be planted in 2012. If these acres are planted, the 95.9 million acres will be 3.9 million acres more than were planted in 2011 and 16.7 million more acres than the average 2001-2005 plantings. Prospective 2012 planted acres are 21 percent higher than the 2001-05 average. While planted acres have increased, where corn is produced in the United States has not changed much. Over the past decade, there have been modest shift in plantings from the eastern to western corn-belt. North Dakota has increased share of acres. Overall though, there is remarkable stability in shares of planted corn acres across states. This suggests that national expected yield should not change much because of where corn is planted and that continued planting of 95.9 million or more acres of corn depends on success with more corn intense rotations.

Ranks and Shares of Planted Acres by State 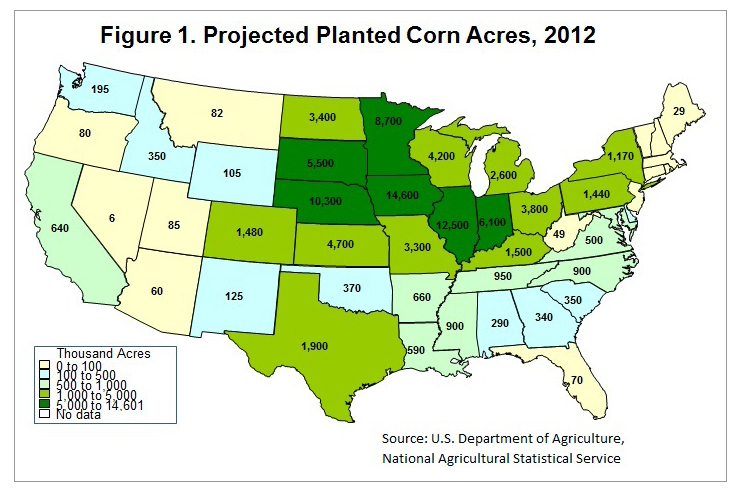 In its March 31st report, USDA listed prospective 2012 plantings by state (see Figure 1). The six states with the most acres are: 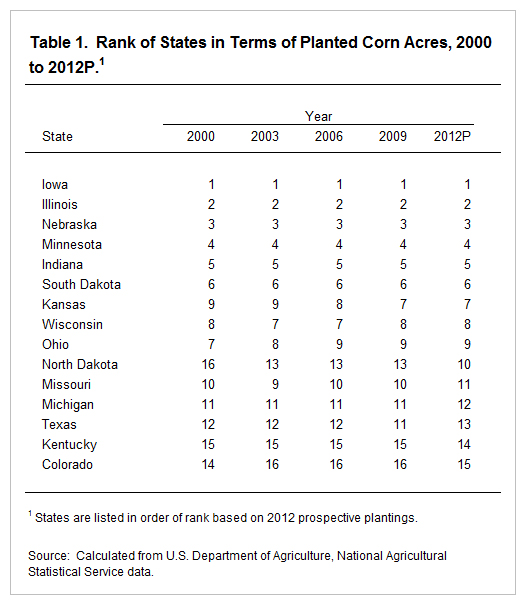 These six states have had the same rank in terms of planted acres in each year since 2000 (see Table 1). In other words, Iowa has had the most acres in each year since 2000, Illinois the second most number of acres, and so on. For the top 15 ranked states in 2012, there have had relatively minor shifts in ranks between 2000 and 2012. When ranks are compared between 2000 and 2012, only North Dakota changed ranks by more than two places.

As one would expect given that ranks are stable, differences in state’s shares of production between 2000 and 2012 are small (see Table 2). For example, Iowa planted 25 percent of the acres in the U.S. during 2000. In 2012, Iowa’s projected plantings of corn are 25 percent of production, exactly the same share as in 2000. Of the 15 largest corn planting states, seven did not have a share change between 2000 and 2012: Iowa, Minnesota, Wisconsin, Ohio, Missouri, Kentucky, and Colorado (see final column of Table 2). Three states had decreases: Illinois, Indiana, and Texas each had a decrease of 1 percentage point. Four states had increases: North Dakota with a 4 percentage point increase and Nebraska, South Dakota, and Kansas, and Michigan each had a 1 percentage point increase. 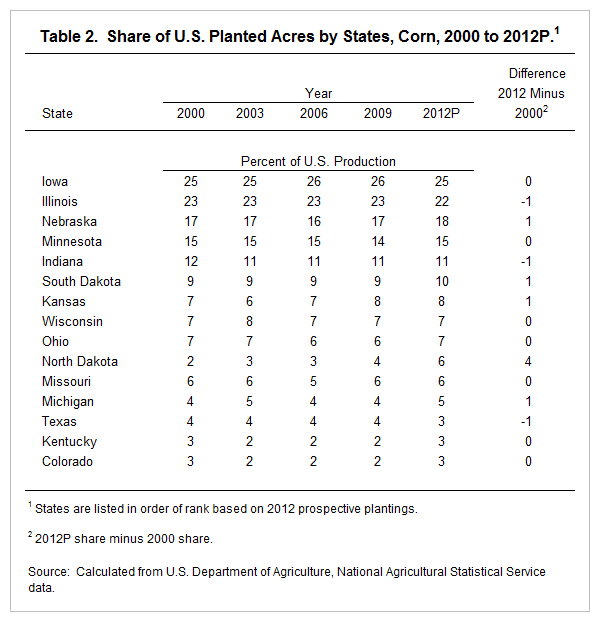 Stable shares across states have two implications. First, most of the increase in corn planting is not occurring in new areas where corn has not been produced before. Rather corn plantings are becoming more intense in areas where corn has been produced before. As a result, land productivity where corn is being grown has not changed much over time. As planted acres increase, this suggests that national expected yield per acre because of productivity changes in farmland. However, national expected yield per acre may change because use of more intense corn rotations could impact yields.