The role of speculation in energy markets has flared up again. Earlier this month, Joseph P. Kennedy II, former U.S. Congressman from Massachusetts, made the following statements,

But there are factors contributing to the high price of oil that we can do something about. Chief among them is the effect of “pure” speculators — investors who buy and sell oil futures but never take physical possession of actual barrels of oil. These middlemen add little value and lots of cost as they bid up the price of oil in pursuit of financial gain. They should be banned from the world’s commodity exchanges, which could drive down the price of oil by as much as 40 percent and the price of gasoline by as much as $1 a gallon.

Rising gas prices means a rough ride for a lot of families. We can’t afford a situation where speculators artificially manipulate markets by buying up oil, creating the perception of a shortage and driving prices higher, only to flip the oil for a quick profit.

The debate over the impact of speculation in commodity markets has been roiling ever since crude oil prices spiked to new all-time highs in the summer of 2008. In a June 2011 post we examined this issue and reported that statistical tests generally fail to show a relationship between speculative positions and commodity futures price movements. We revisit the controversy in today’s post, focusing on some recent data for energy futures prices and positions held by commodity index funds. While there is some discussion about exactly which type of “speculator” is supposedly causing the problem, there is little doubt that long-only commodity index funds have been at the center of recent controversies. In short, a tidal wave of investment in commodity index funds is purported to have overwhelmed the normal functioning of commodity futures markets, most notably crude oil.

Figures 1 and 2 show the movement of futures prices and commodity index positions in crude oil and natural gas, respectively, for a recent six-month interval (September 2011 to the end of February 2012). The futures price data reflect the nearby futures prices for New York Mercantile Exchange (NYMEX) West Texas Intermediate (WTI) crude oil futures and NYMEX natural gas futures. The positions held by index investors are those reported by the Commodity Futures Trading Commission (CFTC) in their Index Investment Data (IID) report. The IID positions are the net long positions reported to the CFTC for groups (e.g., swap dealers, institutions, and exchange traded funds) holding index investments that track commodity futures prices. Our research indicates that the IID positions are the best available measurement of index investment in commodity futures markets (click here for more information on the IID report). 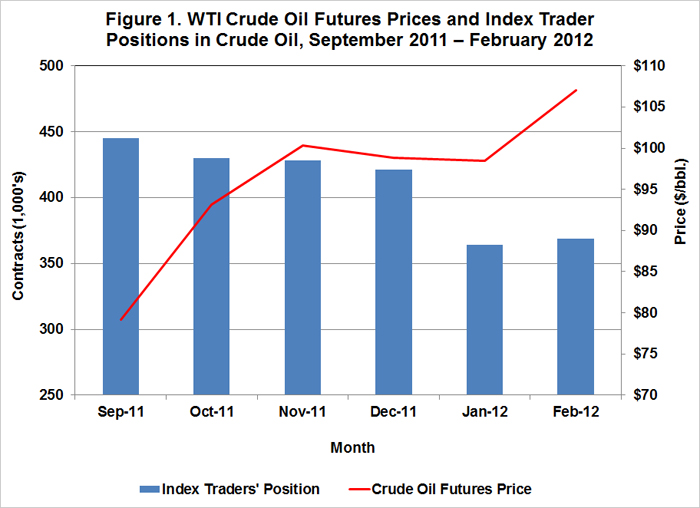 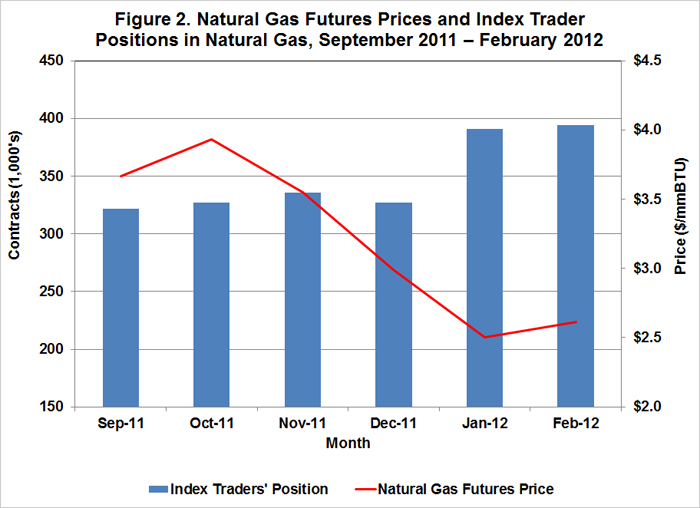 Using the data presented in Figures 1 and 2, the following observations can be made with regard to market activity over the six months from the end of September 2011 to the end of February 2012:

While instructive the data presented in Figures 1 and 2 is limited to only one recent period. Numerous academic studies have been completed in the past five years on the impact of speculation in commodity futures markets, and these studies use a variety of data, methods, and definitions of speculation. The evidence in these studies tilts decidedly against the view that speculation has been harmful. There is no “smoking gun” connecting speculation to the rise in gas prices. In fact, just the opposite is likely to be true – expanding market participation by different kinds of speculators likely reduces the cost of hedging, dampens price volatility, and better integrates commodity markets with financial markets.

Given the lack of evidence for a link between speculation and rising gasoline prices, it is a short leap to the conclusion that measures proposed to “crackdown” on speculation will likely do more harm than good. For example, the President’s proposal last week would give the CFTC the authority to raise margins on traders in crude oil futures markets. This belies a fundamental misunderstanding of the role of margins in futures markets. Margins are first and foremost a form of collateral to assure that the losing side in a futures contract is able to pay up. Raising margins increases the cost of maintaining futures positions, which in turn can lead to a shrinking pool of speculative capital available to absorb the orders of those seeking to hedge risks. An increase in price volatility then follows–the reverse of the intended outcome.

There is an unfortunate cycle in history of pinning the blame for rapidly rising prices on market speculators. It appears we have been reliving this cycle in recent years. This is not to say that commodity futures markets are perfect and without need of regulation in the public interest. The recent MF Global bankruptcy is a dramatic example of the problems that can and do occur. Focusing our resources on this type of regulatory problem is surely more in the broad public interest than counter-productive efforts to rein in speculation.