The Farm Bill recently passed by the Ag Senate Committee proposes to replace the Direct, Counter-cyclical, and ACRE programs with a crop-specific revenue program called Ag Risk Coverage (ARC). Details about the ARC program have been provided in recent posts (here and here). Today I will focus on the proposed $50,000 limit on total payments for ARC and what types of grain farms might be affected by this limitation using some Illinois county examples. These examples show that payment limitations could affect a significant number of grain farms if ARC payments are triggered over the next Farm Bill period. Furthermore, since larger payments are triggered during periods of greater revenue losses, payment limits will tend to be met for smaller operations during periods when support is, arguably, most needed.

To examine the potential impact of ARC payment limits, three Illinois county examples are provided below. The examples were constructed assuming a grain farm operation with 55% of their planted acres in corn and the remaining 45% planted to soybeans. Estimated county-level ARC payments are based on historical NASS yield and price data from 1972 to 2010 using similar methods as those used in this post, with payments scaled to 2011 crop year levels. Payment estimates are reported on a per planted acre basis which incorporates the 0.80 payment rate for the ARC program.

The first example is for DeKalb county, located in north-central Illinois. Figure 1 shows that ARC payments would have been received in 10 out of the 35 years during the mid-1980s, from 1998 to 2001, and also in the 2005 crop year. The size of payments ranged from less than $5 per acre to $50 per acre, depending on the size of the revenue loss relative to the benchmark revenue (revenue guarantee) in a given year. Figure 2 reports the farm entity size in total planted acres which would lead to ARC payment limitations being exceeded. The average farm size which would lead to the payment limitation being reached is just over 5,000 acres. In 4 out of the 10 ARC payment years, farms with less than 2,000 acres would have been subject to the payment limitation. 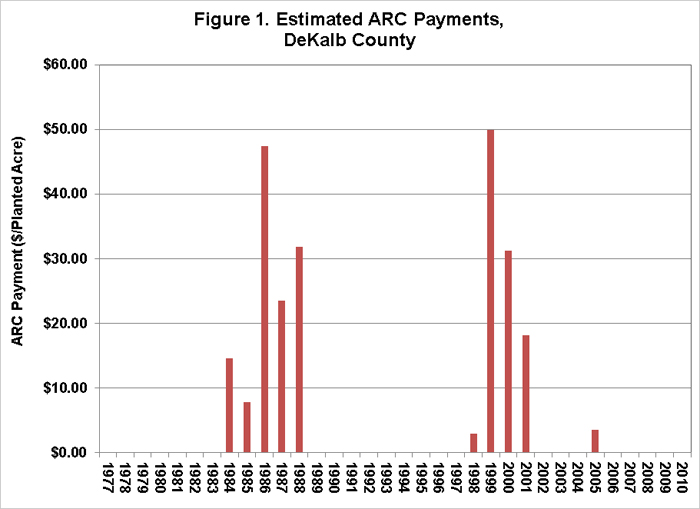 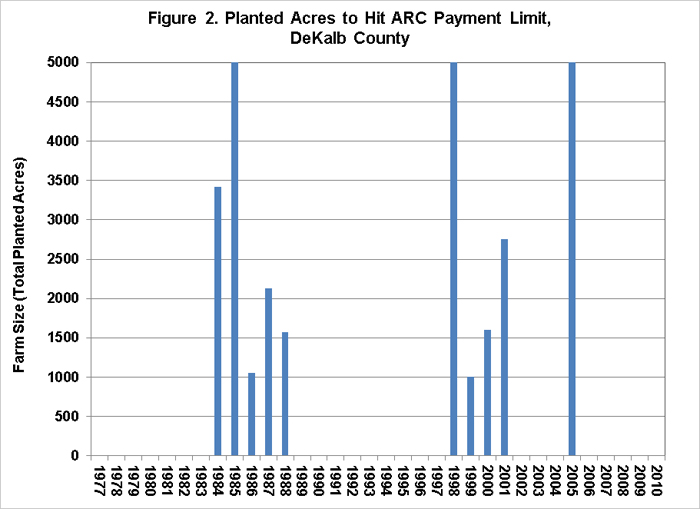 The second example is for McLean county, located in central Illinois. Figure 3 shows that ARC payments would have been triggered in 13 of the 35 years, with payment levels ranging from less than $5 per acre to more than $50 per acre. The average farm size at which payment limits are exceeded is just over 4,100 planted acres. Farms with around 1,500 acres or less would face payment limits in 7 out of the 13 payment years, or in more than 50% of the years in which payments are triggered. 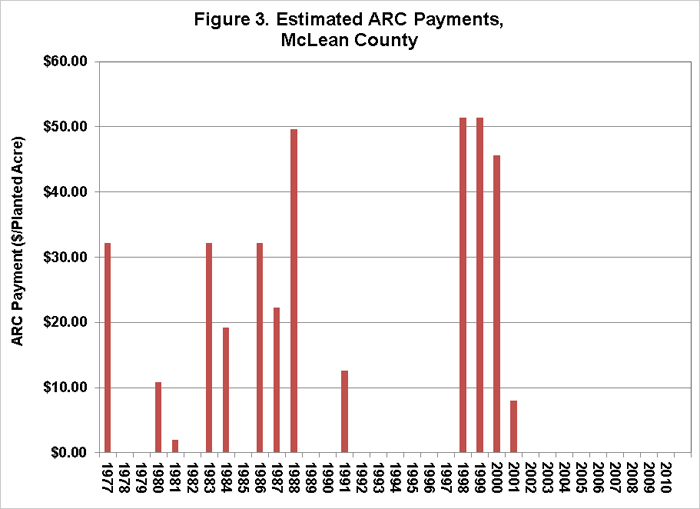 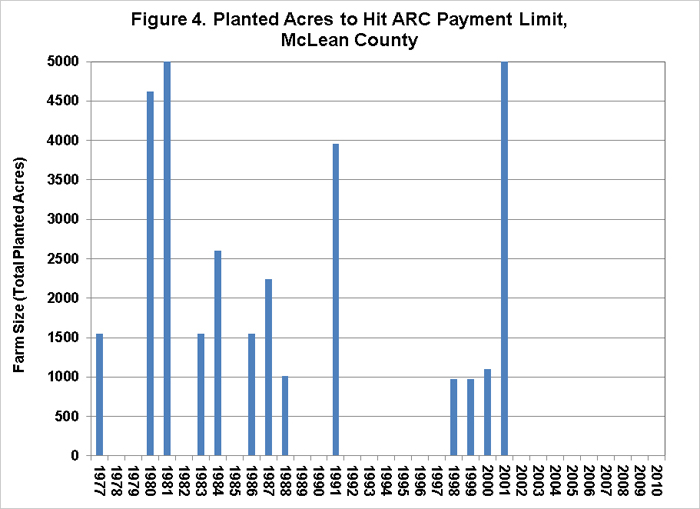 The third and final example is for Effingham county, located in south-central Illinois. County ARC payments would have been triggered in 10 of the 35 years examined, with payment levels ranging from less than $5 per planted acre to nearly $45 per planted acre. The average farm size at which payment limits would be exceeded in the 10 payment years is just over 5,500 acres. Farms with less than 2,000 acres planted to corn and soybeans would have exceeded the payment limitation in 5 of those payment years, or 50% of years in which payments were received. 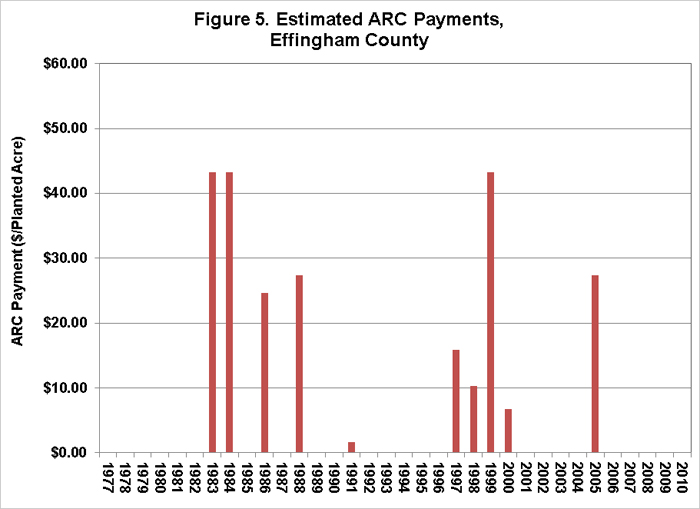 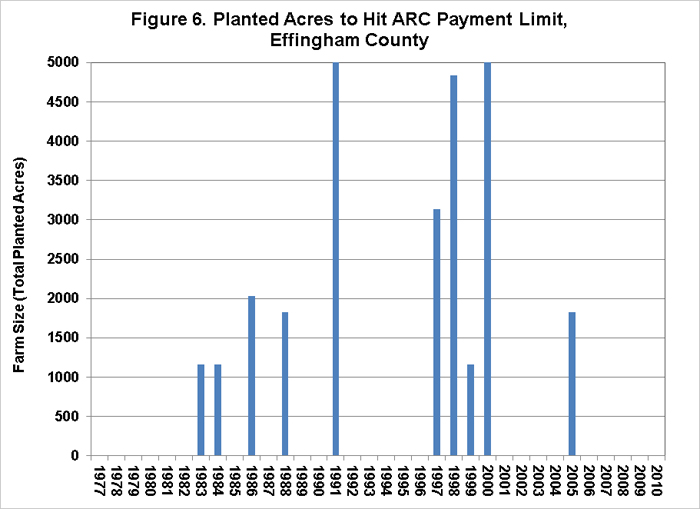 The Senate Ag Committee’s 2012 Farm Bill includes some major changes to the Commodity Title, including the introduction of the revenue-based ARC program which would replace most existing commodity programs. ARC protects against declines in farm revenues relative to a historical average benchmark revenue level, providing coverage against events not covered by crop insurance such as declining prices across multiple years.

The proposed payment limitation for ARC program payments has been set at $50,000 at the farm entity level. The analysis of three Illinois county examples has shown that, on average, this payment limitation would likely impact farms with more than 4,000 to 5,000 acres planted to corn and soybeans if ARC payments are triggered.

However, the historical analysis also shows that approximately 50% of the years in which ARC payments are made on corn and/or soybean acres would result in payment limits being met for farm sizes in the range of 1,500 to 2,000 planted acres. This occurs in years where large payments are triggered from the ARC program. Years in which large ARC payments are made indicate periods of large declines in revenue relative to the benchmark, implying that the ARC payment limitation will tend to affect smaller operations during periods of greater financial stress.

ARC is designed as a program with a risk management focus. This differs from the income support nature of fixed direct payments – one of the programs ARC would replace – which were also subject to annual payment limitations by entity. It is important to remember that ARC is outlined as an optional program, and that producers will continue to have access to subsidized crop insurance programs. Still, the effects of an annual payment limitation, and conditions under which that payment limitation would be met for a program that provides payments when farm revenues decline is something which should be carefully considered as the Farm Bill process continues.