Agricultural Risk Coverage (ARC) is a revenue-based, proposed Farm Bill program passed by the Senate Agriculture Committee. In this post, net returns for corn are examined using prices and ARC payments detailed in a May 9, 2012 post here. At $4.00 per bushel and below corn prices, ARC will make payments, aiding in cushioning revenue losses. However, ARC payments are not large enough is assure profits, as farmers who cash rent will face losses at prices below $4.00 per bushel. 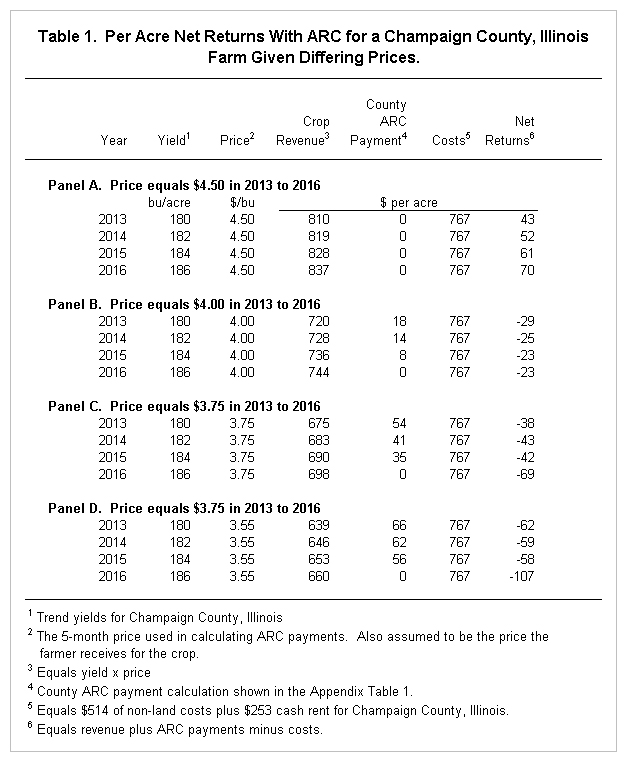 Net returns equal crop revenue plus ARC payments minus costs. Costs total $767 per acre and are assumed to be the same across all years. Costs include:

Net Returns for a $4.50 per Bushel Corn Price

Net Returns for a $4.00 per Bushel Corn Price

Net Returns for a $3.75 per Bushel Corn Price

Net Returns for a $3.55 per Bushel Corn Price

In general, returns to corn and soybean farms have been above average in recent years because of relatively high corn prices. U.S.D.A. reports average national prices at $5.24 per bushel for the 2010 marketing year and projected $6.10 for the 2011 market year. Given recent increases in production and land costs, a $4.50 corn price will result in much lower returns than 2010 and 2011 prices. Prices below $4.00 will result in losses for corn production.

ARC will provide payments that cushion low revenues. ARC payments will not cover the entire decline in revenue because of the structure of the ARC program; hence, losses are possible with ARC. This occurs because ARC will not make payments until revenue has declined 11% from its benchmark revenue, then only a portion of the losses will be covered for the next 10 percent decline in revenue.

If a string of low prices over several years occurs, ARC will make larger payments in the beginning years. These payments then will decline through time. These payments will allow farmers to adjust to lower prices. Moreover, costs likely would adjust down to a lower price. For example, cash rents likely would decline in an extended period of low prices occur. Hence, ARC can be viewed as a transition program designed to aid farmers by cushioning revenue from market changes, ARC will not establish a permanent level of support around a specific price or revenue. 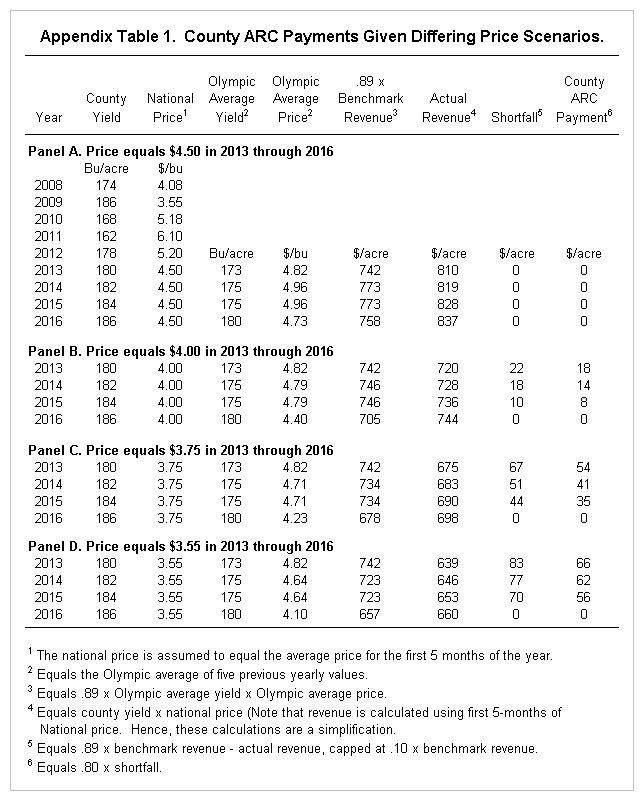