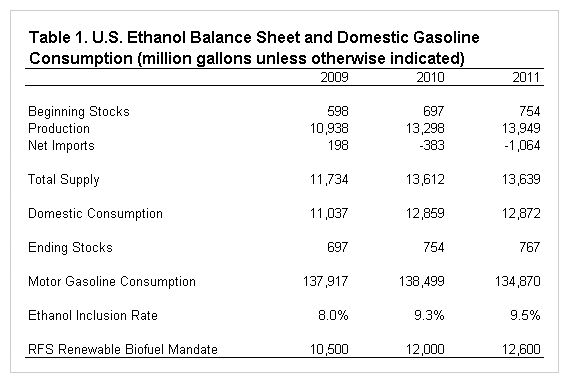 The blend wall has important implications for ethanol production and consumption after 2012. In particular, the maximum levels of ethanol blending under current 10 percent blend restrictions may soon be less than the RFS blending requirements. The requirements for renewable biofuel blending was at 12.6 billion gallons in 2011; is at 13.2 billion gallons this year; and increases to 13.8 billion in 2013, 14.4 billion in 2014 and 15 billion in 2015. It seems highly likely that the blend wall will be binding in 2013 and this will constrain domestic ethanol consumption to be less than the RFS mandate of 13.8 billion gallons. Some uncertainty is introduced because the blend wall (in gallons) can change with total motor gasoline consumption and blenders have the ability to meet some of the blending requirements from credits generated from recent blending in excess of the requirements.

What this means is that to meet RFS requirements and continue expanding domestic ethanol production, and implicitly the use of corn, the blend wall will have to be expanded soon. This issue assumes even more importance in light of the accelerating advanced biofuel requirements beginning this year. There are only two obvious ways for the blend wall to expand. The first is rapid implementation of 15 percent ethanol blends (E15) recently approved by the EPA. The second is for total motor gasoline consumption to increase fairly rapidly. Domestic ethanol production could also increase beyond current levels without an expansion in the blend wall if ethanol exports increased. Following is a brief discussion of these three ways through or around the current blend wall.

Implementation of E15 for 2001 and newer vehicle models, as approved by EPA, would be the most logical way to expand the ethanol blend wall. That implementation, however, continues to be delayed by a number of factors. These include the lack of approval of some state fuel standards, the lack of clarification of liability issues associated with dispensing E15, the need to install blender pumps at retail stations, and the need to clarify engine warranties for E15. In addition, there continues to be a fair amount of foot-dragging by industry participants in the implementation process. These factors do not bode well for a rapid, widespread implementation of E15 any time soon.

As indicated earlier, the RFS requirement for renewable biofuels in 2013 is 13.8 billion gallons. With low-level ethanol blends capped at 10 percent, a maximum inclusion rate of ethanol in the gasoline supply might be near 9.8 percent. To blend 13.8 billion gallons of ethanol, then, would require total motor gasoline consumption of about 140.8 billion gallons in 2013. That is nearly 4.2 percent higher than the current EIA forecast for 2012. Such a large increase would likely require a much higher rate of domestic economic growth than is currently expected for 2013. In addition, there is continued downward pressure on gasoline consumption due to more fuel efficient vehicles being added to the U.S. fleet and apparent changes in driving habits as the population ages. The overall picture is not optimistic for increases in gasoline consumption to move the blend wall forward substantially.

Even without an expanded blend wall, ethanol production could expand beyond current levels with a robust export market. As indicated in Figure 1, net U.S. trade of ethanol for the U.S. was positive only in the last two years, but exceeded a billion gallons in 2011. (Like in Table 1, note that a negative figure for net imports in Figure 1 is actually a positive value for net exports.) Large exports in 2011 reflected two developments. One was large imports by Brazil as ethanol production there was reduced by a small sugarcane crop and high sugar prices. The other was the export push in the last quarter of the year as blenders captured the tax credit before it expired. Exports averaged 75 million gallons per month in the first two months of 2012, but that rate is expected to slow as Brazilian production returns to a more normal rate and it is unclear if the Brazilian government will return the minimum inclusion rate back to 25 percent (it was lowered to 20 percent in 2011). The largest market for U.S. ethanol other than Brazil has been Canada and there is potential for additional modest growth in that market. Overall, potential for export growth is thought to be small and not large enough to substantially grow overall market size. 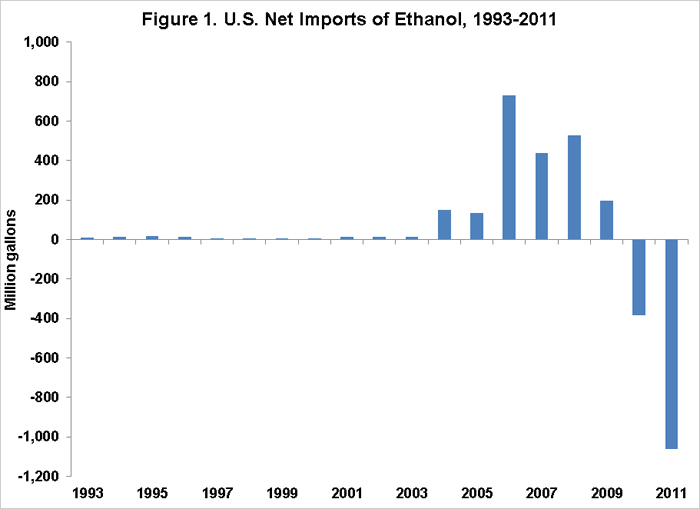 The implication of this analysis is that it is going to be quite difficult to expand or go around the current 10 percent blend wall for domestic ethanol consumption in the near future. Some loosening could occur further down the road if the issues impeding E15 implementation are resolved. However, it does appear that the long boom in U.S. ethanol production is coming to a close. It is important to keep in mind that this does not mean that ethanol production will fall, as the RFS mandate will keep production at least at the level implied by the 10 percent blend wall (as long as blending economics favor ethanol over other gasoline components). This conclusion also implies that the use of corn in the U.S. for ethanol production has reached a plateau for the time being.