The tightness of the old crop corn supply and demand balance is a subject of considerable debate as we head into the final quarter of the 2011/12 marketing year. The final degree of tightness will be a function of several variables, including the accuracy of previous USDA stock estimates, the availability and price of feed wheat this summer, the amount of “early” harvested corn available in August, and the consumption pace of end-users. This latter variable is mainly a function of livestock numbers both in the U.S. and overseas and ethanol production here in the U.S. Since livestock feeders have a limited capacity to adjust usage over a few months, ethanol producers would likely bear the brunt of any additional rationing if it is necessary.

From this perspective, the key question is the price of corn that will force ethanol plants to throttle back production or shutdown completely. To investigate this issue we use a model of an Iowa ethanol plant introduced in a recent post. This model is meant to be representative of an “average” ethanol plant constructed in the last five years. It should be kept in mind that there is substantial variation in capacity and production efficiency across the industry.

The “shutdown” level of an ethanol plant is simply the point where revenue no longer covers the variable cost of production. Continuing production beyond this point only adds to the losses incurred via fixed costs. The shutdown point can be reached due to adverse movements in either output or input prices, or some combination of both. Since corn (an input) is of interest here, we want to figure out the price of corn that just equates total variable costs, given other variable costs and revenue from ethanol production. An example will help illustrate. On December 2, 2011 the price of ethanol at Iowa plants was $2.70 per gallon and dried distillers grain (DDGS) was $198.25 per ton. This generates total revenue of $9.25 per bushel of corn processed assuming each bushel of corn yields 2.8 gallons of ethanol and 17 pounds of DDGS. If all non-corn variable costs equal $0.59 per bushel of corn processed, then the ethanol plant could pay up to $9.25 – $0.59 = $8.66 per bushel of corn and cover all variable costs. Paying any more than this amount would push the plant past the shutdown price where variable costs are no longer covered.
Figure 1 presents the maximum bid (shutdown) price of corn for the representative Iowa ethanol plant starting in January 2007. The procedure used to compute the shutdown prices differs from the previous example in only one respect. Since there is a highly positive relationship between corn and DDGS prices, it does not make sense in the calculations to assume that the price of DDGS does not increase as the price of corn is increased. The calculations presented in Figure 1 allow the price of DDGS to increase with the price of corn based on the latest ratio of DDGS to corn prices. 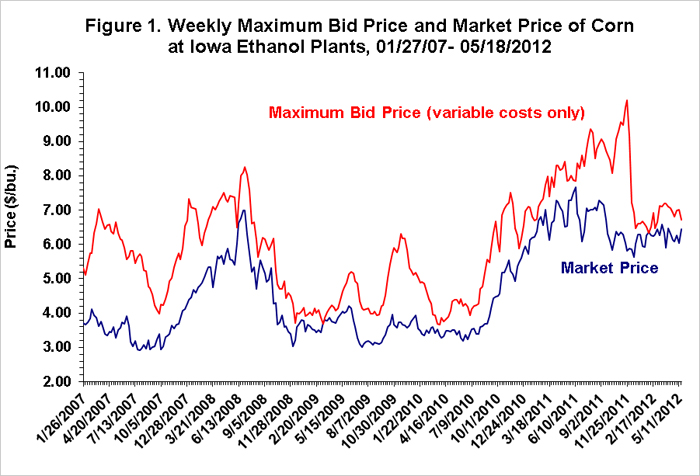 It is no surprise that the computed shutdown price has varied widely over time. This largely reflects the changing price of ethanol since we are fixing other variable costs and “backing out” the price of corn that equals all of the revenue less these other variable costs. Two peaks in the shutdown price are observed, $8.25 per bushel in July 2008 and $10.21 per bushel in November 2011. A low of $3.69 per bushel was reached in March of 2009 and 2010. The shutdown price for most of spring 2012 exceeded $7. The most recent observation on May 18th was $6.71 per bushel.

We can now return to the key question posed earlier. That is, how high would the price of corn have to go this summer in order to induce ethanol plants to reduce production? Based on the most recent trends in ethanol prices the answer is about $6.75 per bushel. It is interesting to note that the market price of corn the last few weeks has only been about 25 to 35 cents below this level. While weekly ethanol production figures have recently shown little if any declines versus last year, corn prices have reached a high enough level where less efficient plants may begin to throttle back.

Further rationing of old crop corn usage is not out of the question given emerging wheat production problems in the U.S., Russia, and the Ukraine, uncertainty about the accuracy of previous stocks estimates, or less than expected availability of new crop corn in August. If this scenario does come about, then ethanol producers will probably have to do much of the adjusting. We estimate that corn prices will have to be $6.75 or above in order to force ethanol producers to cut back.