With the cookout season in full swing, it’s a good time to take a close look at beef supplies and cattle numbers. Steaks, roasts and other retail cuts come almost exclusively from steers and heifers. Beef from steers and heifers – often called “fed beef” – accounts for about 85% of total beef production. The remaining 15% consists of cuts from cows and bulls (used primarily in further-processed products) and calves (for veal and other specialty items).

Beef cows are the “factory” necessary for the production of beef calves, which become beef cattle and ultimately beef. Therefore, any change in cow numbers affects every segment of the cattle industry. US beef cow numbers peaked in 1975 at 45.7 million head, and have been in a fairly steady decline ever since (Figure 1). The beef cow inventory on January 1, 2012 was just 29.9 million head, a level last seen in 1962. 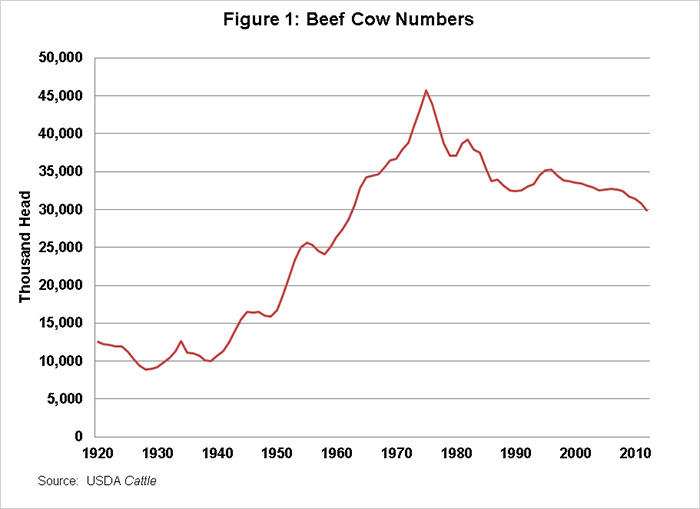 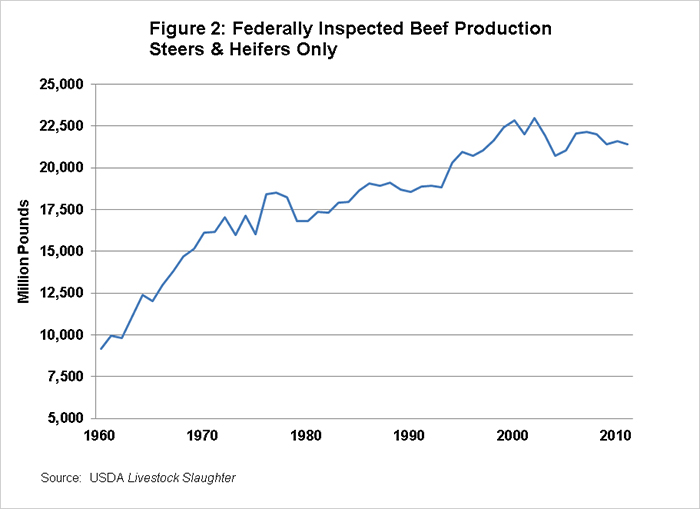 How can such a thing be possible? One part of the answer is faster growth rates, which has allowed the industry to stretch supplies by moving cattle through the production pipeline faster. The other part is feeding the animals to heavier slaughter weights – and as a result, heavier carcass weights (Figure 3). While these changes have enabled the beef industry to “do more with less” for the past three-plus decades, the ability to offset fewer animals with faster growth rates and heavier slaughter weights cannot continue indefinitely. 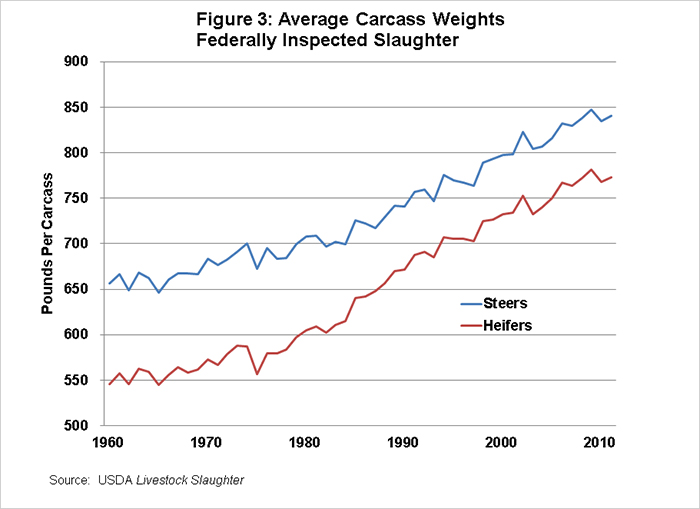 Feeding cattle to heavier weights is not without its problems One drawback is that as cattle get bigger, so do the individual cuts of beef. While important to shoppers, serving size and portion control is particularly important for restaurants and other retail establishments. It may be possible to slice certain cuts of beef thinner to compensate for their larger diameter, but for many items this can adversely affect the cooking and eating properties, as well as other aspects of the overall eating experience. After all, no one ever walked into a restaurant and ordered a thin, juicy steak.

Another drawback to heavier weights is that animals, like humans, tend to deposit more fat than muscle once they reach their mature size. Overly fat animals – what the industry refers to as Yield Grade 4s (Y4s) and Yield Grade 5s (Y5s) – are heavily discounted by packers because the excess fat must be trimmed off at some point in the process.

To date, consumers, retailers and restaurants/retail food establishments have been largely unaffected by declining cattle numbers. In contrast, those segments of the industry that rely on numbers rather than tonnage to achieve operational efficiency – namely cattle feeding and cattle slaughter – have felt the pinch of tight cattle supplies, and both segments continue to struggle with excess capacity. Over the long run, too few cattle forces feedlots to close and packing plants to shut down, sending reverberations up and down the supply chain.

The alternative is to rebuild the beef cow herd, and the first step in this process will be for producers to hold back heifers that normally would go into feedlots and instead use them for breeding purposes. USDA’s January 2012 Cattle inventory report showed a modest 1% increase in beef replacement heifers, but it remains to be seen whether this is actually the start of the rebuilding process or just statistical “noise.” On a national basis, this 1% increase totaled just 73,000 heifers. To put this number into perspective, the offspring from 73,000 heifers would supply the packing industry for about four hours. Obviously, it will take a much bigger increase than this to turn things around.

The mid-year USDA Cattle report, scheduled for release on July 20, may provide some clues about whether or not the rebuilding process has actually begun. If the July report is inconclusive, then the January 2013 Cattle report will be our next opportunity to find out if a turnaround in beef cow numbers is underway.