NASS reports MYA prices since 1866 (see Figure 1). MYA prices represent the average of cash prices received by farmers in the United States for corn sold during the marketing year. Since 1866, corn prices have generally risen, containing time periods in which corn price vary substantially around an average. Since World War II, there have been three of these periods. Between World War II up to the early-1970s, corn prices varied around an average price of $1.27 per bushel. Between the early-1970s to the mid-2000s, corn price varied around $2.37 per bushel. Since the mid-2000s, corn prices appear to have reached a new plateau and have averaged $4.37 per bushel. Generally, these periods are separated by structural changes in demand for corn. Predicting when these structural changes will occur is difficult. 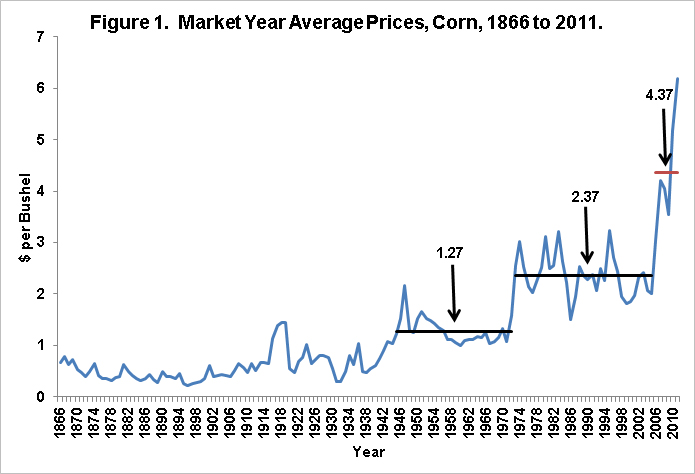 Changes in corn prices from year-to-year can be large, as is illustrated in Figure 2. Visual inspection of price changes suggests that price variability is larger pre-World War II than post-World War II. This can be illustrated by the looking at the number of times prices have experienced a 40% decrease. There have been five years in which prices fell more than 40%: 1895, 1920, 1931, 1937, and 1948. Four of the five years occur prior to the beginning of World War II. None of these 40% decreases have occurred during recent times, which are defined here as the period since 1973 when corn prices rose to the $2.37 plateau. 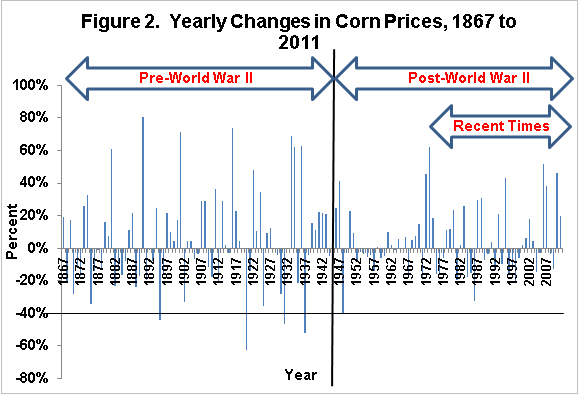 Table 1 provides more quantification of less variability in recent times by showing frequencies of yearly price changes. For the entire time period, 3% of the time prices decrease by 40% or more. The frequency is 5% per-World War II and 2% post-WWII. In recent times, price decreases of 40% or more have not occurred. 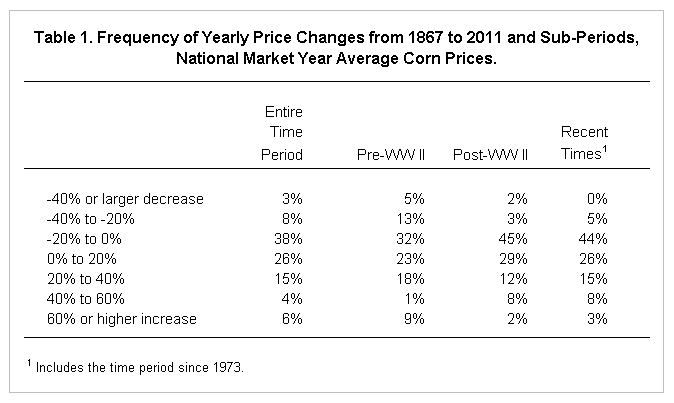 Use of longer run price series when evaluating price variability suggests that corn prices are more variable than use of a shorter time period. While there are good reasons to believe that the economic structure has changed leading to less variable corn prices, considering a longer-run perspective is important for three reasons:

NASS currently is estimating the 2011 MYA corn price to be $6.20 per bushel. A 40% decrease in price would result in a 2012 MYA price of $3.72 per bushel. The chance of this occurring is greater than zero, the chance that would result by examining price changes since 1973. Its chance of occurring likely is less than the 3% frequency suggested examining prices since 1866. The chance likely is close to a 1 in a 100 year event.