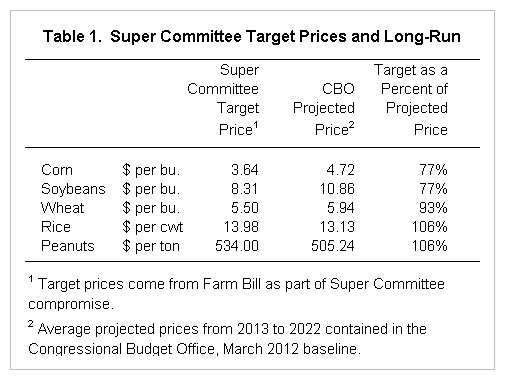 Long-run prices are approximated by prices used by the Congressional Budget Office (CBO) in there March 2012 agricultural baseline available here. Generally, these CBO projected prices are close to projected prices from USDA and other sources. Averages of yearly prices from 2013 through 2012 are $4.72 per bushel for corn, $10.86 per bushel for soybeans, $5.94 per bushel for wheat, $13.13 per hundredweight for rice, and $505.24 per ton for peanuts (see Table 1). Actual prices will vary around these long-run prices. For example, the $4.72 per bushel price for corn would indicate that the likely average price for corn between 2013 and 2022. Some years the price will be above $4.72 and some years below $4.72, but the average for the 2012-2022 period likely is close to $4.72.

Frequency and Timing of Payments

As can be seen in Figure 1, a program having a target price that is 77% of the long-run average would have made payments in four years: 1986, 1999, 2000, and 2009. These four years represent 11 percent of the years. The first three of these years would have been period of financial stress. However, 2009 generally is not recognized as a financial stressful year for corn producers.

Similar analyses for soybeans, wheat, rice, and peanuts are respectively shown in Figures 2 through 5. Summary comments are:

Having a target price that is 77 percent of long-run price results in payments in two years. This represents a payment in 5 percent of the years.

Having a target price that is 93 percent of long-run price results in payments in twelve years. This represents a payment in 32 percent of the years.

Having a target price that is 106 percent of long-run price results in payments in 23 years. This represents a payment in 62 percent of the years.

Having a target price that is 106 percent of long-run price results in payments in 20 years. This represents a payment in 54 percent of the years. 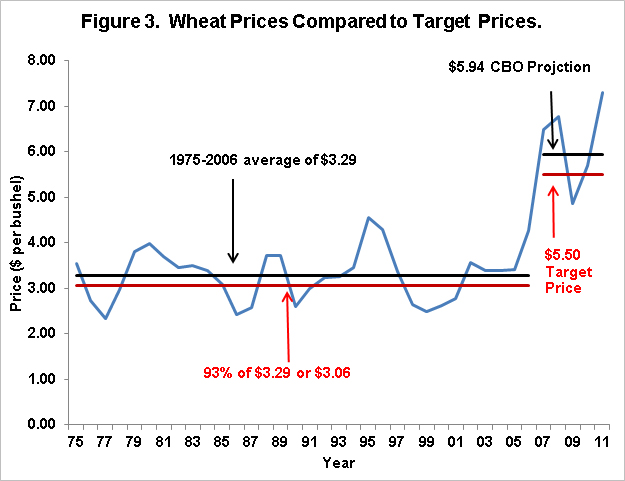 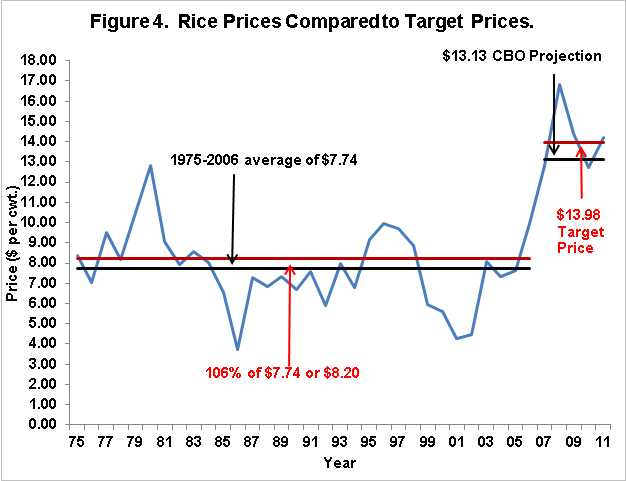 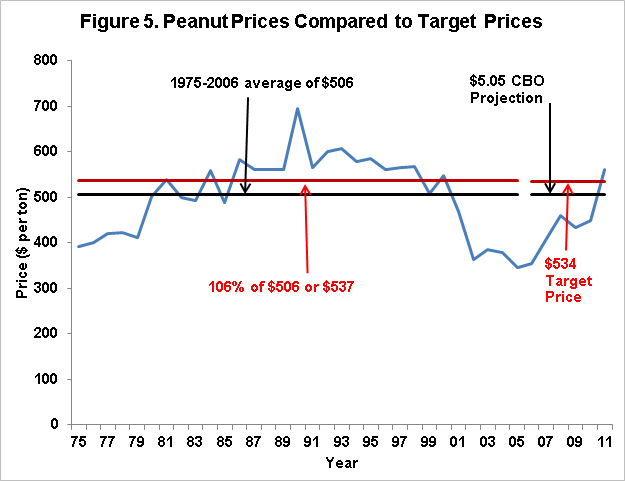 As illustrated with corn payments, a target price does not necessarily make payments in years in which financial stress is occurring. A target price program does not include yields in its calculations. Hence, revenues may not be down in years when prices are low and vice versa.

The above analysis assumed we could accurately predict future long-run prices. While the CBO prices used in the above projections generally are within the consensus, conditions can change that will change estimates of long-run prices. This presents issues when attempting to pick a fixed target price given that structural changes may occur in agriculture.