Recent discussions over the farm safety net have focused on the need for price protection. This article examines the price protection provided by a 5-year Olympic moving average of price. A specific focus is its performance during the price decline of the late 1990s, the last multiple-year period of low prices experienced by the U.S. crop sector.

An Olympic average removes the high and low values in calculating the average. To illustrate, the marketing year average price for U.S. corn over the last 5 years are:

Price protection payments could be determined in many ways but a simple method is to set the payment equal to the following: [(coverage rate times 5-year Olympic moving average for a crop year minus the crop year’s price)]. A coverage rate of 89% is used in this analysis. This rate is used by the Agricultural Risk Coverage (ARC) program, but this study does not investigate the ARC program. ARC is a revenue (price times yield) program, not a price program. ARC is a county and farm program. This analysis is for the U.S. ARC has a lower bound of 79% on its coverage range. This analysis does not have a lower bound, thus all shortfalls in price are covered. Payment rates other than 89% also were examined. While the size of payments varied with the payment rate, the distribution of payments among the 6 crops varied relatively little with the different coverage rates.

Figures 1 through 6 present the time path of prices and 89% of the 5-year Olympic moving average over the 1992 through 2002 crop marketing years for corn, upland cotton, rice, sorghum, soybeans, and wheat. The price decline began with the Asian Financial Crisis in the fall of 1997. Price for all 6 crops was lower in 1997 than in 1996 and declined more in 1998 and 1999. Prices were improving for most, but not all, of the crops by the 2002 crop year. The reason for starting with the 1992 crop year is that the calculation window for the 5-year Olympic average for the 1997 crop year is the 1992-1996 crop years.

Even though prices were declining, a combination of high prices in 1995 and 1996 and eliminating the low price meant the 5-year Olympic moving average continued to increase through 1998 and changed relatively little for 1999. Removing the low value slows the decline of an Olympic moving average during times of declining prices, thus extending the period of assistance.

The issue of program equity across crops has been raised. A common method used to allow comparisons across crops measured in different units is to compute a ratio. Specifically in this analysis, the price protection payment for a year is divided by 89% of that year’s 5-year Olympic moving average. The average of these ratios over the 1997 through 2001 period of years is presented in Figure 7 for the 6 crops examined in this article. This ratio ranged from 7.8% for sorghum and 8.7% for corn to 16.9% for upland cotton and 20.3% for rice. Thus, during the low price period of the late 1990s, the two southern crops had the highest relative price protection payments from an Olympic moving average with an 89% coverage rate.

Because any single event is likely to affect individual crops differently, it also is useful to calculate an estimate of average payment over a longer period. Thus, the average ratio of price protection payment to 89% of the 5-year Olympic moving average was calculated for all crop years from 1978 through 2011. These averages are presented in Figure 8. The range across crops is smaller, ranging from 2.3% for soybeans to 6.3% for rice. It is not surprising that rice has the highest ratio. Because yield is less variable for rice than for the other crops, adjustments to price are relatively more important than adjustments in quantity for rice than for the other crops. Hence, a price protection program should make relatively more payments to rice. Given the range in production and agro-climate characteristics of the 5 other crops, the tight distribution among them was surprising: the range was from 2.3% for soybeans to 3.1% for sorghum. A tight range is consistent with similar price protection payments across crops.

A 5-year Olympic moving average with an 89% coverage rate would have provided sizable price protection to U.S. crop producers during the low price period of the late 1990s, the last multiple-year low price period for U.S. crop producers. In particular, price protection payments averaged over 15% of the Olympic average price for cotton and rice over the 1997-2001 crop years. Moreover, since 1978, a 5-year Olympic average with an 89% coverage level would have provided more protection for rice than the other 5 crops examined in this article, and would have provided approximately the same level of price protection for the 5 other crops. The 5-year moving average does move lower over time to reflect lower prices, so it provides assistance only for a limited period of time. But, the size of this assistance can be notable, providing a meaningful cushion to make adjustments needed to survive over the long term.

This publication is also available at: http://aede.osu.edu/publications. 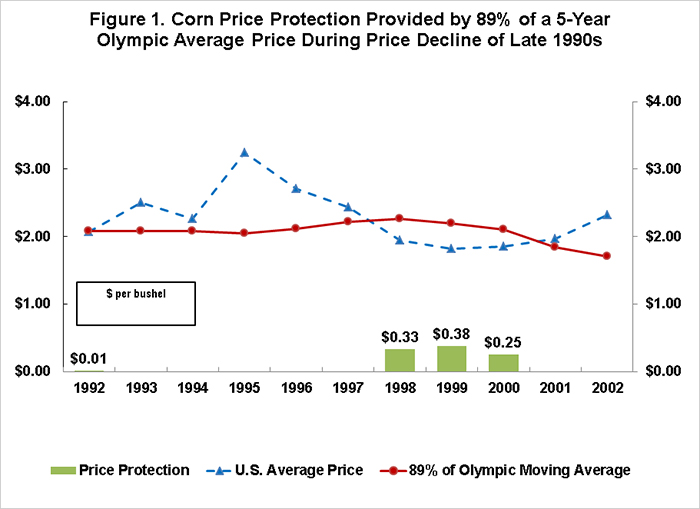 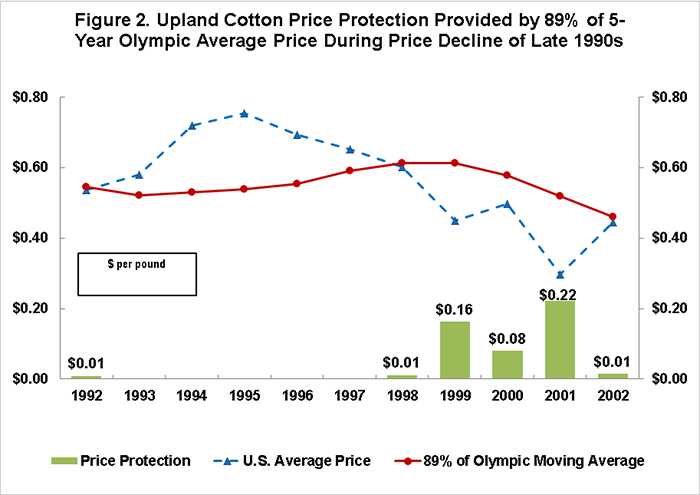 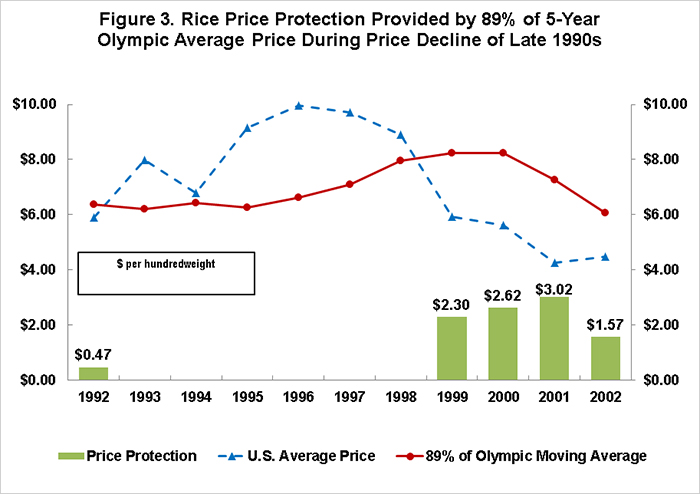 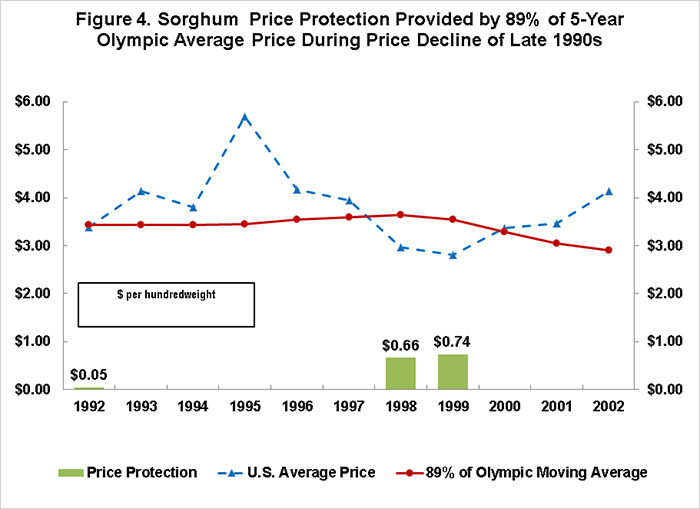 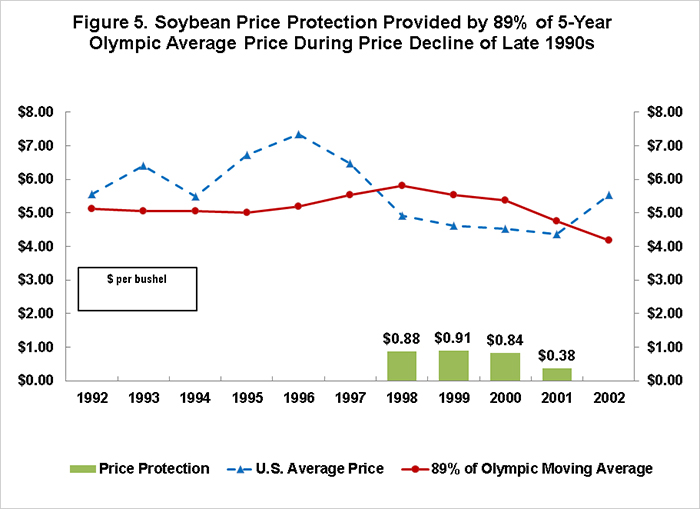 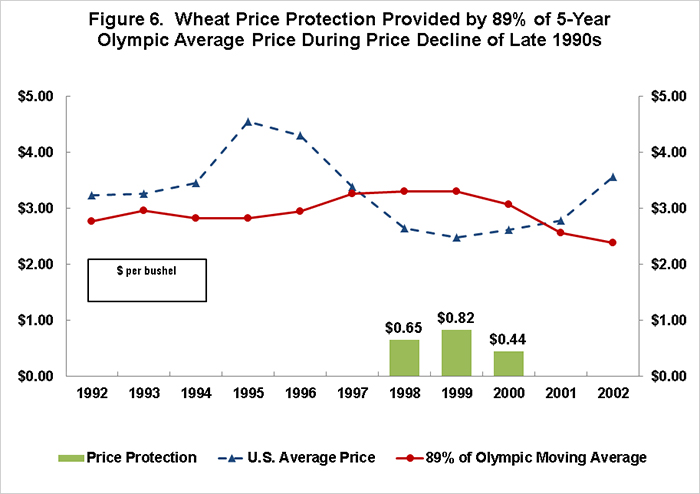 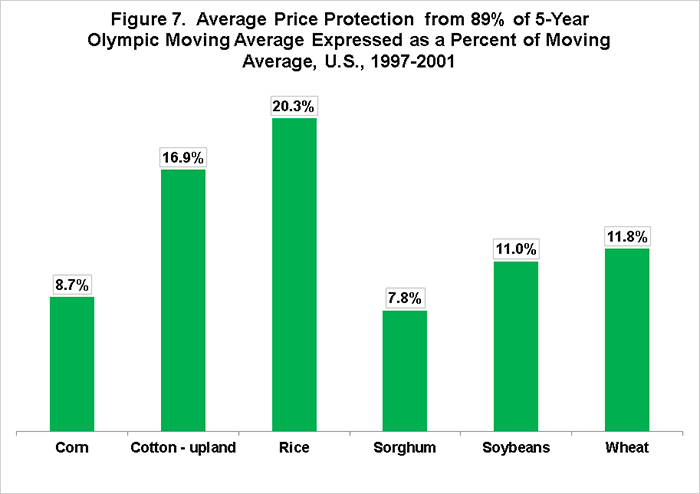 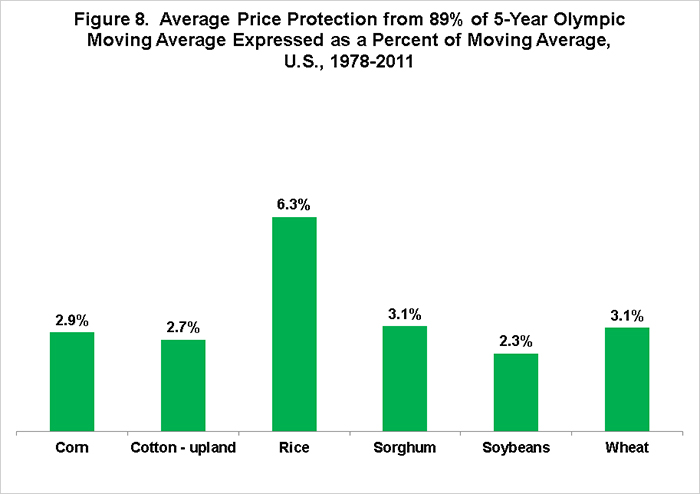