The Senate passed their version of the 2012 Farm Bill on June 21, 2012 (summaries available here, here, and here). On July 5 Representative Frank Lucas, Chairman of the House of Representatives Committee on Agriculture released a draft of the Federal Agriculture Reform and Risk Management Act of 2012 which was passed by the House Ag Committee on July 11, 2012 (summary of draft available here). Both the Senate and House Committee versions of the 2012 Farm Bill have been scored by the Congressional Budget Office (CBO) to achieve significant savings – more than $23 billion for the Senate version and more than $35 billion for the House Committee bill over the 10 fiscal years from 2013 through 2022.

It is important to point out that the savings or additional spending levels presented and discussed in this post are based on CBO projections for the Senate and House versions of the 2012 Farm Bill relative to their March 2012 baseline projections for existing programs. In other words, they represent changes in spending relative to if the 2008 Farm Bill programs were to continue unmodified through the next 10 fiscal years (2013-2022) based on baseline projections for commodity price levels, supply, and demand in these future periods.

The aggregate savings are largely reached in both pieces of legislation through major cuts and modifications to programs in the Commodity, Conservation, and Nutrition Titles. All other Titles in both bills have been scored as having increased spending levels with additional spending the most notable in the Crop Insurance Title. Figure 1 illustrates the projected savings or additional spending across various titles in both the Senate and House versions. 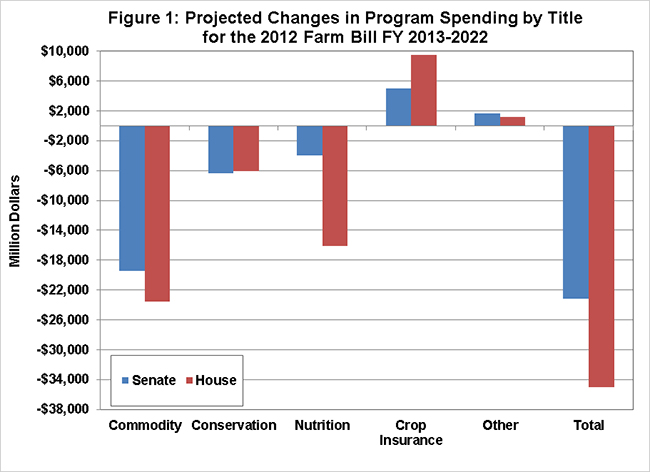 Projected savings in the Commodity, Nutrition, and Conservation Titles total nearly $30 billion in the Senate bill and $45.7 billion in the House draft through FY 2022. Spending on programs in the Crop Insurance Title is projected to be more than $5 billion above the baseline in the Senate bill and $9.5 billion above baseline in the House Committee bill over the next 10 fiscal years. Changes in other areas, which include the Rural Development, Research and Extension, Forestry, Energy, Horticulture, and Miscellaneous Titles, are projected to result in $1.6 and $1.1 billion in additional spending relative to the baseline for the Senate and House versions, respectively.

Allocation of Spending Cuts Across the Commodity, Nutrition, and Conservation Titles

Figures 2 and 3 illustrate how the savings due to changes in the Commodity, Nutrition, and Conservation Titles are allocated across the individual areas in the Senate bill and House Committee bill, respectively. In the Senate bill, 65% of the savings are in commodity programs, 21% in conservation, and 13% in nutrition. Savings in the House Committee bill are distributed as: 52% from commodity programs, 13% from conservation, and 35% from nutrition. 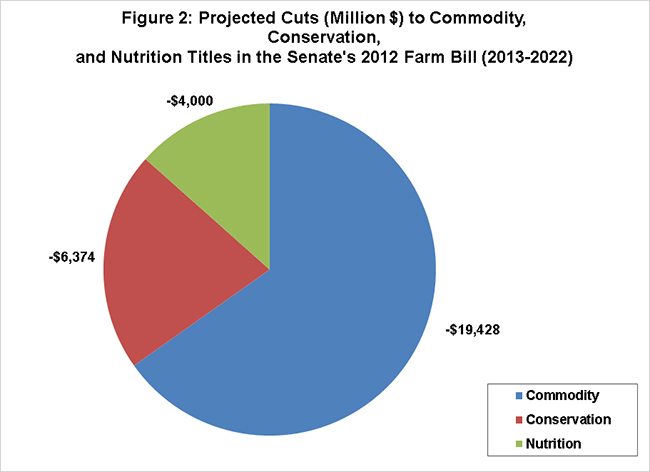 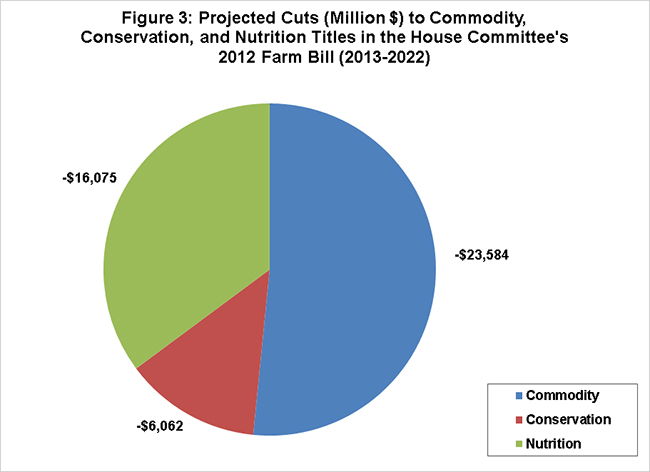 More than $50 billion in Commodity title savings through FY 2022 result from the repeal of the Direct Payment, Counter-cyclical, and ACRE programs. These programs are replaced by the Ag Risk Coverage (ARC) program in the Senate bill ($28.5 billion) and the Revenue Loss Coverage (RLC) or Price Loss Coverage (PLC) options in the House version ($24.5 billion). The larger savings credited to Commodity programs in the House version are primarily due to the lower cost of the RLC/PLC program option relative to the Senate’s ARC program. Modifications to dairy programs in both versions result in spending cuts, while disaster assistance and other commodity programs were scored to have slightly increased spending relative to the current baseline.

Table 1 compares projected spending levels for Commodity Title programs for selected commodities under the baseline and Senate and House Committee Farm Bills. In general, support levels are projected to decline for most commodities. Exceptions include a projected 17% increase in program support for soybeans in the Senate Farm Bill, and an 18% increase for peanuts in the House Committee version. Note that support for cotton is reported in table 1 both with and without the STAX crop insurance program. 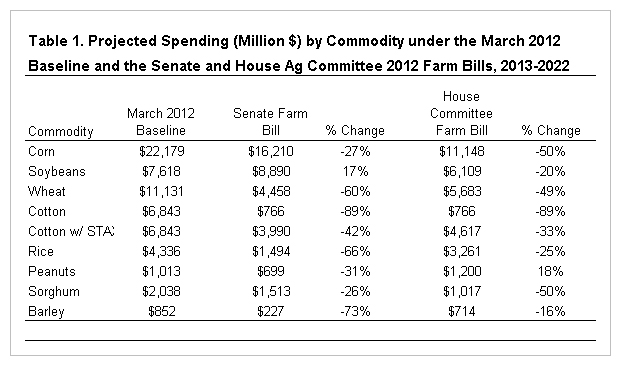 Savings of $4.5 billion in the Nutrition title are achieved through cuts in utility allowances in both the Senate and House versions. In the House Committee bill, modifications and updates to nutrition program eligibility requirements were scored to result in an additional $11.5 billion in savings through 2022. These latter cuts account for more than 70% of the savings in the Nutrition Title and nearly 1/3 of the total savings projected for the House Committee Bill, and is an area over which there exists significant political debate.

Both the Senate passed and House draft versions of the 2012 Farm Bill are credited with significant savings relative to existing programs over the 2013 to 2022 fiscal years. These savings are achieved through a major overhaul to farm commodity programs and cuts in the Conservation and Nutrition Titles. The version passed by the House Ag Committee is credited with achieving much larger total savings ($35 billion vs. $23.5 billion) mainly through deeper cuts to Nutrition and Commodity programs despite a larger increase in spending due to changes in the Crop Insurance Title. The differences in spending on nutrition programs is likely to be a point of major disagreement as the 2012 Farm Bill process moves forward. How this difference is compromised may well impact the final structure of cuts and spending on other titles and individual programs.