On July 5, 2012, the U.S. House Committee on Agriculture released a discussion draft of the 2012 Farm Bill. The Bill’s title is the Federal Agriculture Reform and Risk Management Act (FARRM). This article summarizes provisions in FARRM that concern the safety net for U.S. crops: The provisions are in Title I, Commodities and Title XI, Crop Insurance. The article also compares FARRM with the 2012 Farm Bill recently passed by the U.S. Senate. An overview of the crop safety net in the Senate Farm Bill is provided in “First Draft of New Senate Farm Bill” by Carl Zulauf, available here, with updates on the Bill as passed by the Senate Committee on Agriculture, Nutrition, and Forestry and the full Senate available here and here, respectively. Note this article is divided into 3 self-contained sections. Each section has its own summary and therefore there is no closing summary. Also note that many provisions contained in the crop safety net provisions of the Farm Bills are not discussed in this article.

►It is important to first note that considerable agreement exists among the House Discussion Bill and the Senate Pass Farm Bill.

►A major difference is that the House Discussion Bill replaces the farm revenue program option in the Senate Bill with a price counter-cyclical program for which fixed minimum support prices have been increased, yields can be updated to 2008-2012, and current planted, not historical base, acres are used (Table 1). 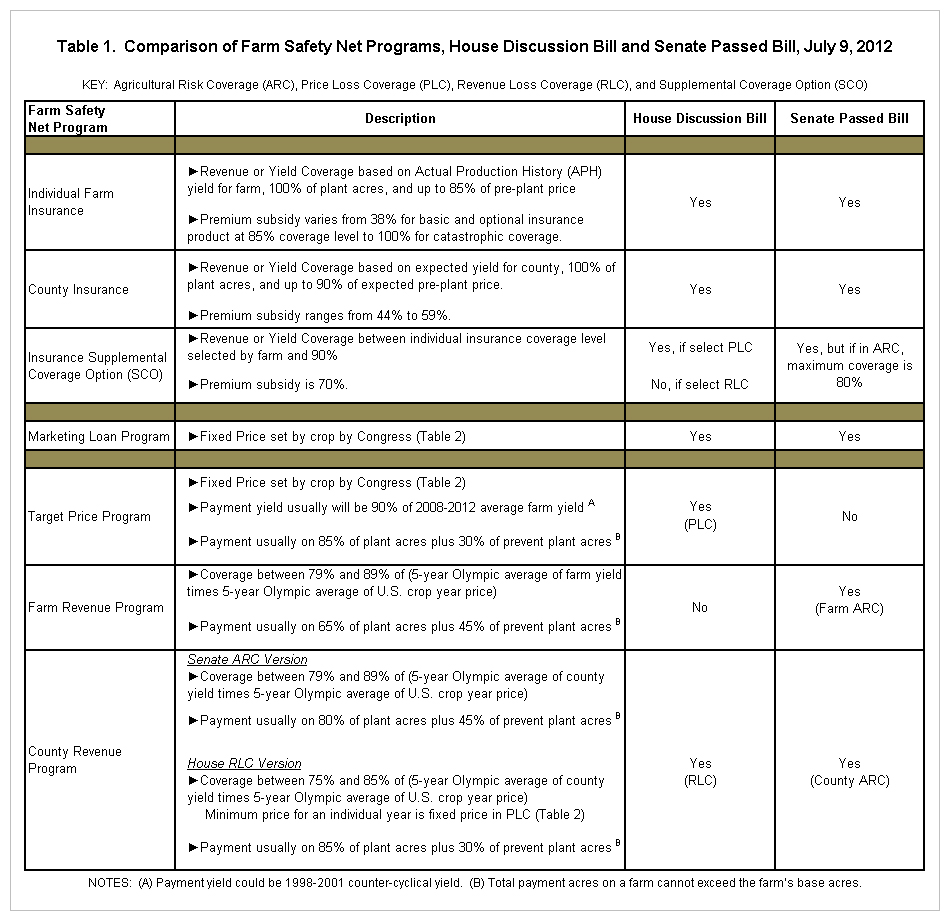 ►Farms are given a one-time choice between PLC and RLC. PLC is the default choice; thus, a farm will need to actively request RLC. The decision is made separately for each crop. While a detailed analysis that incorporates all parameters of the two programs is needed to assess this choice, the following is offered as an initial set of thoughts concerning this decision.

(1) Since RLC coverage starts at 85% of a 5-year Olympic Moving Average, RLC is, in general, currently more favorable for crops with a ratio in Figure 1 that is less than 85%. These crops are corn, soybeans, and oats. Note this assessment could change if prices decrease, especially if the decline is notable, over the 2012-2017 crop years covered by the 2012 Farm Bill.

(3) Yields are updated annually for RLC. In contrast, yields are not updated for PLC. Note this consideration may not end up favoring RLC over PLC if yields decline over the period of the 2012 Farm Bill.

(1) Since RLC coverage starts at 85% of a 5-year Olympic Moving Average, PLC is currently more favorable for crops with a ratio in Figure 1 that exceeds 85%. These crops are peanuts, barley, and rice. Note this assessment could change if prices increase over the 2012-2017 crop years covered by the 2012 Farm Bill.

(4) PLC is the default choice. The default option is often appealing because there are no transaction and thinking costs. These costs are especially important when it is not clear that any choice is superior.

►A quick assessment suggests it will be difficult to devise rules for choosing between PLC and RLC. Moreover, it is impossible to forecast whether PLC or RLC will end up providing the most payments. The end result will depend on how much yields increase and how prices change over the next 5 years. Nevertheless, 2 observations are possible.

The insurance provisions in the House Discussion Bill and Senate Passed Bill generally are the same, including many provisions not in the table below. A key difference is that the House Bill contains a minimum price for upland cotton in STAX. 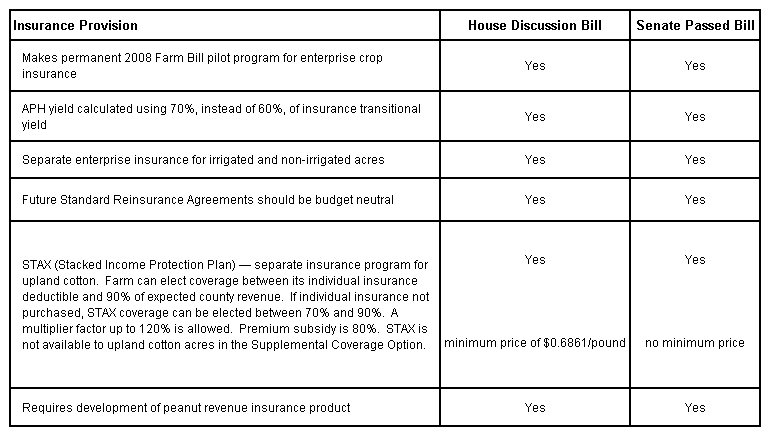 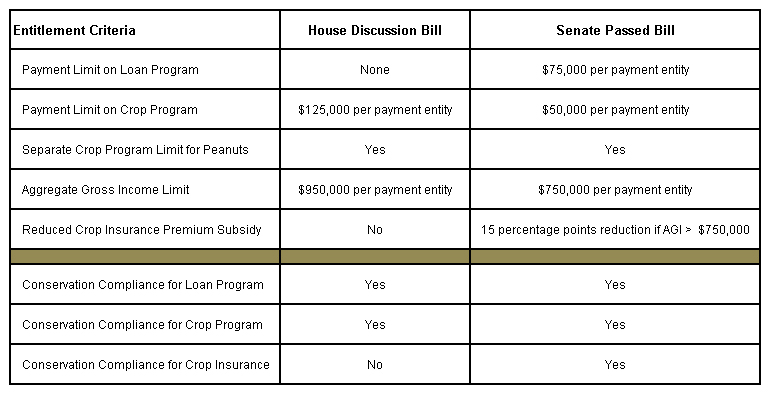