In a recent post (July 13, 2012), we examined the U.S. supply/demand situation for corn in 2012-13 under various yield scenarios. This analysis focused on the demand rationing that would be required as yields declined. If yield turns out to be above 140 we concluded that prices at the time appeared to be sufficient, and perhaps more than sufficient, to ration usage. However, we argued that an average yield of 135 bushels or less would require substantial further rationing, resulting in record high average prices. It is clear that corn yield prospects have continued to decline in the last two weeks as drought conditions this summer have become as bad as 1988 and perhaps worse, potentially only rivaled in the last century by 1936.

If further rationing is required, a key question is the price of corn that will force ethanol plants to throttle back production or shutdown completely. While ethanol plants in recent weeks have cut production relative to year ago levels, under corn yield scenarios less than 135 bushels further cuts will be required (absent draconian reductions in exports and/or domestic feed use). As highlighted in another recent post, the “shutdown” level of an ethanol plant is simply the point where revenue no longer covers the variable cost of production. Continuing production beyond this point only adds to the losses incurred via fixed costs. The shutdown point can be reached due to adverse movements in either output or input prices, or some combination of both. Since corn (an input) is the variable of interest here, we want to figure out the price of corn that just equates total variable costs, given other variable costs and revenue from ethanol production. We continue to use the same model of an Iowa ethanol plant introduced here. This model is meant to be representative of an “average” ethanol plant constructed in the last five years. As always, it should be kept in mind that there is substantial variation in capacity and production efficiency across the industry.

Figure 1 presents the weekly maximum bid (shutdown) price of corn for the representative Iowa ethanol plant starting on January 27, 2007 and updated with data through last Friday, July 20, 2012. For most of 2012 the shutdown price moved in a fairly narrow range between about $6.50 and $7.00 per bushel. In recent weeks the shutdown price has skyrocketed, increasing over $2 per bushel to $9.06 last Friday. The market price of corn, just above $8 per bushel, has not kept pace with the surge in the shutdown price. This means that corn prices will have to go much higher than present levels if further reductions in ethanol production are required for the upcoming marketing year. 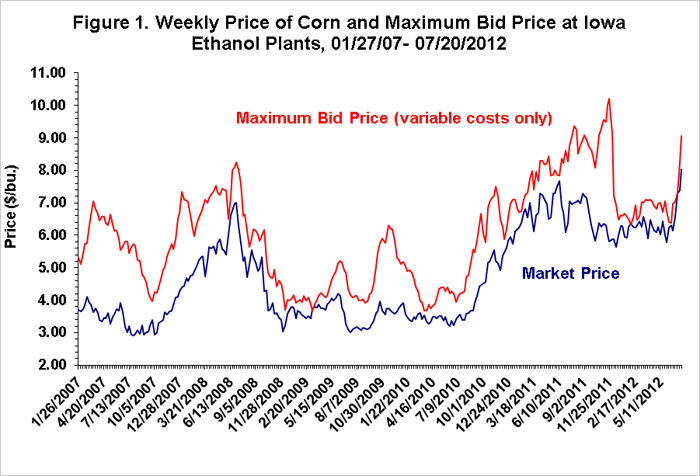 What’s behind the recent run-up in the shutdown price of corn for ethanol plants? The answer is simple–rising ethanol prices–since we are fixing other variable costs and “backing out” the price of corn that equals all of the processing revenue less these other variable costs. Figure 2 shows that ethanol prices have followed the sharp rally in corn prices in recent weeks. In fact, ethanol prices have increased more (+32%) than corn prices (+27%) since June 15th. This has been sufficient to restore a small level of profits (after variable and fixed costs) to ethanol plants. 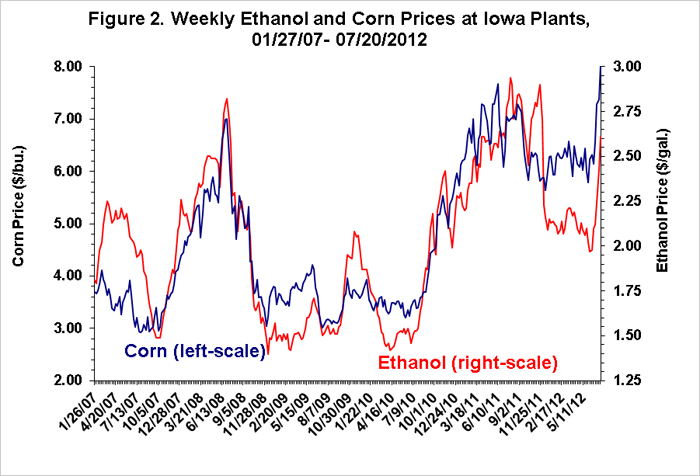 With expectations continuing to slide for U.S. corn yields this summer, issues related to rationing usage in 2012-13 are taking center stage. How the available supply of corn may be rationed is much more complex than in the past due to the rise of the ethanol industry. As recent observations attest, pricing behavior in the ethanol-gasoline blending market will be very important to determining how any rationing is allocated across the fuel and feed components of the corn balance sheet. What we know at the present time is that, if necessary, ethanol plants can bid the price of corn to record levels.