2012 Perspective as of August

To calculate its revenue guarantee, crop insurance uses the average December corn futures price and average November soybean futures price during the month of February, which will subsequently be referred to as planting. For 2012, these prices are $5.68 per bushel for corn and $12.55 per bushel for soybeans (see Table 1). On August 28, 2012; December corn futures closed at $7.95 and November soybeans futures closed at $17.22. 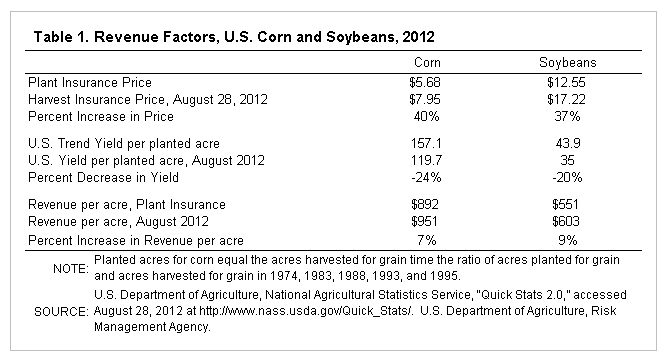 Using these prices and yields, revenue per planted acre expected at planting was $89277 for corn ($5.68 times 157.1) and $551 for soybeans ($12.55 times 43.9). In comparison, the revenue in August is $951 for corn ($7.95 times 119.7) and $603 for soybeans ($17.22 times 35.0). Thus, for both the average U.S. corn acre and the average U.S. soybean acre, revenue is 7% and 9%, respectively, higher in August than at planting. In other words, for the average U.S. acre of corn and soybeans, the higher price resulting from the drought has more than offset the decline in yield resulting from the drought. However, there are many farms (acres) that have lower revenue due a yield loss that is greater than the average U.S. yield loss. Note that this analysis assumes a zero basis between the cash and futures price and no forward pricing of corn and soybeans.

It is important to call attention to the 1984 observation for soybeans because, unlike the other observations in this article, the decline in revenue (-22%) exceeded the decline in yield (-9%). Thus, exceptions exist to the general storyline discussed in the previous paragraphs.

Given the increase in corn and soybeans futures prices since planting as well as a zero futures-cash basis and no forward contracting, August revenue is less than the revenue expected at planting if the August yield is lower than 75% of trend yield (see Figures 1 and 2). In other words, August revenue is lower if yield has declined by more than 25% relative to trend yield. On the other hand, if the August yield is 75% or more of trend yield, August revenue is higher than the revenue expected at planting. Figures 1 and 2 underscore the importance of the individual farm’s yield in assessing a farm’s revenue situation as of August 2012. 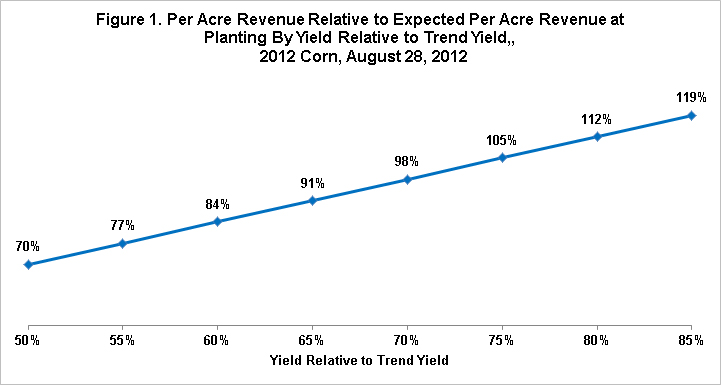 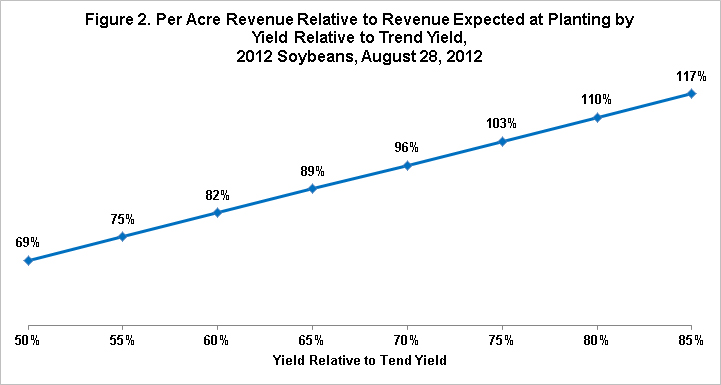 These two figures also provide another insight. Assuming that trend yield is the farm’s insurance yield, the harvest price option was purchased, and the August 28 price is the harvest price option; the x-axis become the insurance coverage level and the numbers in the figures become the minimum revenue a farm has relative to the expected revenue at planting for a given insurance coverage level. For example, as of August 28, if a farm has at least 75% insurance coverage and no forward contracting, crop insurance will guarantee a per acre revenue that exceeds the per acre revenue expected at planting. The minimum will hold regardless of how low the yield is on the farm, including a zero yield. The reason is that all production, whatever its size, and all insurance payments, whatever its size, is made at the August 28 price because of assuming the harvest price option and no forward contracting. Stated somewhat differently, a farm that has insurance with the harvest price option must have a coverage level that is less than 75% for its revenue on August 28 to be less than the revenue it expected at planting. Again, these statements assume no forward contracting, a zero cash-futures basis, and insurance yield equal to trend yield. It is worth noting that the last assumption is more likely to be valid in 2012 than in previous years because of the availability of the trend-adjusted yield option.

To put this discussion in perspective, data from the Risk Management Agency for 2011 reveals that 85% of planted corn and soybeans acres were covered by crop insurance. Moreover, 50% of corn planted acres and 48% of soybean planted acres were insured at coverage levels of 75% or more.

While the preceding analysis is simple and does not capture all of the interacting factors that happen at the farm level, it suggests that a national drought does not necessarily result in lower revenue for U.S. corn and soybean farms as a group relative to the revenue they expected when the crop was planted. The reason is that the decline in yield can be sector wide, or systemic to use the economic term. Thus, price increases, offsetting some, maybe all, and maybe more than all, of the average decline in yield. It is important to underscore that this statement holds even if insurance does not exist and that it does not hold for all farms, notably those with yield declines greater than average yield decline for the U.S. as a whole.

The availability of the harvest price option in crop insurance further means that, depending on the size of the increase in price, and assuming that a high enough insurance coverage level was purchased, a farm may have minimum revenue at harvest that exceeds the revenue expected when the crop was planted no matter what yield is, including zero. Given the more than 35% increase in corn and soybean insurance price that currently has occurred, this situation appears likely for the 2012 drought at some of the higher insurance coverage levels.

In seeking to understand why this issue has arisen, it is important to first point out that a primary reason historically cited for consumer and taxpayer support of farm programs is an assured supply of food. Crop insurance can be viewed as furthering this goal by offering farms protection against the risk of production or revenue declines. However, when farms decide to purchase insurance, they in essence are saying that they are willing to produce the crop for the planting insurance price. Hence, the planting insurance price, not the harvest insurance price, aligns with the historical U.S. policy concern regarding an assured supply of food.

The decision on whether the harvest price option should be subsidized will come down to answering the question, what is fair and appropriate policy. This is never an easy determination. As a guide that might be of use, I have always found it worthwhile to switch places and ask, if I was taxpayer who was not a farmer, how would I feel about the policy? And, if I was both a farmer and a taxpayer, how would I feel about the policy?