The drought conditions experienced in 2012 have raised concerns over rationing corn usage for the remainder of the 2011/12 and into the 2012/13 marketing years (see the recent post from Scott Irwin and Darrel Good here). Of particular interest is how this might impact ethanol producers and obligated parties in meeting the RFS2 mandates in 2013 with corn-based ethanol.

In March, I provided an analysis of the likely stock of Renewable Identification Numbers (RINs) which had been banked by obligated parties over the past three years through the banking provision outlined in the RFS2 (post available here). The numbers indicated a potential stock level of approximately 2.5 billion gallon RINs which could be applied towards the mandate, reducing the revealed demand for corn-for-ethanol by as much as 900 million bushels if conditions arose which negatively impacted the economics of ethanol blending. The drought and resulting short corn crop may in fact lead to such conditions (ethanol prices near or above gasoline prices). For example, rising corn prices have already led to reports of ethanol plants shutting down in late June (see Morningstar article here as an example), and recent weekly ethanol outlook reports indicate reduced industry wide production levels (see CME Group outlook reports here and here).

Table 1 below provides an update of current RIN stock estimates using ethanol production and export data available from the Energy Information Administration (EIA) through March 2012. Thanks to clarifications provided by Seth Meyer, Food and Agriculture Organization of the United Nations, two corrections are made relative to the estimates provided in the March post. First, the 20% limit on banking or rollover across years should be applied to the following year’s mandate rather than the mandate in the year during which the RINs were generated. For example, up to 20% of the 2012 mandate can be met with RINs generated in 2011.1 Second, only exports are considered in the stock flow calculation each year, whereas the March estimates used net trade (exports – imports). Since virtually all ethanol imported to the U.S. is sugar-cane or cellulosic ethanol, the RINs generated on these imports would be used toward the advanced component of the RFS2 mandate.

Our current estimate of RIN stocks available for application to the non-advanced portion of the 2012 mandate is 2,640 million gallons. Since the non-advanced portion of the mandate – 13.2 and 13.8 billion gallons in 2012 and 2013, respectively – can be met with corn ethanol, this translates to approximately 960 million bushels of flexibility in corn-for-ethanol demand assuming an ethanol yield rate of 2.75 gallons per bushel.

Expectations for a short corn crop and the resulting potential for binding mandate conditions in 2013 have begun to be reflected in the ethanol RINs market. Figure 1 reports 2012 U.S. ethanol RINs prices (blue series, values on the left axis). Ethanol RIN values generally declined through the first six months of the year, reaching a low of $0.01/gallon in mid-June. RIN prices have increased significantly throughout July, with a high price of $0.0465/gallon reported on July 19th, 2012. While RINs prices have been rising at a rapid rate, it is important to keep in mind that the level is still relatively low. Pricing relationships that govern blending profitability will have to turn much more negative before RINs prices increase to substantially higher levels. Daily settlement prices for the December 2012 corn futures contract are also provided in figure 1 (red series, values on the right axis), with the increase in corn prices beginning in mid-June corresponding to the run up in ethanol RIN values. 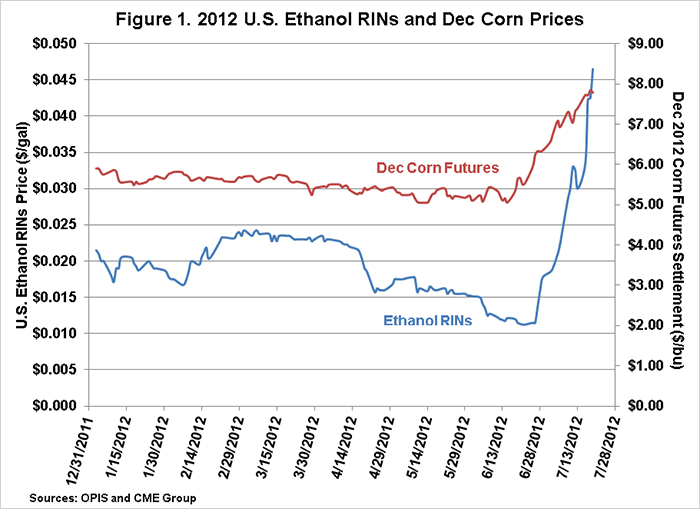 Given the drought conditions experienced throughout the country and the resulting expectations for a short corn crop in 2012, meeting the non-advanced portion of the RFS2 mandates over the next few years may require use of the RIN stocks estimated to have been accumulated via the RFS2 banking provisions since 2007. Current estimates of RIN stock levels would allow for more than 900 million bushels of flexibility in the use of corn-for-ethanol over the coming marketing year. The greater likelihood of binding mandate conditions has begun to be reflected in the ethanol RIN market as prices for RINs generated in 2012 have increased at a rapid rate since mid-June. If the necessary market conditions are present (ethanol prices near or above gasoline prices), the RFS2 mandate may be met through use of available RIN stocks in the coming marketing year, and further increases in RIN values and market volatility can be expected.

This underscores the important impact that the banking provision of the RFS2 may have in meeting the non-advanced component of the mandate over the next few years, and also the importance of the need to address the seemingly opposing policies of the RFS2 mandate levels and the current blend limitations on ethanol. This is especially true when the advanced components (cellulosic and other advanced ethanol) of the mandate are considered. Unless projected gasoline consumption increases or higher blend levels are approved and effectively penetrate the market, waivers from the EPA may be required for even the non-advanced component of the RFS2 mandate.

1Note that for the estimates in this post we assume the 20% cap on banking of ethanol RINs is applied to the non-advanced portion of the mandate rather than the total mandate (13.2 billion gallons vs. 15.2 billion gallons in 2012). While the EPA regulations could be interpreted as the banking cap applying towards the total mandate, discussions with EPA staff suggest the cap on banking RINs generated from corn-based ethanol would be applied to the non-advanced portion. Use of the total mandate in applying the banking limit would result in a larger estimate for 2011 RIN stocks (up to 2.9 billion gallons – the equivalent of more than 1 billion bushels of corn).