Low yields in 2012 will reduce 2013 APH yields on many farms. However, there are two factors that could potentially reduce the size of the APH yield declines. 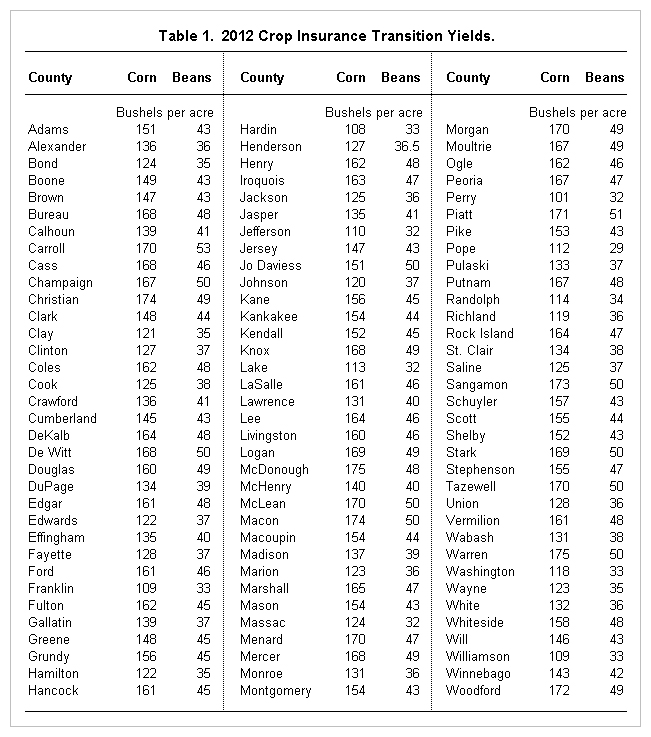 Take a McLean County farm with a 10-year yield history where the historic yields exactly equal the county averages in each year. This farm would have a 2012 APH yield of 175 bushels per acre. If this farm has a yield below 104.4 bushel yield in 2012, a 104.4 bushels yield could be used in the APH yield calculation, resulting in an a 2013 APH yield of 169 bushels per acre. This farm’s APH will decline by 6 bushels between 2012 and 2013. Using a lower actual yield than 60% of the t yield would result in more an APH yield decrease.

While APH yields will decline, the Trend-Adjustment Endorsement will be available in 2013. This endorsement will act to increase yields used in guarantee calculations in the recognition that average corn and soybeans yields have increased over time.

Crop insurance premiums in 2013 are not likely to be impacted by poor 2012 yields. Rates for 2013 are set before complete 2012 yield and loss information is known. Even in 2014, when 2012 losses will impact premiums, premium increases may not be large because a weather indexing process is used in setting premium. Because 2012 is an unusual year, 2012 losses will not receive as much weight as more typical years in setting crop insurance premiums.

APH yields on many farms will decrease as a result of the 2012 drought. However, there are limits on the decrease that can occur because of potential yield substitutions and APH yield decline limits. Still, the low yields in 2012 will serve to drag down APH yields for the coming 10 years on most farms. Premiums in 2013 likely will not increase because of the 2012 drought.