Companies shares of underwriting losses have been revised from an earlier version.

There is growing interest in understanding the magnitude of losses in the Federal crop insurance program, and how those losses are to be shared between the Federal government and the crop insurance companies and their reinsurers. At this point, it is difficult to precisely estimate the size of the eventual losses; however, it is safe to assume that losses will be relatively large. Given Federal regulation and restrictions on crop insurance companies’ retained exposure, it is highly likely that there are sufficient funds to cover 2012 losses. Additional context and perspective on 2012 losses are provided below. 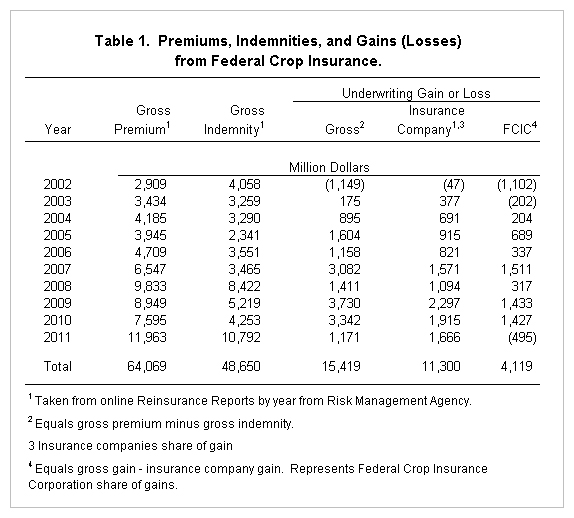 The size of the crop insurance program has grown over time. Gross premium was $2.909 billion in 2002, increasing to $11.963 billion in 2011 (see Table 1). A number of explanations help to understand the increase. There have been changes to the crop insurance program such as the introduction of higher subsidies for enterprise units, a unit that insures all of one crop in a county. Since this introduction, farmers have shifted to enterprise units while at the same time increasing coverage level. There also has been an increase in commodity prices in 2006, which results in higher value of crop, which in turn leads to higher premium. In addition, and perhaps most importantly, farmers perceive higher risk in agriculture due to rising input costs, which has led to more acres insured at a higher coverage levels.

The crop insurance program has had underwriting gains each year since 2003. Over the past decade, the gross gain totaled $15.419 billion. One would expect large losses in a severe drought year like 2012, which appears to be between a one-in-twenty-five and one-in-fifty year event. Over time, underwriting gain experience will operate in this fashion: most year’s there will be gains or modest losses punctuated by a small number of years in which losses will be extremely large. The existence of large loss years is one reason for Federal involvement in crop insurance as private companies have difficulty bearing the risks of large losses that periodically occur in agriculture. 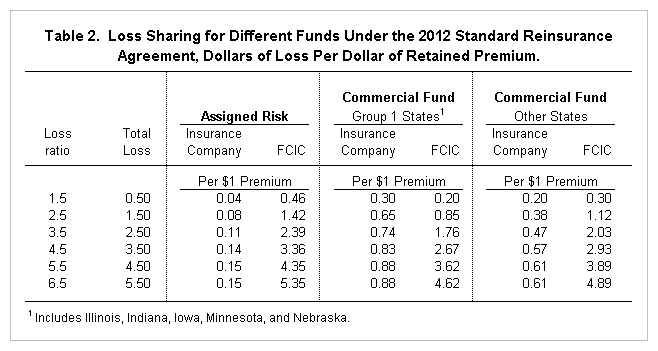 In both funds, the companies’ share of losses decreases as loss ratio increases. This declining risk feature as losses increase is meant to buffer companies from extreme loss years as is likely to occur in 2012. Besides insuring with the Federal government, private crop insurance also will insure underwriting losses with other private companies providing reinsurance. Hence, the losses that are likely to be incurred by private crop insurance companies in 2012 likely will be shared with private reinsurance companies.

It is difficult to predict what insurance losses will be for 2012. Not only do overall yields matter, which are difficult to predict, but also the distribution of yields across the nation matters. As important, the levels of harvest prices for corn and soybeans, which are set based on futures prices in the fall, will greatly influence overall losses as revenue policies’ guarantees will largely reset to the higher harvest price levels.

To develop a feel for size of loss in 2012, the following assumptions are used:

Gross underwriting losses likely will be large this year, with underwriting losses of $18 billion or more being possible. Given the nature of agriculture, these large losses from a crop insurance program of the current size and scope should be expected to occur in years like 2012.