A signature issue of the 2012 Farm Bill debate is the addition of a shallow loss program to complement existing crop insurance. Shallow loss programs are included in the farm bills passed by the U.S. Senate and the House Committee on Agriculture. Unless the policy environment changes dramatically, the main question is which version(s) of shallow loss programs will be chosen. This article describes the general approach and program specifics of the various shallow loss proposals and offers some limited, initial observations.

In the 2008 Farm Bill, Congress took another step in this evolutionary process by including the SURE program. Commonly-referred to as permanent disaster assistance, SURE required the purchase of insurance and essentially increased a farm’s insured coverage level by 15 percent. Thus, SURE addressed losses less than the insurance deductible elected by the farm. Such losses are often referred to as shallow losses. Thus, the long-term Congressional interest in losses not covered by crop insurance had evolved to a policy that addressed shallow losses.

One approach to shallow loss is to cover a fixed range of loss that is specified in the legislation and that uses prices and yields not tied to crop insurance. This approach is embodied in the Agriculture Risk Coverage (ARC) option in the Senate Bill and the Revenue Loss Coverage (RLC) option in the House Committee Bill. The range of loss covered by ARC is 79 percent to 89 percent of the revenue target while the range of loss covered by RLC is 75 percent to 85 percent of the revenue target. The majority of crop insurance has coverage levels of 75% or smaller. Thus, both loss ranges exceed the typical deductible elected by U.S. farms. Both ARC and RLC use an Olympic moving average (removes low and high value) of crop year yields and prices.

The second shallow loss approach is to allow farms to buy a modified county insurance product to cover county-wide losses that are between the coverage level elected by the individual farm and 90 percent, or anywhere in between. This is a variable coverage approach, with the farm electing the shallow loss coverage range. Moreover, prices and yields are values currently used by crop insurance county products. Both the Supplemental Coverage Option (SCO) and Stacked Income Protection Plan (STAX) use this approach. STAX is only for upland cotton. SCO and STAX are included in both the Senate Bill and the House Committee Bill.

Besides different general approaches, the shallow loss programs also differ in other parameters. Differences are to be expected at this stage of the process, in part because these are new programs. Most of the differences are presented in Table 1. A few are discussed below. 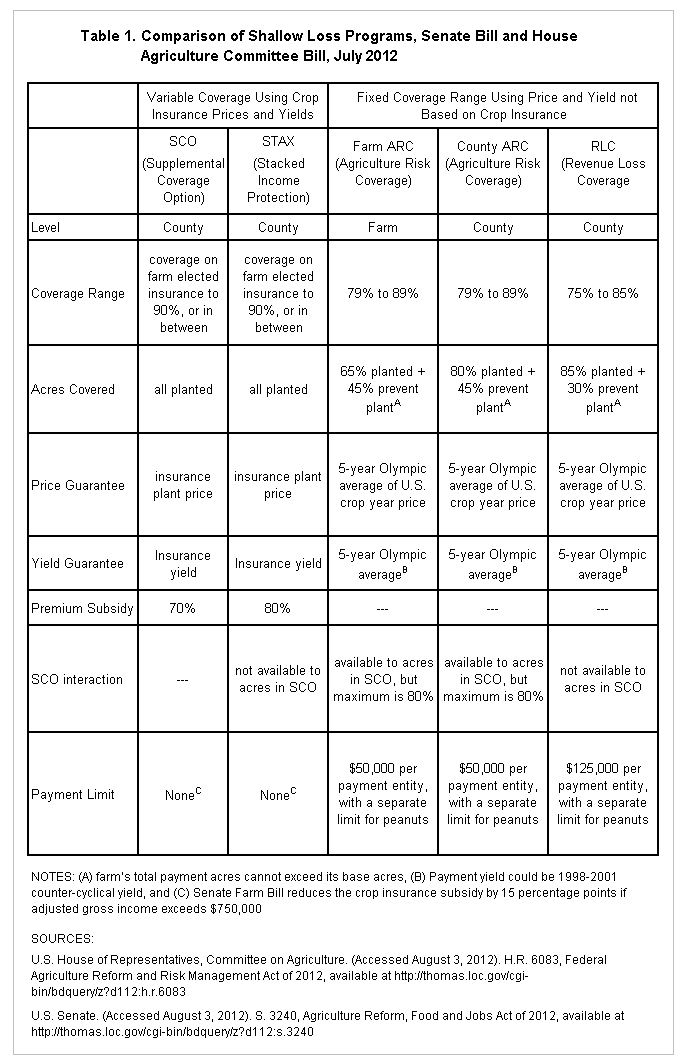 The Senate ARC program has both an individual farm and county shallow loss program. Farms would choose one of them.

Under the Senate Bill, farmers can choose to enroll in ARC or not. Either way, they can purchase SCO for some or all of their acreage but the SCO loss coverage maximum is limited to 80 percent if the farm is enrolled in ARC. Under the House Committee Bill, farmers who enroll in RLC are not eligible to purchase any coverage under SCO.

A shallow loss program will generate benefits that will differ for different areas of the U.S. This effect is illustrated using the farm level data of the Illinois and Kansas farm management associations. Revenue losses were calculated using the plant and harvest insurance prices, the 5 year average of the farm’s yield per planted acre, and planted acres. Average loss and variability of loss are notably greater for corn, soybeans, and wheat in Kansas than in Illinois (see Table 2). These differences reflect agro-climatic conditions. In particular, Kansas is subject to more weather and crop stress than Illinois. 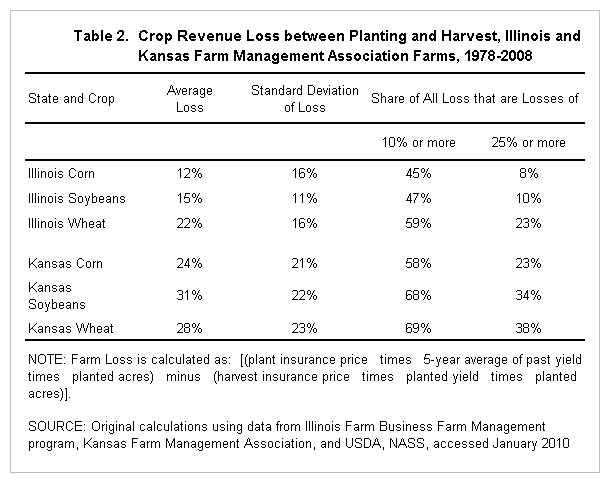 The share of losses that exceed 75%, a common level of insurance brought by farmers, is much greater in Kansas than in Illinois. For example, only 8% of losses for Illinois corn were accounted for by losses that exceeded 25% in size. The comparable number for Kansas corn was 23%. The same relative relationships exist for losses greater than 10%. The implication is that Illinois farms have more to gain from a shallow loss program than do Kansas farms because of the differences in the distribution of losses. The alternative companion observation is that the shallow loss program addresses the imbalance that current crop insurance programs provide more protection for Kansas farms than for Illinois farms.

The two approaches to coverage of shallow losses represented by ARC and RLC versus SCO and STAX are competitive in design. There is no inherent reason to have both approaches.

The overcompensation issue occurs particularly with ARC and RLC which differ from individual farm insurance in regard to how price and yield are determined. ARC and RLC define a loss relative to a revenue target calculated using a 5-year Olympic average (removes low and high values) of yield and price. It is unlikely that that price and yield parameters will be the same for individual farm insurance and the ARC and RLC programs. In contrast, SCO and STAX define a loss relative to prices and yield currently used by the county insurance products.

Another consideration is that both shallow loss approaches can compete against individual farm insurance. A potential risk management decision is to lower the level of individual farm insurance and to complement it with the county-level SCO and STAX insurance. Both ARC and RLC may encourage farms to buy lower individual insurance if the prices are the same in both programs since ARC and RLC have no premium. But, the negative impact of ARC and RLC on crop insurance decisions is mitigated by the less than 100% coverage of planted acres and by the payment limit. The latter in particular will be a key consideration for larger farms. As this brief discussion illustrates, the assessment of the overlap between existing crop insurance and the shallow loss programs is a complex topic that requires additional analysis, but is an issue that requires attention for both approaches to shallow losses.

In summary, the Senate and House Agriculture Committee Farm Bills increase the share of farm production risk that is covered by U.S. risk management programs by adding a shallow loss program. The shallow loss program will have different impacts by area of the county, generally favoring the Midwest where losses on average tend to be smaller than in other parts of the U.S. An alternative view is that the shallow loss program balances out the greater value of the existing crop insurance program to other parts of the U.S. due to the larger losses on average in these areas. Both bills contain competing shallow loss approaches. There is no inherent reason to have competing approaches. Thus, a key decision for the remaining farm bill debate could turn out to be which of the two general shallow loss approaches is chosen by Congress, or whether farmers should be given a choice.