The share of acres planted to corn and soybeans that will be harvested in 2012 has emerged as a topic of interest as the U.S. drought has intensified. The topic has garnered even more interest in light of the U.S. Department of Agriculture’s (USDA) August crop production report that confirmed double digit declines in average U.S. corn and soybean yields. This article examines the data since 1974 to provide perspective on the share of non-harvested acres. A simple historically-based analysis suggests that the share of corn and soybean acres reported as non-harvested in the August report may be somewhat higher than is consistent with the historical evidence since 1974. However, historical examination provides only a guide and history rarely replicates itself. Thus, this article raises an observation for consideration rather than making a conclusion. 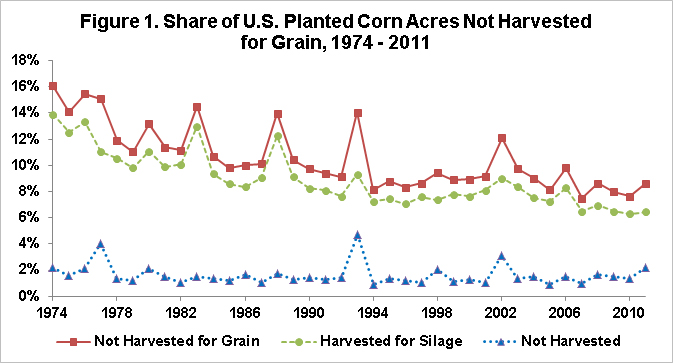 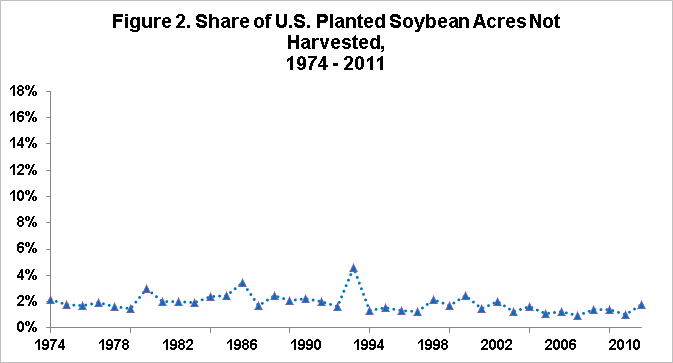 Deviation of Non-Harvested Acres from Trend 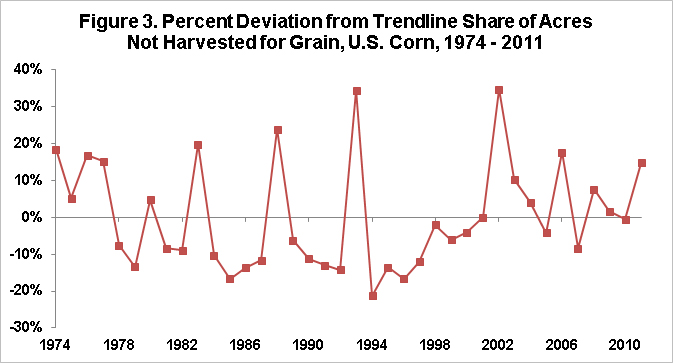 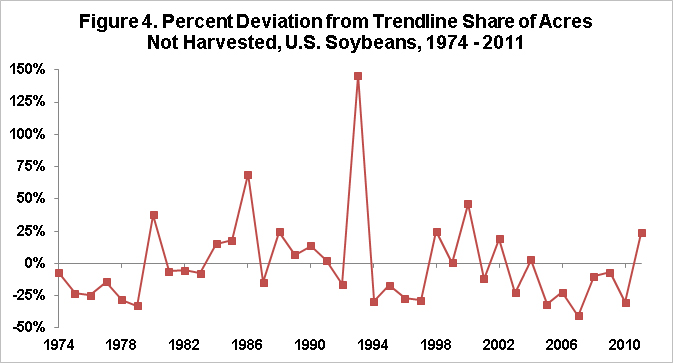 Weather factors that cause lower yields should also cause land not to be harvested. Moreover, for corn, lower yields for grain generally mean lower yields for silage. Thus, more acres of corn will be cut for silage in order to reach the desired amount of silage for the farming operation. In short, the percent deviation of harvest yield from its trend value should be of use in predicting the percent deviation in share of non-harvested acres from its trend value.

The relationship between these two measures is presented in Figure 5 for corn and in Figure 6 for soybeans. This relationship is stronger for corn than for soybeans. Specifically, the correlation between the two percent deviations from trendline is -0.65 for corn and -0.31 for soybeans. (The closer a correlation is to -1, the more strongly the variation in the variables are related to one another.) The correlations are significant at the 95% level of statistical confidence for corn and soybeans. The negative sign means that the two deviations move in opposite direction. This makes sense. Specifically, as harvested yield declines below trend value, the share of acres not harvested should increase. Conversely, as harvested yield increases above trend value, the share of acres not harvested should decrease (in other words, more acres are harvested). 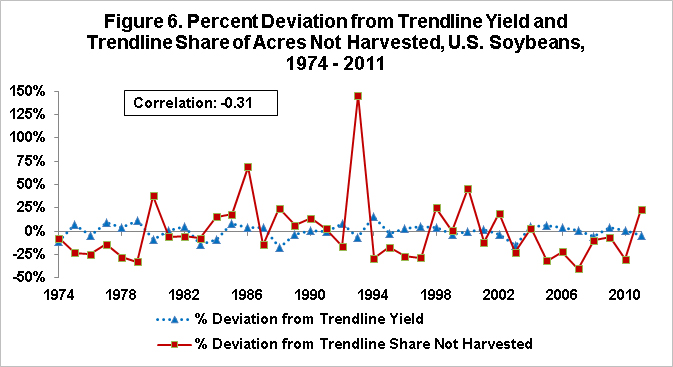 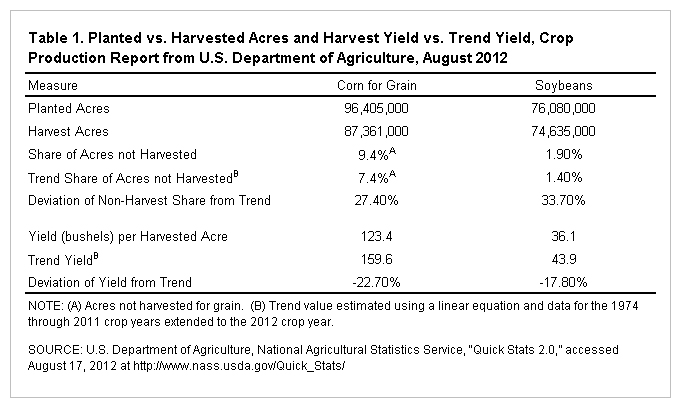 Using the trendline for 1974-2011, the estimated trend share of corn acres not harvested for grain for 2012 is 7.4%, while the estimated trend share of soybean acres not harvested for 2012 is 1.4%. Thus, the non-harvested acres in the USDA August crop production report were 27% above trend value for corn and 34% above trend value for soybeans. A larger share of non-harvested acres is consistent with a drought.

Moreover, examining the years in which yields declined by at least 10 percent from trend values also suggest non-harvested acres may be slightly less than in USDA’s August report. A ten percent decline is commonly used to define a major weather-reducing yield event. For corn, 5 years between 1974 and 2011 had yields that were at least 10% below trend: 1974, 1983, 1988, 1993, and 1995. In these 5 years, the share of corn acres not harvested for grain averaged 17% more than the trend share, which is 10 percentage points less than the 27% share in the August report. This difference translates into 95 million more bushels of corn production, using USDA’s August yield estimate. This is a 0.9% increase in the August production estimation.

One reason that non-harvested acres could be smaller than otherwise expected is that large declines in yield result in higher prices that increase the incentive to harvest.

This simple historically-based analysis suggests that the share of corn and soybean acres reported as non-harvested in the USDA August report may be somewhat higher than is consistent with the historical evidence since 1974. Thus, production maybe somewhat higher (less than 1 percent) than in the August report. However, historical examination provides only a guide and history rarely replicates itself. In other words, variation exists that the analysis does not pick up and each year is unique. Thus, the analysis raises an observation for consideration rather than making a conclusion.