Farmer-paid premium changes between 2012 and 2013 are mixed. Table 1 shows premiums in 2012 and 2013 for Washington County, Illinois. For the same coverage level, Revenue Protection (RP) premiums in 2013 are higher than in 2012. However the guarantees implied by each coverage level are higher in 2013 due to a higher projected price. Even given the same projected price and volatility, Washington County RP premiums would be higher in 2013 due to changes in insurance rates. Group Risk Income Plan with the harvest price option (GRIP-HR) has lower premiums in 2013 as compared to 2012. 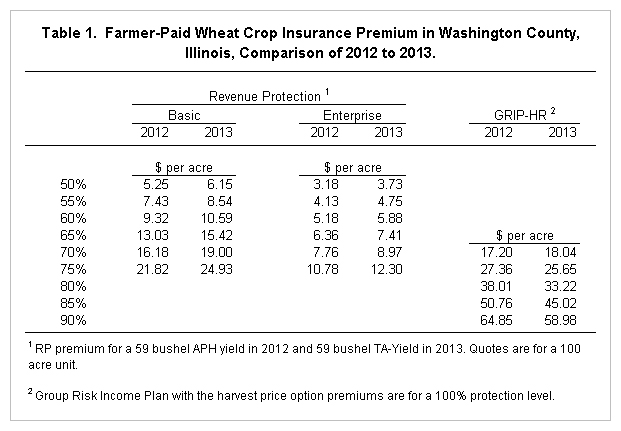 Even given the above changes, general guidance for crop insurance choices does not differ from previous years. If RP or another plan within the COMBO product is selected, use of the TA yield endorsement is warranted. Use of a crop insurance product with the harvest price option seems prudent, meaning that many producers will choose RP or GRIP-HR. The choice between RP and GRIP-HR may come down to one of preferences: individuals more concerned about yield losses likely will find RP better while producers concerned with price declines likely with find GRIP-HR more appropriate. Weighing the higher premiums associated with GRIP-HR likely will also enter into the choice between RP and GRIP-HR. High coverage levels may be advisable, given the possibility that prices could fall.