Crop insurance harvest prices for corn and soybean in the Midwest are determined during October. Most farmers insured using either Revenue Protection (RP) or Group Risk Income Plan with the harvest revenue option (GRIP-HR), both of which have the guarantees based on the higher of the harvest or projected price. Harvest prices will be above the projected prices this year. Because of large yield losses this year, RP and GRIP-HR will make larger payments with higher harvest prices.

Projected and likely harvest prices in 2012

Projected prices are based on settlement prices of Chicago Mercantile Exchange (CME) futures contracts during the month of February (December contract for corn and November contract for soybeans). This year, the projected price for corn is $5.68 per bushel for corn and $12.55 per bushel for soybeans. Harvest prices are based on settlement prices of CME contracts during October. As a result, harvest prices will not be known until the end of October. During the first week of October, CME prices on the December corn and November soybean contracts suggest that corn’s harvest price will be about $7.50 and soybeans harvest price will be about $15.50.

Many farmers will have yield losses that cause RP and GRIP-HR payments. Given yield losses and harvest prices above projected prices, higher insurance payments will occur with higher harvest prices. This is illustrated in Table 1, which shows payments for an 80% RP policy having a 185 bushel Trend-Adjusted Actual Production History yield. 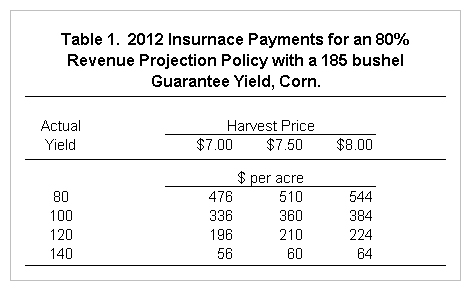 Due to yield losses caused by the drought, many farmers will receive large insurance payments if they purchased either RP or GRIP-HR at relatively high coverage levels. The size of these payments will be impacted by the harvest price. Increases in harvest prices in 2012 are comparable in percentage terms to increases in 1988, a year in which a severe drought also occurred.