Managing crop revenue risk is of critical importance for financial success by agricultural producers and a central theme of many government commodity and insurance programs. Debate surrounding the farm bill for example, includes various programs intended to limit revenue variability that arises from low crop prices, production declines as might happen under a drought, and so forth. Crop insurance is critical for most commercial scale producers to protect against the consequences of poor relative crop performance or price declines, but is remains debated whether price risk or yield risk is more likely to influence insurance payments. In general, farm-level crop revenue risk results from price variability, yield variability, relationships between prices and yields, and relationships among the crops produced. It is important to first understand the underlying causes of crop revenue risk to better assess the effectiveness of various strategies and programs that might be used to mitigate crop revenue risk. Improving the understanding of the relative influences of price and yield risk is the intent of this farmdoc daily post.

To begin, it is clear that in the heart of the Corn Belt, prices and yields tend to move in opposite directions. This negative correlation is particularly evident this year as evolving prospects for lower yields due to widespread drought have led to commensurate market price increases resulting from efforts to balance supply and demand factors. Likewise, each crop production report release, acreage or yield estimate revision, or update to estimates of world production and use is met with price responses of the opposite direction compared to the understood impact on production. Aggregate level effects are relatively most pronounced, and while intense production areas have generally similar effects, the strength of the relationship tends to decline down to the individual producer level, but overall maintains the negative relationship between price and yield. This effect is sometimes referred to as the “natural hedge” and the size of its impact could be useful to better understand. There are various technical methods for decomposing variability into source components, but applications to farm revenue series are complicated by the evolving yield levels (trending upward) and by price regimes that seem to have epochal differences in general levels through time due to new markets such as ethanol, and year-to-year effects from carryover supplies and acreage shifts through time. Measuring the correlation at a point in time is thus an inexact idea, but there are useful approximations that can be used.

To begin to address this issues, yield data for each of the counties in Illinois were collected and detrended, or put onto a current basis using methods similar to those used by the Federal Crop Insurance Corporation to detrend yields under the Trend-Adjusted APH Endorsement. Failure to control for the trends through time can result in substantially overstated measures of risk. In essence, the impact of yield increases through time is added back to historic yields so that deviations around a current yield that would be expected from the historic deviations from trend can be used to proxy yield risk at a point in time. Prices present a bit more of a challenge. For the analysis presented below, the perspective of the modern crop insurance program provides a useful guide. Each year, the Projected Price is established at roughly the time of planting decisions using the futures markets to determine. The Harvest Price is then determined during the month of October (historically November as well), as a proxy for actual available price to a farmer. A constant basis is assumed through time, and while that may not be a good assumption for many local markets, it does not materially affect the conclusions related to sources of risk. To construct the associated “current” price distribution, each year’s percentage price change from Projected to Harvest price was computed and the distribution of price changes applied to a base price from this year’s experience. All results are presented for corn. Soybeans have similar but somewhat more muted features and slightly higher shares of price risk and slightly lower correlation effects. Figures 1 below helps illustrate the resulting measures and show the movements in prices and yields within a year are generally opposite in sign and of roughly similar magnitudes in most cases. 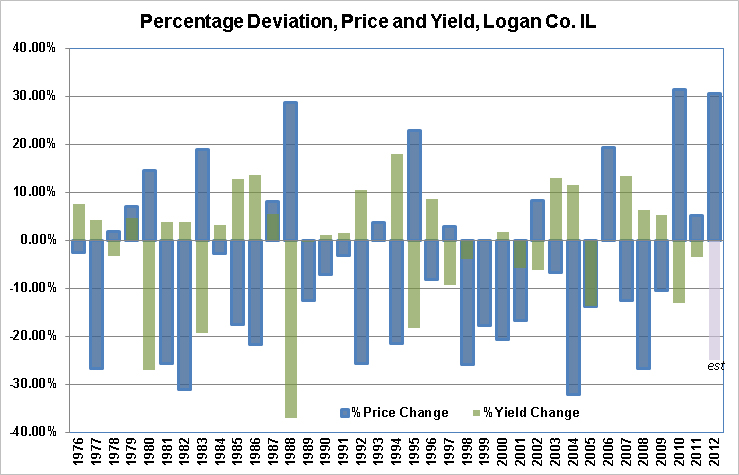 This process was repeated for each county in Illinois and the degree of relatedness summarized in terms of the correlation.1 The figure below summarizes the results. As shown, the most intense production regions generally have the strongest (most negative) relationship between yields and prices. Overall, the state average price-yield correlation is -.51 with a low of -.72 and a high of -.31. The correlation can generally be interpreted as the average proportionate change from one to the other, so a value of -.51 would imply that prices and yield respond in opposite directions with about half as large a relative magnitude – or that 51% of an increase in one variable is offset by a decrease in the other. 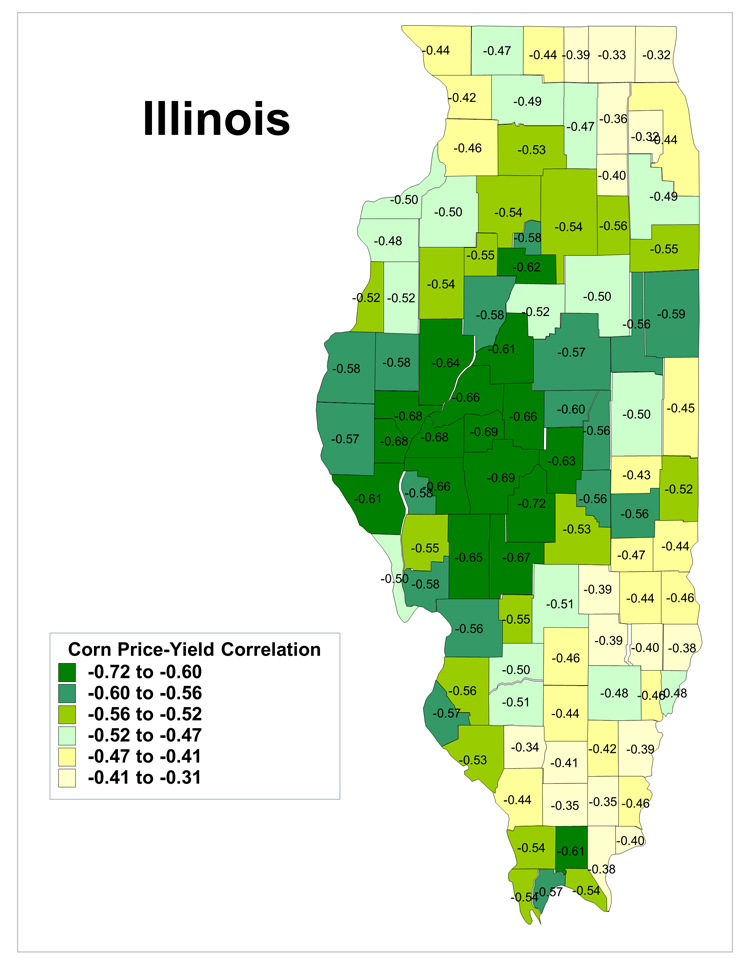 Next, a current revenue distribution was constructed for each county using the detrended yields and associated normalized price series. The expected or average revenue cannot be constructed by simply multiplying the average price times the average yield due to the correlation effect. In technical terms, the expected product of price and yield is equal to the product of the averages plus the covariance. In this case, the covariance is negative as described above, so the actual average revenue is less than the simple product of the average price and average yield, but the revenue risk is also proportionately lower the more negative the correlation as well. These relationships lead to a natural question – which is more important to revenue variability, price or yield; and what role does the negative correlation play in mitigating the risk.

To decompose the revenue variability, a simple technique was used that allows an analog of the risk from price to be isolated as well as the risk from yield. First, from a series of related yields and prices through time, the price is held constant at its mean and the revenue variance calculated allowing the actual yield changes observed. Then, the yield is held constant and the revenue variability calculated allowing the actual price changes observed. If there were zero correlation, the sum of these would equal the total observed risk.2 The actual total risk, however, is less than the sum by the amount that must be attributed to the effect of the negative covariance. The process of first holding prices constant and using actual yields, and then holding yields constant but reflecting actual price changes, and then comparing the total component variance to the actual was done for each county in Illinois for corn from 1975 to 2011. The fractions of the total variance and impact of correlation were then calculated. Table 1 below contains results for selected representative counties around the state, and the average across all counties. 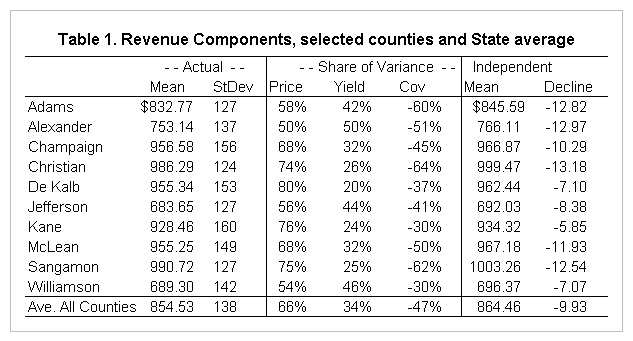 Consider Adams County where the actual average revenue per acre for corn is $832.77 and the standard deviation of revenue is 127 using the procedures outlined above. The share of the variability attributable to price risk is 58% and the share attributable to yield risk is 42%. The Covariance effect reduced the actual variance from the component variance by 60%. In other words, if the price and yield were completed independent and varied with no relationship to each other, the actual variance of revenue would have been 60% higher. Likewise, had the price and yield series been independent, the actual average revenue would have been $845.59 implying that the covariance also reduced the average revenue by about $12.82/acre.

Alexander County has the highest share of yield risk of any county in Illinois at 50% while the relatively lower yield risk counties such as Christian, DeKalb, and Sangamon represent low yield risk cases where price is the primary driver of revenue variability. Across the state, price risk represents about 66% of the cause of revenue variability and the natural hedge or negative correlation reduces the total risk by 47% compared to a case of independence.

Overall, the price risk is found to be generally more influential on revenue variability than yield risk, and the correlation effects result in nearly a halving of the total variability compared to complete independence. These results do help support anecdotes that crop insurance has become a price risk program as much as a yield risk program, but that interpretation also adds to its usefulness in managing crop revenue risk. Areas of the state with relatively risker production have larger shares of overall crop revenue risk from yields, but the price and correlation effects are still at least as important.

1 The correlation is a standardized measure of the relative movement between two series ranging from negative one to positive one. A value of negative one indicates that the series move exactly oppositely in identical proportions. A value of positive one means that the series move in lockstep fashion. A value of zero indicates no relationship at all between the movements in the series. The covariance between two random variables likewise relates the paired movements in the same scale as the variables themselves. Correlation is calculated as the covariance divided by the product of the standard deviations.

2 The actual calculations are slightly more extensive involving squared means and variances as well as the covariance between squared values of each series. Details of the numeric procedures are available upon request.

Note: The views expressed herein are solely the author’s opinions and do not necessarily reflect those of entities with whom professionally affiliated. All errors and omissions are the author’s alone.