For most corn and soybean acres, crop insurance uses the average December corn futures price and average November soybean futures price during the months of February and October. The October price will be referred to as the harvest price. For 2012, the February prices are $5.68 per bushel for corn and $12.55 per bushel for soybeans. The harvest prices are $7.50 for corn and $15.39 for soybeans. Thus, the HPO option increases per acre insurance payments for corn and soybeans by 32% and 23%, respectively

The impact of HPO upon insurance in 2012 is presented visually by comparing the revenue that insurance will guarantee when the harvest insurance price is used compared with the revenue that was expected in February. The revenue expected in February was calculated as the trend-adjusted yield times the February insurance price. The revenue guarantee was calculated as the trend-adjusted yield times harvest insurance price times the coverage level for individual farm crop insurance. Coverage levels vary from 50% to 85% in 5 percentage point increments. The data used in making these calculations were for Champaign County, Illinois; but, because the presentation is in terms of ratios or relative values, it applies to all situations. 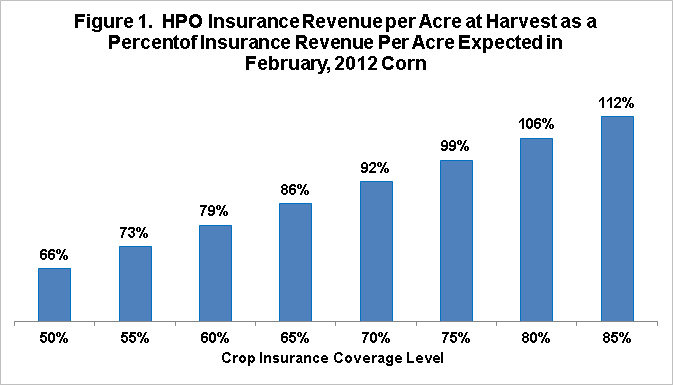 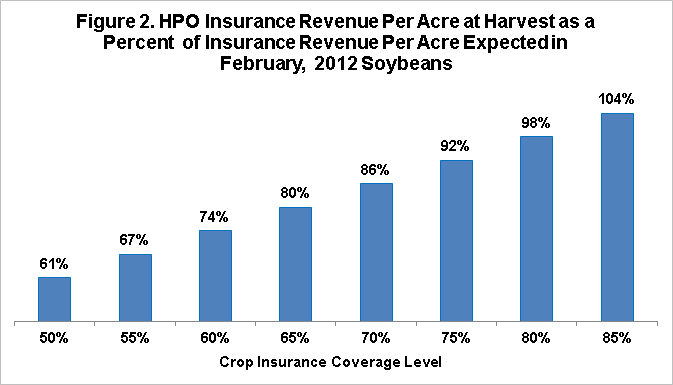 Critics complain about the increased cost resulting from HPO in 2012. However, they are also concerned that, as Figures 1 and 2 illustrate, at coverage levels that were commonly purchased for corn and soybeans in 2012, the insurance payment could result in a farm having more revenue than was expected in February. They wonder whether a foundation idea behind the farm safety net is being violated: that a loss is shared between the farm and public. It is important to note that the HPO debate is not over whether the cost of HPO in crop insurance is priced appropriately or whether HPO should be an option in crop insurance. The debate is over whether or not the public should subsidize HPO.

A simple analysis is conducted using the pre-planting and harvest insurance prices for corn, upland cotton, grain sorghum, soybeans and wheat. These prices are obtained from data sets compiled by Dr. Art Barnaby at Kansas State University and the Risk Management Agency. The wheat price series are based on the Chicago wheat contract. The price data begin with 1974. The analysis stops with 2006. The reason for selecting this period is that prices had no trend over this period ((see the farmdoc daily post by Scott Irwin and Darrel Good, “A New Era in Crop Prices,” available here). Trends can substantially affect the validity of statistics, including measures of risk. The reason for using this set of commodities is to see if regularities emerge since HPO applies to most insurance contracts. Yield is calculated for the U.S. and is on a planted acre basis, including adjustments for corn and sorghum silage acres. A trend yield is calculated for each year based on the 1974-2006 yield trend. A share of production is sold at the pre-plant price, with the remaining production sold at the harvest price. Any forward selling in excess of the harvested production is bought back at the harvest price.

A common pattern exists. Some forward selling causes the ratio of average revenue to the standard deviation of revenue to increase, but after attaining a maximum the ratio begins to fall as additional forward selling occurs (see Figure 3). The rate of decline usually becomes more pronounced as forward selling approaches 100% of expected production. 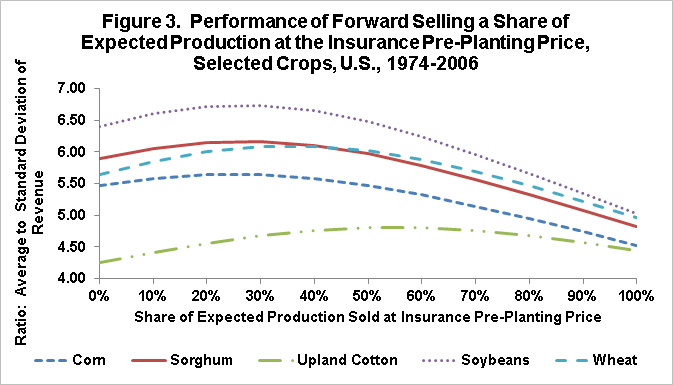 Unsurprisingly, the share of production at which the pricing performance ratio is at its highest varies by crop. However, with the exception of upland cotton, the maximum ratio falls between 20% and 31% of expected production. The average ratio across all 5 crops is 30%. Moreover, 78% of the increase in the cotton ratio is achieved at a 30% forward selling ratio. As an aside, I have asked probably over 100 farmers over the last 30 years what their experiences have taught them about the amount to forward contract? By far, the most common answer is between 1/4 and 1/3 of expected production before planting. This unscientific evidence is not inconsistent with the simple analysis conducted here. 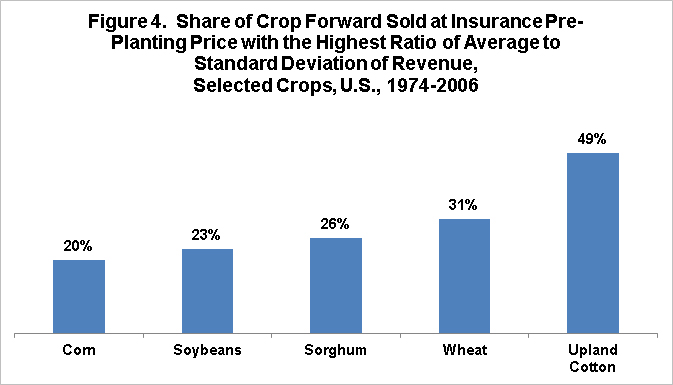 Prior to the 2011 crops, farms elected HPO as an insurance feature when making insurance decisions. With the launch of the so-called COMBO policy, HPO is the default and farms elect out of HPO. Thus, it is more appropriate to call it the harvest price exclusion (HPE). Nevertheless, harvest price option remains commonly used.